"Dynasty" returns shiny and new, but could use some old tricks 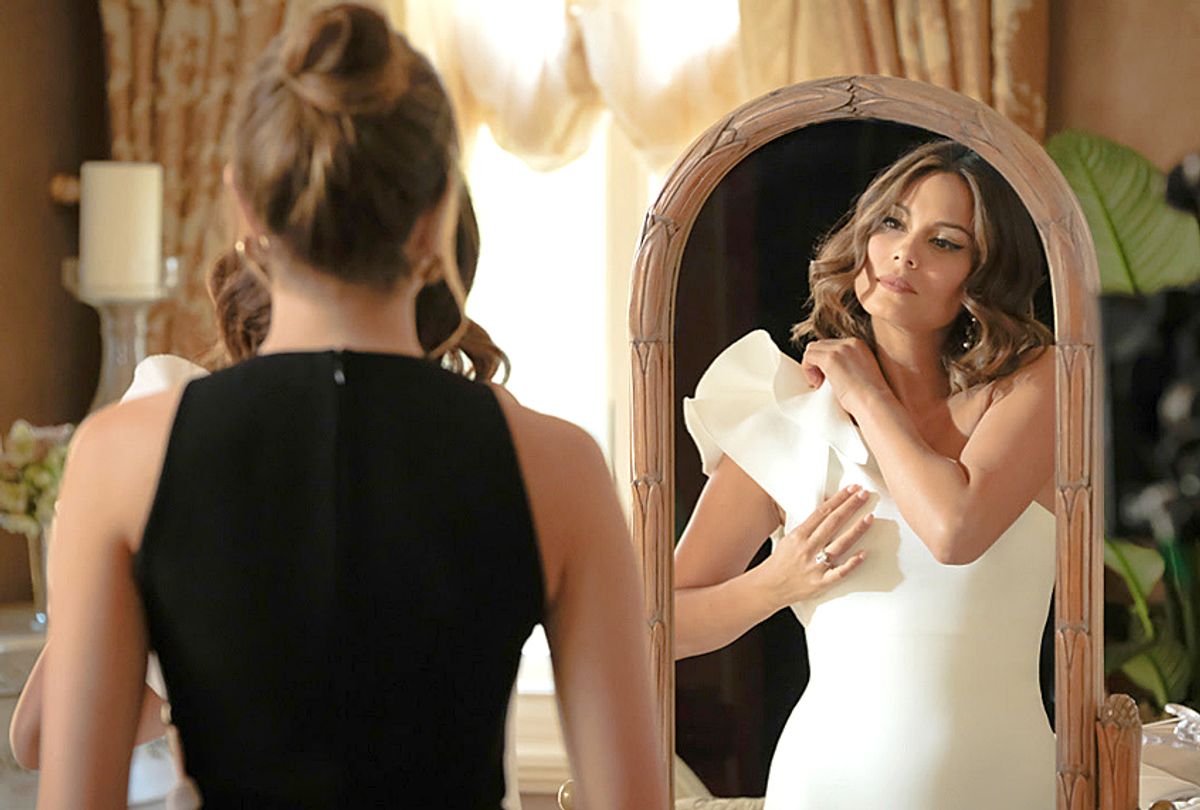 Good shows open with neat packages. An early scene in the original “Dynasty," for instance, features Krystle Jennings (Linda Evans) enjoying a bridal shower with her old 9-to-5 gal pals at the office. Tucked into sheet cake and drinking out of paper cups, Krystle and the girls are opening gifts, including a telltale tiny box from her fiancé Blake Carrington (John Forsythe). Blake didn’t want to be bothered to deliver the gift himself, sending it via a servant.

And inside the box? A pair of enormous pear-shaped diamond studs. The ladies coo enviously (despite the fact that they look like a prize a child could win Chuck E. Cheese.)

But the scene’s overall message told viewers all we really needed to know about the series that would become a giant among primetime soaps. Krystle Jennings embodied the conventional, presumed dream of the girl in the secretarial pool: plucked obscurity by the multimillionaire boss and set down, gently, in a world of extreme wealth.

“I won’t change,” she whispers to her friends. “I swear it.” The world Krystle was stepping into forced her to break that pledge; Blake Carrington’s new wife hadn’t met his ex Alexis Carrington Colby (Joan Collins). Soon enough, Krystle was catfighting with the best of high society’s grand dames, slapping her challengers into lily ponds and down staircases.

“Dynasty” screamed too much in every regard. Collins played too much to the groundlings watching at home. The shoulder pads were the size of zeppelins, and the jewels seemed to howl with fakery. It was all part of the magic.

In 1981, its version of the average-girl-makes-good story found purchase with an audience witnessing the rise of unfettered excess and materialism on Wall Street. The original "Dynasty" sold the fantasy that outsize wealth could be just one fortunate marriage away while making the average person relieved they didn’t have to deal with the bitches that came with the package.

No such sparkle glistens on The CW’s “Dynasty” reboot, stepping out for the first time Wednesday at 9 p.m. On the contrary, its downfall is a consistent failure to go far enough with drama and camp. The cast isn’t taking the story too seriously, that much is obvious. But it’s also plain to see that they want us to know that they’re deadly serious about doing justice to the original. They shouldn’t be.

This is where the new “Dynasty” gets stuck. Like a person wearing a sequined gown while shopping at a grocery store — at 11 in the morning, on a Tuesday — it’s begging for attention while engaging in the banal in a setting that makes very easy for people to ignore it. We’ll just take another aisle, thanks much.

The primetime soap has evolved appreciably since the days of the Carrington-Colby feud in no small part because of the work of the executive producers of the new “Dynasty.” Josh Schwartz and Stephanie Savage gave the world “The O.C.” and “Gossip Girl,” while Sallie Patrick gifted us with “Revenge” which, when it was good, was very, very good.

All of these series contained a strain of honest feeling that the first “Dynasty” sidestepped in favor for deliciously old-fashioned melodrama. And among The CW’s young female target audience, most of whom presumably haven’t seen the original, the similarity between this new “Dynasty” and some of its recent kin should serve as a plus.

The minus is that there’s nobody to root for. Besides, we already have a "Dynasty" for the 2010s. It's called "Empire," and as homages to the original go, the Fox series gets it right.

However Schwartz, Savage and Patrick admirably update Esther and Richard Shapiro’s original creation to reflect the world today's viewers know. Cristal (Nathalie Kelley) and Sammy Jo (Rafael de la Fuente) are played by Hispanic actors, and Sammy Jo is male. Today's Cristal is less subordinate to Blake (Grant Show) than yesteryear's Krystle was; she’s an executive in his company with a seat at the boardroom table.

Representing the Colby side of the equation is Jeff Colby, played by Sam Adegoke, a black actor. Other aspects aren’t that far off. Steven Carrington (James Mackay) is gay and more sensitive to the needs of everyday folks than his sister Fallon (Elizabeth Gillies), the clan’s Ivanka.

To underline that comparison, the pilot opens with a montage of publicity footage featuring the Kardashians, the Murdochs and the Trumps. Only one of those clans could possibly be referred to as dynastic. The others are merely skilled at playing super rich and entitled on television.

I suppose it’s all in how you define the term, right? Anyway the heart of the matter is in Fallon’s narration layered over that visual: “Like it or not, we live in an age of dynasties. Who else can you trust to run the family business, except family?”

The answer comes later as Blake shocks Fallon and Steven by leaping into a wedding with Cristal in the backyard, which happens after we see a number of subplots with all the juice of jerky: Fallon’s banging the chauffeur (Robert Christopher Riley)! Steven’s got his own tryst that comes back to haunt him! And the family butler Anders (Alan Dale) is convinced that Cristal is a hussy – which would be predictable, interesting and lend the whole story some pizzazz.

We’ve see all of these set-ups before in “The O.C.” and “Revenge,” Aaron Spelling’s shows and a number of series that graced the line-up of ABC Family.

While there’s something adorably kitschy about watching Kelley theatrically flounce down the bridal path to David Bowie’s “Modern Love” as Cristal rubs Fallon’s face in the fact that she's her stepmom — and they’re both in their 20s — this is one moment in an hour impoverished in entertainment value or originality. And it's not enough to merit our attention, not with the likes of Cookie Lyon firing up "Empire" every week.

It would be fine for “Dynasty” to be derivative if it weren’t so darn bloodless. The opening montage tells the tale: we’re already up to our necks in watching rich families masquerade as dynasty powers while the world holds its breath in fear of oblivion. They’re already giving us quite the show, filled with black comedy, characters detached from reality and unpredictable twists. If a “Dynasty” reboot can’t outdo reality by lampooning the artifice of it all, what’s the point?