Clearwater has become a victim of its own charm, and independent hotel owners are struggling 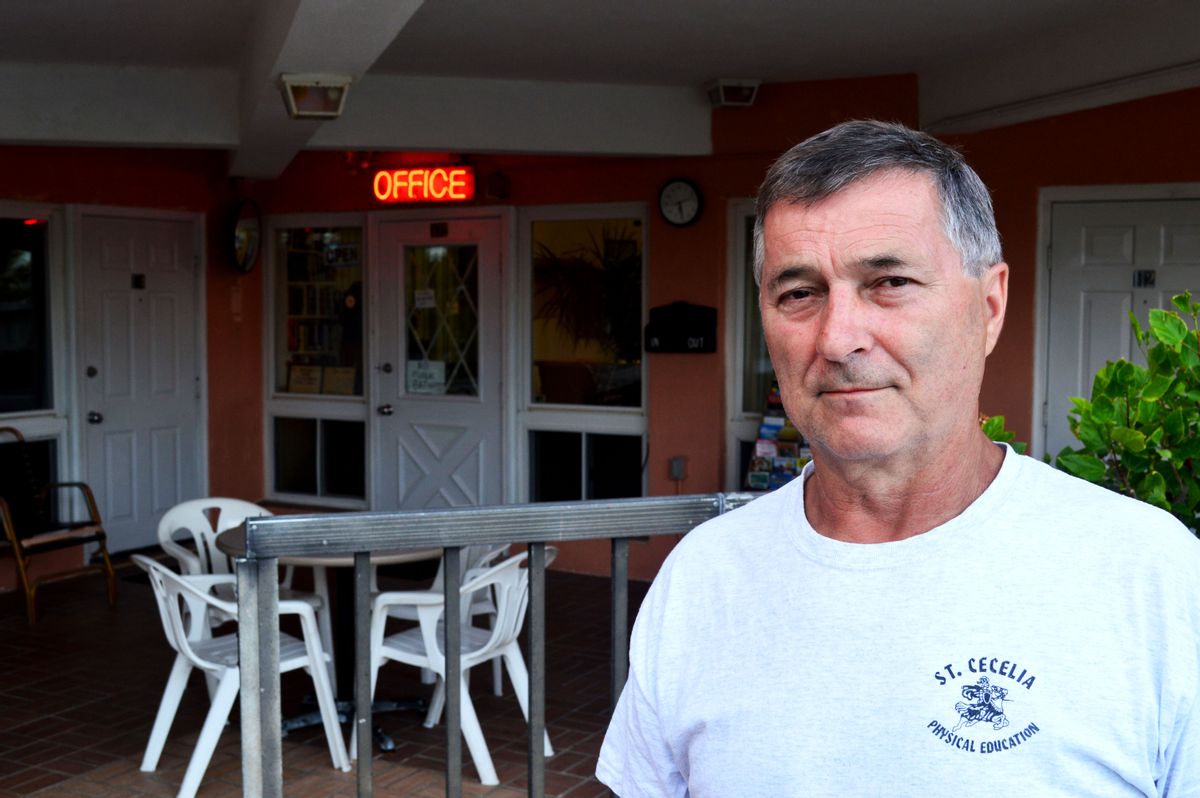 The rattle of construction wakes guests early at the New Yorker Motel. But the noise isn't coming from renovations for the independently owned business on Clearwater Beach. It’s for the mega hotel next door.

In the past few decades, Clearwater Beach has transformed from a small beach town into a tourist destination. In 2011, USA Today named Clearwater Beach one of the country’s best. Over 6 million people visited St.Petersburg/Clearwater in 2016.

According to TripAdvisor, there are currently 98 hotels in Clearwater, and as the Tampa Bay Times reports, the beach will see thousands of hotel rooms added in the next few years. The most recent new hotels have been those with familiar names like Hilton, Hyatt Regency, Hampton Inn and Marriott.

“Most of the small hotels are gone to the developers,” says Edward Chzaicki, owner of the New Yorker Motel, “and only few small motels like us are left.”

But not everyone wants to stay in a fancy, new place.

Suliga booked reservations at Sands Point Motel, a spot down the street from Chzaicki’s place. Suliga, who visits the beach from Chicago, sits with her mother at a tiled table near the pool and shuffleboard court, a nod to Florida’s not-so-distant past.

The two eat instant noodles as rain begins to drizzle.

“We were here three years ago, and a lot has changed,” says Suliga. “It’s good to support local business.”

The motel next door, though, doesn’t have anyone sitting by its pool.

People who managed the motel had already taken down its sign (but a Google map search revealed it’s the Amber Tides Motel).

“There’s not much to say,” says Ulli, one of the motel managers. “They’re going to tear this place down November 1st to build something new.”

Chzaicki says these big hotels have driven tourists to the beaches, but that hasn’t necessarily been good for the independent hotels on the strip. Their all-important beach views has been blocked, and the never-ending noise has driven away potential guests.

They’ve also made a mess.

Pieces of wood have fallen near his building. Dirt and debris float into his pool.

“I asked the supervisor of construction to clean up,” he says, “and they have not responded.”

Originally from Poland, Chzaicki moved to the state in a different era. He’s lived in Florida with his wife and two children for 16 years. For the most part, they have enjoyed their time.

“There’s great weather, a great state,” he says. “Everything was very good until the construction start next door.”

He says he charges $70 a night, but his low prices haven’t helped much to attract guests.

And, Chzaicki says, the city isn’t helping them.

“The city is raising the tax because they say the property tax go up,” he says. “But for such a small motel like us, we don’t have any effect of the going up of the property. It doesn’t give us nothing.”

Chzaicki has tried to sell the hotel, but he hasn’t had any luck.  If he doesn’t find a buyer soon – or somehow find a way to attract guests – he doesn’t know how much longer his business can survive.