What is causing President Trump to make these outrageous claims? 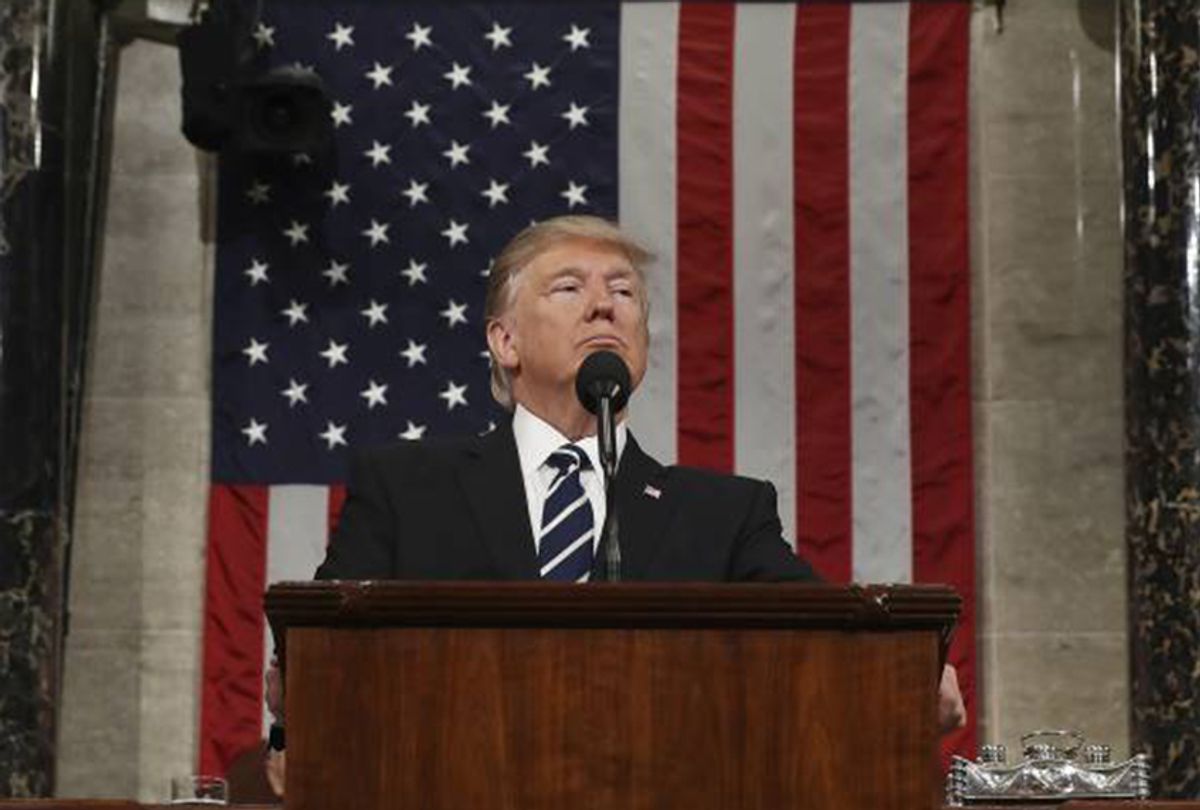 For Donald Trump, lying comes as easily as breathing, and perhaps it's even more effortless. He makes up falsehoods about not only big political issues or even sensitive personal matters, but everything. That includes the small stuff, especially if he thinks the lie will make him look good.

If he were smarter, he might choose not to lie about things that can be disproven with a Google search. As it stands, Trump’s claims about his achievements are pretty easy to discredit. That includes his lies about things he’s invented, a list that includes words, ideas, even nicknames. Because the only thing Trump has ever really invented was the idea of selling steaks through the Sharper Image catalog.

Here are five things Trump has lied about inventing.

On Sunday, Trump sat down with Mike Huckabee for an "interview,” if that is what you call it when one person compliments and stares adoringly at another person for half an hour. During this "conversation" — if that’s the word for a meeting between a sycophant and a narcissist fully acting out their respective roles — Trump decided to discuss his invention of the word “fake.”

"The media is — really, the word, one of the greatest of all terms I've come up with, is 'fake,'" Trump said. "I guess other people have used it perhaps over the years, but I've never noticed it."

The most fascinating thing about Trump’s contention is not that it’s patently untrue, but the unvarnished blend of insanity and stupidity in its suggestion that Trump invented a word that’s been in common parlance for hundreds of years. Merriam-Webster points out that usage of the word “fake” dates back to the 15th century. Even giving Trump the benefit of the doubt and assuming he actually meant to take credit for the term “fake news,” the claim still doesn’t hold up. Merriam-Webster points to specific citations of that phrase in the late 1800s.

If you want to watch the entire Trump-Huckabee “discussion” — if that is the way to describe what happens when an owner makes a dog sit very still with a treat on its nose in some cruel, torturous approximation of a trick — it’s in the video below. It includes Huckabee calling Trump a “rock star,” among other embarrassments.

In May, Trump spoke with editors from the Economist, a publication staffed by people who know a lot about economics, the dead giveaway being the fact that it’s called the Economist. Unfortunately, there were no cameras running during the interview, so we can’t see the look on the editors’ faces when Trump insisted he invented a well-established economic theory.

ECONOMIST: But beyond that it’s OK if the tax plan increases the deficit?

TRUMP: It is OK, because it won’t increase it for long. You may have two years where you’ll… you understand the expression “prime the pump”?

TRUMP: We have to prime the pump.

TRUMP: We’re the highest-taxed nation in the world. Have you heard that expression before, for this particular type of an event?

TRUMP: Yeah, have you heard it?

TRUMP: Have you heard that expression used before? Because I haven’t heard it. I mean, I just… I came up with it a couple of days ago and I thought it was good. It’s what you have to do.

Is there anything better than the end of the exchange, when the Economist editor, befuddled and stunned by the whole dumb conversation, starts to repeat Trump’s own words back to him, and instead of listening, Trump plows onward, proudly ignorant and obnoxious? Congratulations, America! You elected Michael Scott president.

There’s also the fact that Trump says he “came up with [‘prime the pump’] a couple of days ago,” despite the fact that he used the phrase multiple times before the Economist interview. Once while he was on Fox News a month prior, and twice during media appearances in 2016.

For the record, the New York Times notes that prime the pump “was in wide use by 1933, when President Roosevelt fought the Great Depression with pump-priming stimulus.”

During the election, Trump riled his base of racists and xenophobes with promises of a useless, costly southern border wall to keep brown immigrants out. It wasn’t a new idea — a barrier that runs 850 miles along the dividing line was erected by Bush 43 in 2006, and the border patrol was put in place in 1924. But Trump accused his GOP primary competitor Ted Cruz and others for stealing an idea that hadn’t been his to begin with.

"People are picking up all of my ideas, including Ted, who started talking about building a wall two days ago," Trump told Politico in January 2016.

During an episode of Face the Nation, Trump said, "I was watching the other day. And I was watching Ted talk. And he said, 'We will build a wall.' The first time I've ever heard him say it. And my wife, who was sitting next to me, said, 'Oh, look. He's copying what you've been saying for a long period of time.'”

"Every time somebody says we want a wall, remember who said it first," Trump said at a New Hampshire rally. "Politicians do not give credit."

That seems to include “politicians” named Trump who rip off the many racist politicians who have come before them.

Added bonus: Trump also stole an idea for putting solar panels on the wall. From a veteran.

4. The nickname 'Rocket Man' for the Supreme Leader of North Korea.

Hilariously, White House staffers have talked up Trump’s use of “Rocket Man” as a nickname for Kim Jong-un as proof that he’s a real-life Don Draper. “That's a President Trump original,” Sarah Huckabee Sanders said on Fox & Friends. “As you know, he’s a master in branding.”

Actually, this one may come as a bit of a surprise because it seemed just dumb enough to be a believable Trump (via Elton John) invention. But even this Trump creation originated somewhere else.

The cover of the July 8, 2006, issue of the Economist featured then-North Korean Supreme Leader Kim Jong Il blasting off toward the sky, clouds of smoke billowing from his feet. “Rocket Man” the caption read, an allusion to the dictator’s nuclear ambitions. Trump has reapplied the moniker to his successor and son, Kim Jong-un, who by all indications he seems to think is the same guy. What a shock that a raging racist can’t tell two totally different Asian men apart.

This isn’t to suggest Trump ever read an issue of the Economist aside from the one he was featured in (and even then, he probably only skimmed one-third of his interview). Maybe he saw it when he did an image search for “The Economist” the night before his interview.

Trump told the Washington Post that the day after Mitt Romney’s 2012 loss, he got to work on a new slogan for his campaign.

When Trump says America was “great before,” he is obviously referring either to the days of Jim Crow or slavery or Native American genocide, because that pretty much covers America up until this moment. For the record, "Let's Make America Great Again" was used by Ronald Reagan’s 1980 election campaign. It seems fairly likely that Trump, who was a fully grown adult of voting age at the time, picked it up there. Realizing he might be called out on this, he responded with proactive defensiveness.

“But he didn't trademark it.”