"A season in Hell": The making of Patti Smith's "Horses" 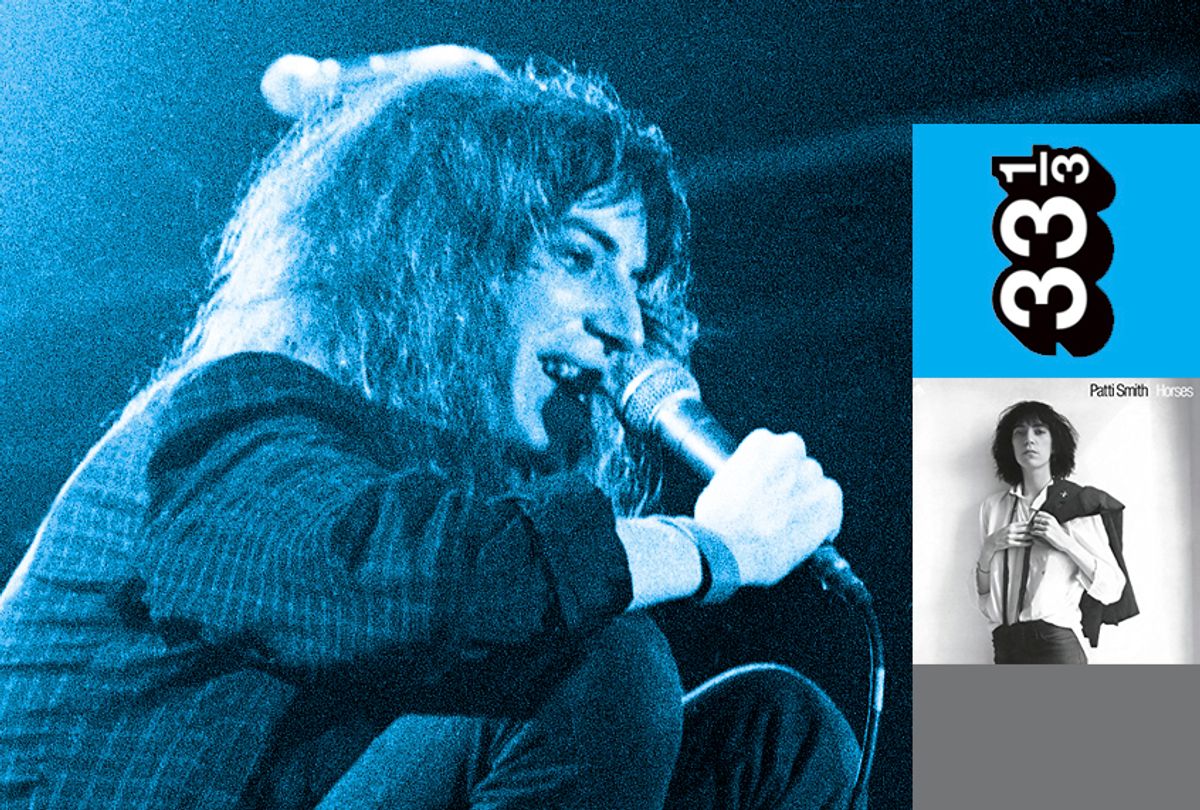 Given their positive experience the previous summer, it seemed natural for the band to return to Electric Lady. Situated on Greenwich Village's then seedy Eighth Street, the historical studio, with its wallpapered basement, psy­chedelic murals, mood lighting, and curvaceous, womb­like interiors, provided an appropriate setting for a band embarking on the difficult task of reinventing itself. Initially, the task seemed clear enough: transpose the live sound to vinyl. But the band were savvy enough to realize that only the most experienced producer would be able to recreate the spontaneity of a live performance within a studio setting. After some deliberation, Smith decided to approach John Cale. Later, in conversation with Dave Marsh (1976), Smith claimed, "My picking John was about as arbitrary as picking Rimbaud. I saw the cover of "Illuminations" with Rimbaud's face, y'know, he looked so cool, just like Bob I looked at the cover of "Fear" [Cale's 1974 record] and I said, 'Now there's a set of cheekbones."' Cheekbones aside, Cale seemed an appropriate choice for a band weaned on the art brut aesthetic of the Velvet Underground. [Drummer] Jay Dee Daugherty, moreover, had spent time with Cale in the late 60s during his tenure as Stooges producer, and had warmed to his affabil­ity and his no-nonsense approach to the recording process. That both assumptions were wrong became rapidly appar­ent. Since leaving the Velvet Underground, Cale, inspired by the example of Brian Wilson and the Beach Boys, had developed a much more symphonic approach to music­making. On records like "Paris 1919" (1972), he had opted for a lush, orchestral sound, and for the Patti Smith album he was keen, initially at least, to push the band in a similar direction. From the outset, however, his attempts to recre­ate the multitracked opulence of recordings like "Pet Sounds" met with fierce resistance. In the studio he found Smith to be domineering and single-minded; the singer, for her part, objected to Cale for precisely the same reasons.

On one point alone did Cale's desire for sonic perfection meet with band approval; noting that the band's equipment was irredeemably road-worn—the warped necks of Kaye's and Kral's guitars were of particular concern—he insisted that a sizeable portion of their advance be spent on new instru­ments. Once the band plugged in, however, the arguments continued, with the battles of wills stemming particularly from the relationship between Smith and Cale. Alternating between bouts of manic energy and moments of near-vio­lence, Cale and Smith had become creative sparring partners, as she informed Crawdaddy: "How am I getting on with John Cale? It's like a Season in Hell. He's a fighter and I'm a fighter so we're fightin'. Sometimes fightin' produces a champ" (Shapiro, 1975). To Rolling Stone's Dave Marsh she added, "All I was really looking for was a technical person. Instead, I got a total maniac artist. I went to pick out an expensive watercolor painting and instead I got a mirror" (1976). A few months later, Smith sought to distance herself further from Cale's influence, claiming that "he had nothing to do with anything. I mixed the record myself .... The album was spewed from my womb. It's a naked record. We ignored all Cale's sug­gestions" (Jones, 1976). The words are telling: one way to read the record is as a documentation of Smith's struggle to occupy, possess, and displace the order of the phallus. As we shall see, her claim to have "spewed" the record from her "womb," without Cale's assistance, signifies to some extent the artist's frustration at not being able to do away, entirely, with the phallic regime.

But amidst this frustration we encounter glimpses of what it might be like to upset this regime, as Smith went on to explain to Tony Glover: "in some of my songs I take on different personas .... Cool thing was that John [Cale] was into the chameleon thing, the changeling aspect—and I wasn't made to feel guilty or nervous about any of the subject matter" (1976). Isolated in the subterranean confines of the studio, with sessions running from five in the morning to eleven at night, resuming the next day at noon and running through to six AM, the band and their producer thus became "caught in the common obsession of getting it down." As Glover reflected, "it don't take many times of working all night and leaving, wasted in the dawn, only to find the streets full of sunshine and people going to offices before all that's real is the mania of the sound you're making" (1976). Out of this mania a shared vision began slowly to emerge, and the key to this vision was performance. By playing the songs over and over again, the band began to tighten up; once this end was achieved, Cale, in a moment of Zen-like creative provocation, encouraged the musicians to disassemble the songs, extending and improvising just as they had done in their Times Square rehearsals and on stage at CBGBs. The strategy, as Smith explained to Rolling Stone, drove the band to its limits, but, she added, "there's a lotta inspiration going on between the murderer and the victim. And [Cale] had me so nuts I wound up doing this nine-minute cut ["Birdland"] that transcended anything I ever did before" (Marsh, 1976).

Smith's emphasis on a shared feeling of transcendence provides a clue to the underlying meaning of "Horses." . . . "Horses" is concerned with the testing of limits: the boundaries between the sacred and the profane; between male and female; queer and straight; the poetic and the demotic; self and other; the living and the dead. Just as the recording process forced its participants to their limits, so the songs collected on the album push the listener to ques­tion, though not necessarily to overcome, received ideas and attitudes. To listen to "Horses" is thus to hold oneself in suspense; it is to reconsider all that one knows to be rational and real.