In Tennessee and North Carolina, different reactions to an old debate 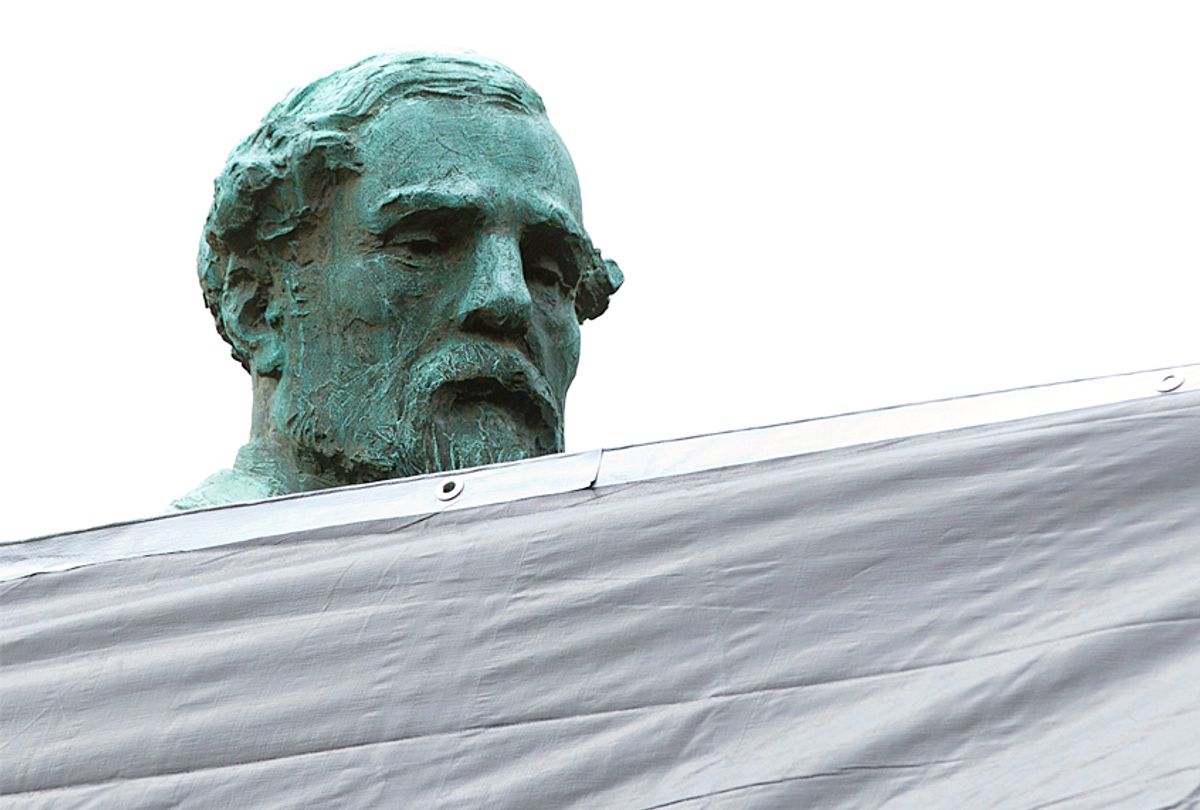 On August 14, Nashville protesters demanded the bust of Confederate general Nathan Bedford Forrest, the first grand wizard of the Ku Klux Klan, be removed from the capitol building. The Tennessee Historical Commission, a state agency charged with historical preservation, denied a request to remove the bust on September 1, in a 7-5 vote.

The August 11 and 12 “Unite the Right” rally in Charlottesville, Virginia has cast a light on what Confederate monuments represent around the country, even in the deep-red South. Tennessee State Representative Craig Fitzhugh, one of two Democratic gubernatorial candidates for Tennessee in 2018, has called for the removal of Forrest’s bust from the state Capitol building.

“The horrific events [in Charlottesville] came as no surprise to African Americans across this country who — 150 years after slavery ended — still contend daily with its legacy of weakness, avarice and evil,” Fitzhugh said in an August statement statement about the Confederate monuments. “I cannot ever truly know what it is to carry the burden of that legacy. I can, however, acknowledge that it exists, check my own privilege, and use whatever platform I have to help plot the way forward.”

A discussion at the Memphis City Council meeting on August 22 focused on finding a resolution for getting rid of of the Nathan Bedford Forrest statue in Health Sciences Park and the statue of Jefferson Davis and related artifacts from Memphis Park Downtown. In 2015, the council voted to remove the Forrest statue, but the Tennessee Historical Commission denied the request.

House Bill 2129 passed with a vote of 71 to 23 in February last year, which requires approval of the Tennessee Historical Commission to alter any historical monument in Tennessee. The bill defines a “memorial” as any public property, park, preserve, reserve, statue, monument, memorial, bust, nameplate, plaque, flag, artwork, historic display, school, street, bridge or building that has been constructed for, named or dedicated on public property in honor of a historical figure or event.

Republican State Representative Steve McDaniel, a civil war re-enactor who introduced HB 2129, has said removing such Confederate monuments ignores a difficult part of United States history and the legacy of a controversial figure like Forrest. Strickland and the Memphis City Council support removing the Confederate monuments, but Tennessee state law requires the Tennessee Historical Commission’s approval before any historical monument can be taken down. The commission has denied a waiver to take them, so Strickland pushed Memphians to “voice their concerns” to the commission and state legislators.

Tennessee Governor Bill Haslam discussed tourism’s economic impact on Tennessee counties in 2016 during a press conference at Clayborn Temple in Memphis on August 22, and after the press conference, Haslam said Strickland had reached out to him several times about removing the city’s Confederate statues. As governor, Haslam has a membership to the Tennessee Historical Commission.

“I have to follow the law like everyone else does,” Haslam said. “I would like it dealt with sooner rather than later for everybody.” Haslam said local governments should be charged with deciding this issue. Haslam also addressed the controversy due to next year’s anniversary of the assassination of Dr. Martin Luther King Jr. in Memphis.

“We put money in our budget for that commemoration of the 50th anniversary of Dr. King’s death,” Haslam said. “And, I think it’d be really appropriate to have these statues gone by then.”

The commission’s next meeting will take place in October, and they will not vote until February. Haslam said he will not tell the commission to meet earlier.

However, in the neighboring state of North Carolina, protesters took matters into their own hands and took down a Confederate statue in Durham, just two days after Tennesseans issued their demand. The statue named the Confederate Soldiers Monument was dedicated to the city in 1924 and stands outside an official government building. The statue is intended to depict a young Confederate soldier, with the words, "In memory of the boys who wore the gray" — the color the Confederate forces wore during the Civil War — engraved below. According to WNCN, Durham's CBS affiliate, a young woman climbed a ladder and wrapped a rope around the middle of the statue, and with sheer force, protestors pulled the statue down. Video footage from the protest shows bystanders taking their turn at kicking the fallen statue and shouting, "We are the revolution," and "No KKK, no fascist USA." Seven protesters were arrested in connection to the events.

In the days following, Governor Roy Cooper called for the removal of more Confederate statues and issued the following statement, "I don't pretend to know what it's like for a person of color to pass by one of these monuments and consider that those memorialized in stone and metal did not value my freedom or humanity," Cooper said in a statement. "Unlike an African-American father, I'll never have to explain to my daughters why there exists an exalted monument for those who wished to keep her and her ancestors in chains."

Under a 2015 implemented North Carolina law, all historical statues or monuments are prohibited from being removed or substantially altered. This includes all statues honoring Confederate soldiers and the Confederacy. However, in the wake of the events in Charlottesville and Durham, Cooper has stated he would like for the 2015 law to be repealed so the monuments can be relocated. Unfortunately, no further action has been taken.

With the recent protests and the removal of certain statues, a nationwide conversation has begun and if moderated well, a just and fair historical outcome can emerge. Unfortunately, the party lines that divide the debate are deep rooted and historical in and of themselves. For many Americans south of the Mason Dixon Line, Confederate statues are a symbol of Southern heritage and a reminder of their ancestors. However, the Confederacy is an intimate symbol of racism and slavery for so many more.

While North Carolina officials have yet to make a decision on the fate of these statutes, local citizens showed solidarity for those arrested in connection to the protests by turning themselves in to police stations throughout Durham. Activist Lamont Lilly spoke to a crowd outside a station and stated, "Very often, it does take one person to be the spark — to be the initiator like sister Bree Newsome. But it takes a movement, it takes a mass of people to support that — and keep those movements sustainable."