"We could all be potential refugees": Ai Weiwei on the epic journey of "Human Flow" 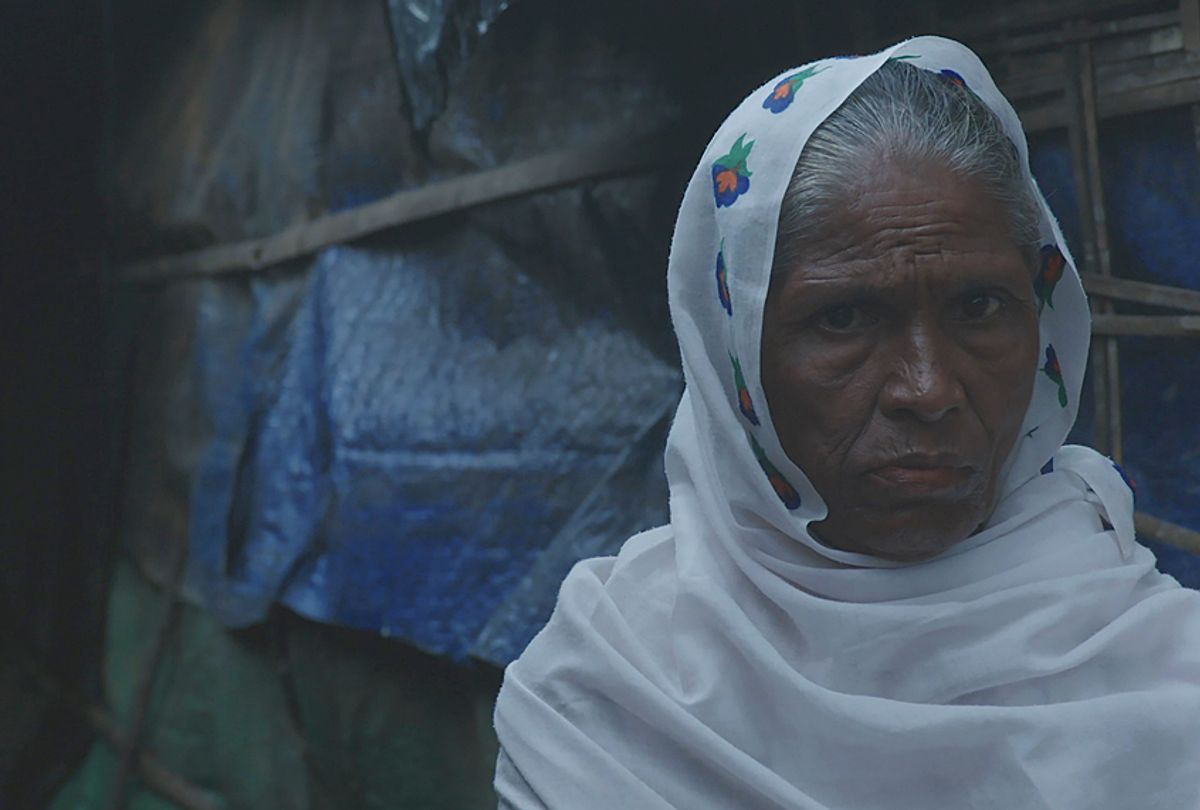 An old woman in Kutupalong-Camp in Ukhia, Bangladesh in "Human Flow" (Amazon Studios)
--

In a statement by Ai Weiwei regarding the selection of his documentary “Human Flow” for the 44th Telluride Film Festival, he wrote, “I grew up living as a refugee within my own country. As a young man, I participated in the first student movements demanding democracy and artistic freedom in China.”

Ai’s statement further explains that he has been an activist for several years. “In 2011, I was arrested and secretly imprisoned for 81 days by the Chinese authorities and falsely accused of crimes. For five years my passport was withheld from me and I was prohibited from leaving China, all the while living under constant government surveillance.”

These facts are not mentioned in “Human Flow,” but the film — an intimate epic — is influenced by them. Ai shot 900 hours of footage and conducted 600 interviews over the course of a year, and edited the film over six months. His lyrical and raw documentary takes a quiet, contemplative approach to the complex topic of people who leave their homeland to escape persecution. As one interviewee eloquently states, “No one leaves their country lightly.”

“Human Flow” is at once observational, impressionistic and immersive. The film features overhead shots that make refugees in a camp seem like ants in a colony, then zooms in to the reality on the ground.

Ai offers portraits of individuals and close-ups of children that illustrate the humanity, shame, dignity and pride as they struggle against the elements and disease. There are long tracking shots of refugees marching down a street, glimpses of detention centers and vivid images of Africans crammed in a too-small boat.

There are two scenes in this sprawling, extraordinary documentary that are especially notable and emotional. One involves Ai exchanging a passport with a refugee named Mahmoud; the other has the filmmaker comforting a woman who is seeking asylum. These, along with many other moments in the film, put a face on those who are often rendered nameless in news coverage.

Ai met with Salon at the Telluride Film Festival to discuss “Human Flow.”

What I most admire about your film is the approach you took to making “Human Flow.” Can you talk about how you designed the film and how it would look or "feel?”

Thank you. It’s not a historical kind of film. It’s really about personal moments. My early experiences were with my father, who was exiled for 20 years because he was a poet. I grew up in a kind of camp. We had to dig a hole in the earth. We stayed in that kind of condition for five years. My father started cleaning the villagers’ toilets. He was seen as someone who doesn’t belong to the society. My classmates would throw stones at my father. That connection maybe gives me a sensitivity about a huge amount of people being pushed away from their homes and having to find a new location. Their journey is about who they are, why they become like this, and is there any possibility for them to survive this?

There is very little knowledge about global politics when you come from a communist society like China, where education and information is limited. But as an artist, I have so much curiosity, and I have long fought with authoritarian societies for freedom of speech, so I wanted to learn more. The film was my journey to visit those places and get the history and literature and poetry, and the statistics from the U.N. and human rights organizations and the news. I read all the news about refugees — that’s how I started.

From the beginning, I sensed this is a topic that is much greater than I am capable of doing as an individual. But I wanted to get involved. I wanted to jump in.

I remember the first time I went to Lesbos [Greece] and we took a boat out and saw a dinghy in the middle of the ocean. We approached it and I asked the captain if I could jump into the boat. Half of the air had disappeared, but he said okay.

I was sitting in the boat, and it was safe, though people had already been rescued, or gone, or disappeared into the ocean. I saw this children’s milk bottle, a Bible, some wallets, right in the middle of the ocean. I got a sense of what it’s like to be someone in this same condition, trying to escape and survive. That moment, I said, I have to set up a camera team in Lesbos and start to record everything. We never saw this as a feature film. We just wanted to record it as evidence.

Yes, evidence. There was an art exhibit you once made that featured refugees’ shoes. It gave you a real sense of the human element.

Once you see them, you are terribly shocked by the situation but also touched, because they are so human. Look at their eyes, how they deal with their children or carry older people on these journeys. It’s epic, and about humanity.

It’s about their dignity.

I could be one of these people. If I had a boy, I’d carry him and jump on a boat and leave everything behind. You want to protect them. But of course, so many people drown in the ocean because there is no safe passage. You see how desperate people are. Those faces were the ones I wanted to talk to and share my feelings with you.

But at the same time, you feel the struggle, and you can’t really help them. Their journey is much longer than you can imagine. It’s a real journey of death. That first generation of people cannot really become a part of society, or a new society. The children, if they are lucky, can get some education, but in most cases and in many locations, you never have a day of school.

They are very brave and capable and determined to establish a new life. They are not interested in somebody giving them mercy or money. They are very proud people with great dignity. They understand life more than most common people. But who is going to have them? Or make it possible for them to restart? That’s a question that’s very hard to answer.

What decisions did you make about where you shot?

We read the news every day. I picked tweets from the news I read [which scroll across the film] that relate to all the issues of the refugees. Every morning, I woke up and followed the news.

You showed the condition of the camps in a granular sense and in great overhead shots, showing us what we generally don’t see in a news report.

We have a very zoom-in lens, and we have iPhone images where we almost touched the subject, but sometimes we needed to pull out to relieve ourselves from this human struggle — to see humans as part of the earth’s movement, or part of nature — to put it into another perspective that overcomes a simple political struggle to see human’s activity. There is the religious argument that human beings, from a certain height, are all the same.

I like the idea one woman says that the people in charge should live in refugee tents. Or when another interviewee says we should send politicians who don’t agree with human rights into space. Your film is political and wants to foment change, but the resources are limited. How do you want people to respond to the film?

I want people to be involved, emotionally and morally. Can we really pretend this is not happening? To be engaged in this situation. Awareness is very important. It is not regional. It is not historical. It will happen again in the future. We could all be potential refugees.

Many people will say politicians have to decide this, but I think, as humans, we decide. We have a responsibility to benefit everybody, and it has to be possible to believe humanity can win. Humans do not rule the universe. We are temporary passengers, and we better have a good self-confidence, but that has to come from an evaluation about ourselves. That’s philosophical, but only humans can do that. No other species can.

If you see the way the refugees dance, and sing, and the way they face problems, you will be ashamed to say, “If I was in the same situation. . . .” Seeing what the children go through is so difficult, but they don’t cry. They hold families [together], big families.

When I saw the Iraqi in the film, without a hand, talking about a lack of medical supplies, it’s heartbreaking.

I was shaking seeing them. Physically, when you see this incomplete human figure, it becomes a metaphor for our humanity — a lost arm, or leg.

A lot of the images show that loss; a backpack floating down stream as dozens of refugees are crossing a river is powerful. You see how hard it is for them and how much they lose. There is powerlessness. But you also have the Princess of Jordan and human rights workers speaking eloquently on the issue.

We met endless human-rights people on the front line. They are so clear and so smart, and they see these issues on a daily bases. Our politicians are so detached, the way they address the problem or understand the situation. I thought everybody has to be involved. The picture is very large. The African population is growing and will become double [by 2050]. Who will solve the problem? It has to be individuals, and you have to believe in that, otherwise, it’s too dark.

You recently generated some controversy in New York with your forthcoming art installation. The Washington Square Association is upset with your plan to have your artwork installed under the arch. Can you talk about that?

We are doing a public art project called “Good Fences Make Good Neighbors.” The title comes from the poet Robert Frost. It’s an ironic sentence. I think it’s about borders and territory. How do we understand our society, and our identity and others? New York is a city of immigrants. The beauty of New York is so mixed.

To have that show in New York for me is very dear and important. I spent 10 years in New York in the 1980s in very, very poor conditions. But I still love the city. The [installation] will be in hundreds of different sites in Brooklyn, Queens, Manhattan, Midtown and the Lower East Side — the immigrant areas — and the Bronx. It reflects the current situation where the President wants to build a wall between Mexico and the U.S. border.

The one piece I want to put is in Washington Square — a place I went every day when I used to make drawings in the West Village. I used to pass through the square. Artists like Duchamp used to spend some time there. A metal cage, kind of like a birdcage, is being fitted to the bottom of the space under the arch. And, of course, the neighborhood association doesn’t like it. They want to put a Christmas tree up — as it’s tradition. But that argument is very, very important. We see the same kind of sentiment in every nation when they refuse to make little change to a tradition. Of course, it has to be respected, but it generates a discussion that is really timely about the issue of fences and borders and territory.