Maybe "Their Satanic Majesties" wasn't the Stones' limp and callow rip-off of "Sgt. Pepper's" after all 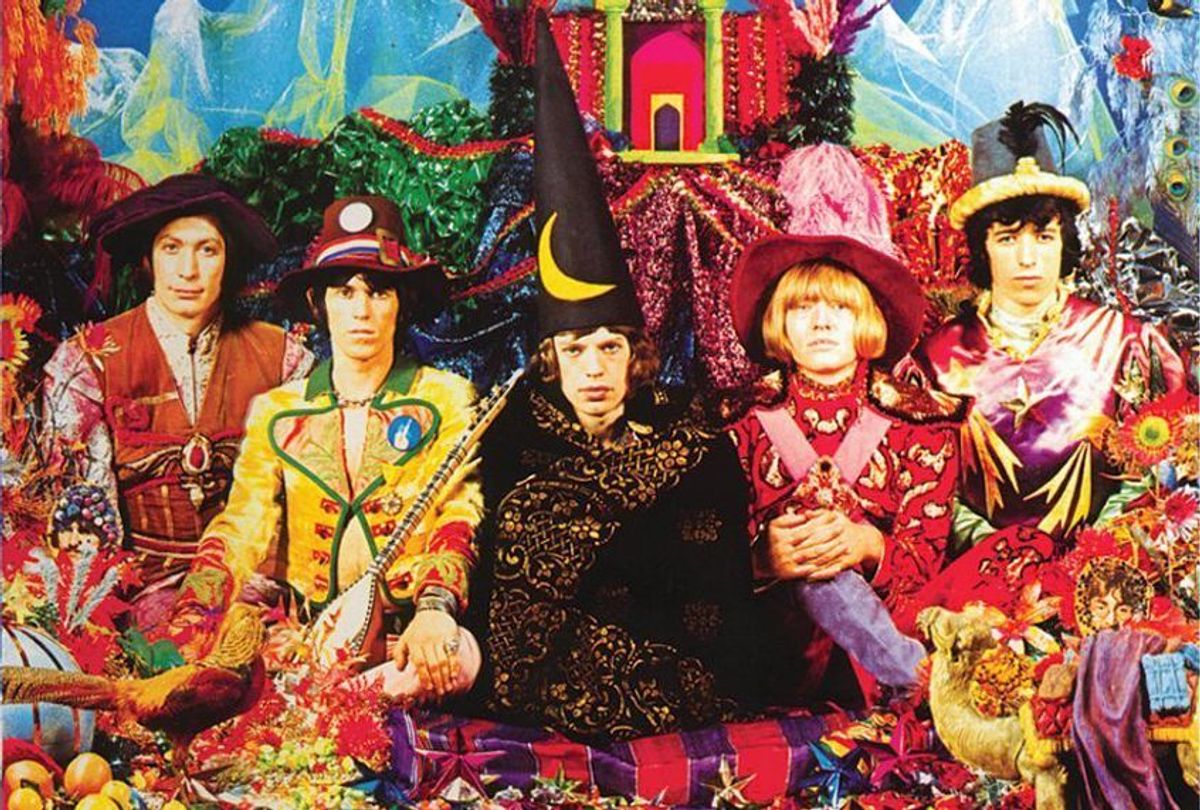 If you were alive in 1967 and old enough to be listening to music, I imagine the last thing you would have expected, after the summer of that year, was for the Rolling Stones to get in on the lovey-dovey act of prevailing good vibes. "Sgt. Pepper's Lonely Hearts Club Band" had happened, Monterey Pop had happened, but the Stones had had a quiet year, as if they were busy formulating a response.

That rejoinder to the zeitgeist came in the form of "Their Satanic Majesties Request," which has just been lavishly reissued by ABKCO in a set that is intended to make you stop and take notice, not of what might have been, but what, perhaps, we’ve been getting wrong for a long time.

Namely, that the almost-always-panned "Satanic Majesties" not only wasn’t that bad, but was about as lovey-dovey as a hug that finished off with the other participant kneeing you in the balls. Let us call it a mixed message, then.

I used to have an editor who loved to say, “this doesn’t track.” He said it about everything in life. The Starbucks could have their holiday cups in in early November, and he’d say, “this doesn’t track.” Sometimes I’d imagine him listening to this Stones LP, then or now. The Stones ought not to track with our sociopolitical times, where everything, it seems, is either bad, or waiting to be labeled as bad. For the Stones could be, to put it simply, quite bad. They were bad within the context of art, which is something rather different than bad. Is "Lolita" bad? It’s not Brock Turner — it’s art. It exists within its own world, to provide insight on our outer one.

But to set the context: the Stones had had a monster year in 1966. We regularly think of that campaign in rock history as the time of the Beatles — who dropped their best album, "Revolver," on the world — and Dylan, who truckled to no contender back then, releasing his own "Blonde on Blonde." The Stones roared and soared in 1965 with “(I Can’t Get No) Satisfaction,” the single that broke them across the globe.

But I don’t know if the Stones were ever better than in 1966, with singles like “19th Nervous Breakdown” and “Have You Seen Your Mother, Baby, Standing in the Shadow?” — the former being a cross of folk-jangle and cosmos-gallivanting energy, the latter a claustrophobic rush of sound to break down the door of the room it was briefly trapped in.

Then there was the "Aftermath" album, full of exotic sounds, with African instruments broadening the rhythm and blues experience, as the Stones dished out some pretty nasty things. “Stupid Girl” and “Under My Thumb” weren’t ever exactly mix tape material for the woman you wished to woo. You hear them now, and you wonder when the Stones backlash is coming. Surely there are SJWs who would like us never to hear this material again?

But that’s the things with songs: they often don’t mean what they say, in the sense that they are not directives, not advisory notes on how to live your life. They’re sonic snapshots of personas. Consider the blues, that genre from which the Stones pulled a lot of their early power: there is more boasting in the blues than in any rap song, and there is also more lamenting than in the lowest circles of Dante’s "Inferno," because life can get like that, can’t it?

Still, you can’t deny that the musical persona version of the Stones churned and burned with a real animus at this stage. Artistically, it was good for them. It certainly didn’t hurt with their arrangements, which were becoming more sophisticated by galaxies than the Bo Diddley pastiches they had traded in, with the band itself being tight enough to rival some of the jazz units that drummer Charlie Watts loved so much.

Were they super aggro at time? Yep. But you were listening in on a world, not looking for a self-help manual on the best way to be a prick at times. In a way, the Stones trafficked in a version of ethical tourism; that is, they let your id up and dance on a wilder side, before you returned back to your world. They helped you exorcise your moral system, your darker moods, your black thoughts, via your stereo.

The knock against "Their Satanic Majesties Request" was that the Stones did not have their heart in anything even remotely hippie-related. Love was not their drug. The Stones and rock’s great year of love did not, you might say, track. This was a pack of Byrons, not lovelorn poets who were even sappier now that Day-Glo sprayed affection was all the rage. Consequently, the songs on "Satanic Majesties" were said to suffer. They noodled, went nowhere, and were imprecise compositionally, emotionally, you name it. Flat.

Listening again to the reissue, I don’t hear that. I hear a tableau, a record that unfurls less as a collection of songs and more like a musical Pangea. Everything is gummed together, the continents have yet to break up, and the Stones are doing that bit where they embrace you, with the dagger clutched over your shoulder. Mind you, they are not plunging it in, but the thought is there, and it is that thought that will flesh itself out into cuts like “Stray Cat Blues” and the utterly brilliant “Sympathy for the Devil” the following year.

The lenticular album cover gave you some idea of what was held inside. Certain things would resemble what was going on at the time in rock music, but the Stones would be taking a sidestep or three in another direction. It’s a music of refractions. “Sing this All Together (See What Happens)” is the communal, “All You Need Is Love” kind of number, a song as tour guide to a happier world, but in that sidestep style it becomes a beckoning to follow these particular pied pipers who you know you probably shouldn’t trust. Instead, you’re just checking out their lair, seeing how they live, incapable of resisting your own curiosity.

The Stones were always great bewitchers. Not a lot of musical acts could put you under a spell as they could, and "Satanic Majesties" is their sustained LP version of this. Even the titles reflect new geography: “In Another Land,” “Citadel.” Who says “citadel?” There’s an old-timey word for you. This is a darkened citadel, so we have need of a song like “The Lantern.” Remember that Zeppelin poster where there’s some wizard dude on this great steep point, and it’s dark and he has a lantern, presumably so he can find his way and you can follow him? That’s "Satanic Majesties" in a single image. But what we also have is a development in songwriting that is going to take the band forward to the artistic riches of "Beggars Banquet" and "Let It Bleed."

“She’s a Rainbow” is the Stones’ most beautiful song, and for artists known for nastiness, it’s interesting how often they could send the bucket down into this particular romantic well and pull up a winner. Their early cover of Arthur Alexander’s “You Better Move On” was flecked with a vulnerability that could even be considered unnerving — for a heart laid bare can do that — and “Ruby Tuesday” is every bit the lovely English pastoral as anything Vaughan Williams ever wrote. “She’s a Rainbow” is downright benevolent.

The Stones were starting to figure out how to meld openness with individuality, songs that were great at processing what was unfolding in a given world — be it the actual world, a romantic one, an emotional one, what have you — while not forfeiting a singular identity and bringing that new knowledge to bear on how to best move forward, even if that meant doing so while out of kilter with the systems of the time. I think that is why outsiders have always flocked to the band, just as you see with the Who. The Stones, though, had the more populist version of that, because their musical approach tended to be universal, whereas the Who had a pronounced English aspect.

We also mustn’t forget that "Satanic Majesties" features one of your half dozen best Stones songs in “2000 Light Years from Home.” Again, the title packs extra meaning, as the Stones are, indeed, rather removed from their home base, at least as far as their discography went up until late 1967.

Has a song ever sounded more empoweringly badass than the opening bars of “2000 Light Years from Home?” You can’t even tell what genre this might be. It’s blues but exotic, it’s proto-metal but Sun Ra-like in its weird rhythms. When the primary beat kicks in and Mick Jagger’s vocals take over, we share a new form of collective musical high.

You are not remotely sure where that is going to take you, on this soupy, strange record. Do you care? I never cared. You venture into the lair of these pied pipers who look suspiciously like highwaymen, and you’re both happy you went in and happy you got out. Then you, and they, go on, your one-off assignation complete.