The president issues a vague threat on conservative radio, but can't do anything about it 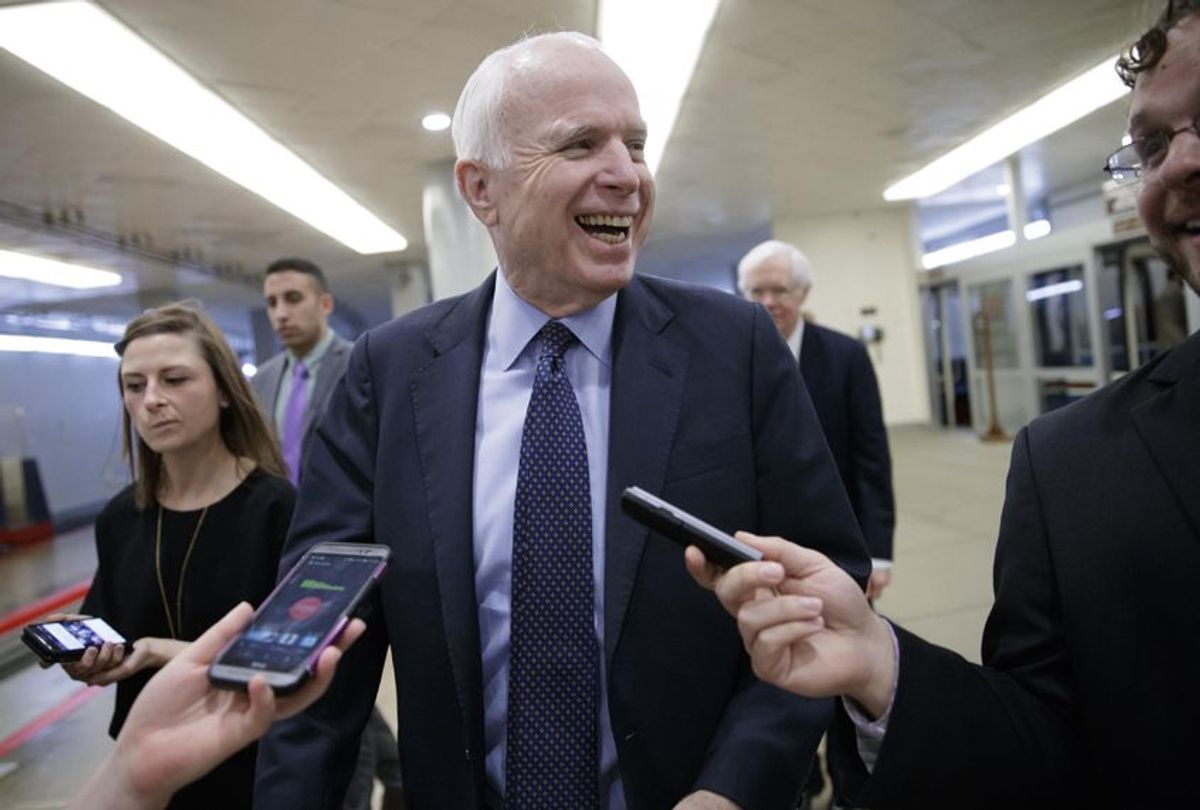 President Donald Trump responded to Sen. John McCain's, R-Ariz., criticism of his base's "half-baked spurious nationalism" by issuing a vague threat that promised vengeance — once again proving that the president is unable to come to terms with any opinions of dissent without responding in a petty and immature fashion.

"I hear everything. People have to be careful because at some point I fight back," Trump said while on his rounds of friendly right-wing radio talk show hosts.

Asked if heard what McCain said yesterday, Trump on WMAL: "I hear everything. People have to be careful because at some point I fight back."

McCain's comments came Monday during an award ceremony, after Trump had falsely claimed that former presidents did not call the families of fallen soldiers. Though he hasn't taken direct shots at the administration, McCain replied sarcastically when he was asked if his comments were a "veiled criticism of Trump."

"Of course not. I would never—no one would ever interpret that as that. How would anyone—HOW WOULD ANYONE?—think that was critical?" McCain said, according to Huffington Post reporter, Matt Fuller.

McCain is asked if his Liberty Medal speech was a "veiled criticism of Trump."

"Of course not. I would never—no one would ever interpret that as that. How would anyone—HOW WOULD ANYONE?—think that was critical?" he said with a wry smile.

Since he was on the campaign trail, Trump has made it clear that he enjoys belittling his political opponents or anyone that may have appeared as an obstacle in his path as opposed to a staunch supporter.

But Trump has also proven to be malleable, and at the same time that he issues grave threats against dissenting opinions, he also pledged to have great working relationships with the very people he has ranted about on Twitter.

Trump has endlessly bashed the Democrats for obstruction but has also demanded that top leaders reach out to him to make deals on health care. To Trump, dealing with the Democrats is contingent on the state of his relationships with Senate Minority Leader Chuck Schumer, D-N.Y., and House Minority Leader Nancy Pelosi, D-Calif., the duo he commonly refers to as "Chuck and Nancy."

At the beginning of his presidency, the relationship was practically nonexistent, likely because Trump believed he could, with forceful rhetoric, control Republican-led Congress. But months of legislative failure have made Trump desperate for success in any form.

The president has seemed to view both Congressional Republicans and Democrats as contractors for his personal use, rather than other actors in the game of politics. Trump wants to make sure the Republicans know that if they make life difficult for him, he will work behind their backs with the Democrats to achieve, at least some variation, of what he wants. Trump attempted this with the Obama-era immigration law, DACA, and on the debt ceiling.

Trump has also engaged in ongoing feuds with Senate Majority Leader Mitch McConnell, R-Ky., but he reaffirmed their unity during a strange press conference on Monday. Even though Trump has repeatedly demanded actions from McConnell and placed much of the blame of the failure to repeal and replace Obamacare on him, the president is still in need of legislative accomplishments, so he likely sees more opportunity in McConnell, than admirable character flaws.

As long as Trump's peers deliver unconditional praise and support for all of his actions, they will have his support. However, any slight deviation from the Trump administration's narrative, or criticism of their tactics — no matter how loyal one has been in the past — will be met with petty vengeance, likely in the form of at least 140 characters in early morning tweets. Just ask Bob Corker.