Samantha Bee hawks the most terrifying Halloween costume of all: Pro-gun congressman 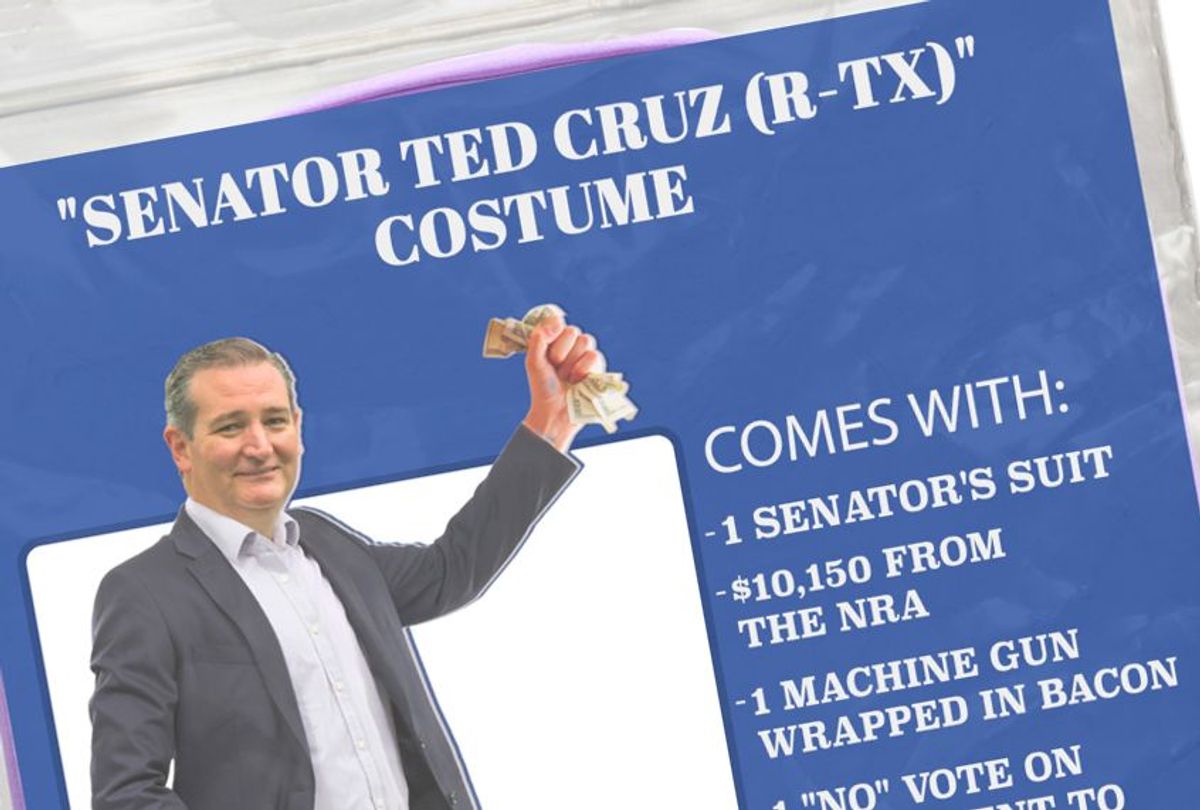 Samantha Bee has a Halloween costume suggestion that may indeed win you a costume contest (or at least terrify those around you). The "Full Frontal" host is asking you and anyone who cares about gun control to dress up as a U.S. Senator beholden to the National Rifle Association. Horrifying.

In a statement posted to her show's Medium page, Bee announced that Americans can dress up as eight senators backed by the NRA. "Senators who will continue to allow the senseless killing of Americans because they’re beholden to the NRA? We can’t think of anything scarier!" the post said. Indeed, we cannot either.

Alas, the costumes are limited to eight senators up for re-election in 2018, so not every senator bought by the NRA can be lampooned or used to terrorize neighborhood children. Just think of the wasted potential.

"The #BoughtNRASenator costume collection is currently limited to senators up for re-election in 2018, but they’re certainly not the only 8 bought by the NRA," the statement said.

Now, these frightening costumes are not actually for sale to the public (it's a simple web campaign). Nonetheless, we're shivering. Bee's stunt, on top of being chilling, promotes Everytown, an organization that works to "end gun violence and build safer communities." The group claims to have three million members, including mayors, moms, police officers, teachers, survivors and gun owners.

The costumes themselves are, of course, bloodcurdling. Sen. Dean Heller's comes with "1 senator's suit, $9,900 from the NRA, 1 'no' vote on banning high-capacity magazines over 10 bullets, 1 're-elect Dean Heller 2018' sign." The costume of Ted Cruz is a costume of Ted Cruz — a dark vision of terror that requires no embellishment and is perhaps too frightening to wear.

Last year, Bee used her "Full Frontal" platform to launch what has become an all-out war on the NRA.

Democratic Sen. Chris Murphy led a 15-hour filibuster effort to push the Senate for gun control measures, including one focused on preventing anyone on the terrorist watchlist from buying a gun, and another aimed to expand background checks to incorporate firearm purchases made online or at gun shows, but these failed to pass.

Subsequently, Bee dedicated a seething monologue to the cowardice of Senate Republicans.

"If you’re wondering how those amendments are even controversial when 90 pecent of Americans, including gun owners, want universal background checks, and zero percent of Americans want terrorists to have guns, then you must have been living under a rock," Bee declared. "Which is fine: that’s a good place to hide from an active shooter. Stay there."