Trump’s Benghazi gets worse: His Obama obsession magnifies his disrespect

Pressed about his silence on Niger, Trump lied about his predecessor, again – this time he got fact-checked 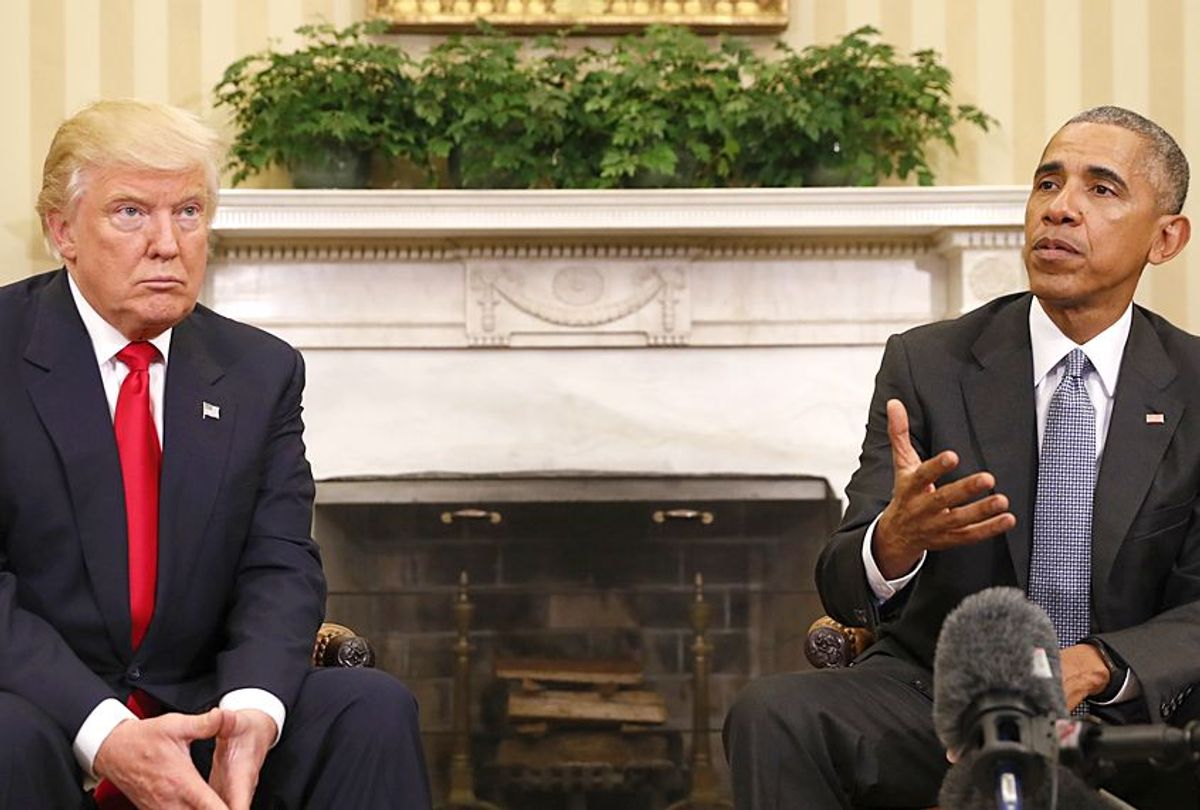 Nearly two weeks after an attack on U.S. troops in the West African nation of Niger, President Donald Trump was forced to admit on Monday that he had still not spoken to the families of the soldiers killed in action.

When the final coffin carrying a Green Beret soldier killed after his unit was ambushed earlier this month -- one of the four who died in Niger -- arrived at Dover Air Force Base, Trump was not there. Nor did he bother to call the soldier's grieving family. He was playing golf, at a golf course he owns.

There have been 11 American combat fatalities in Afghanistan and 14 in Iraq so far this year, after more than a decade of combat in both countries. But while the Trump administration, and its aides in right-wing media, have pushed a narrative touting a successful war against ISIS, an outgrowth of the terrorist network attacked the Third Special Forces Group and more than 40 Nigerien soldiers on Oct. 4, near the country’s southwestern border with Mali.

The Trump administration's notable silence after the Oct. 4 ambush has drawn increasing scrutiny. During an impromptu press conference on Monday, the president was finally pressed on his apparent neglect.

The unscheduled press conference in the Rose Garden was the first time the White House has publicly addressed the four Green Berets killed in Niger — 12 days after it happened. In that time, Trump has hit the golf links seven times.

Offering what appeared to be an uncharacteristic awareness of shame and guilt, Trump retreated into his defensive default mode before ultimately backing down a bit. He said he would “at some point during the period of time call the parents.” In explaining the delay, he said, “Now it gets to a point where you know, you make four of five of them in one day, it’s a very, very tough day. For me, that’s by far the toughest.”

When pressed about why he had not spoken out earlier, Trump attempted to shift the blame, as usual, to the president before him. Specifically singling out Barack Obama, Trump falsely claimed that previous presidents hadn’t even bothered to call the families of fallen soldiers.

Multiple former staffers for both Obama and George W. Bush quickly rushed to social media to reject this outrageous falsehood.

The President and First Lady console Paul and Janet, parents of Army Sgt. 1st Class Jared C. Monti, who had just been awarded posthumously with the Medal of Honor for his actions in Afghanistan. This was the first of 52 Medals of Honor, the nation’s highest award for military valor, that President Obama bestowed during his two terms. I also photographed him meeting with hundreds of wounded soldiers, and family members of those killed in action.

The president was also challenged to defend his claim by NBC reporter Peter Alexander.

"Earlier you claimed President Obama never called the families of fallen soldiers," Alexander said. "How can you make that claim?"

Without an apology or admitting a mistake, Trump actually appeared to back down.

“I don’t know if he did. No, no, no,” Trump stammered. “I was told that he didn’t often and a lot of presidents don’t, they write letters.”

He continued to flop around in the mess of his own creation.

This was an exceedingly rare example of Trump being pressed on one of his lies in real time and forced to back down.

While there is no long-held White House tradition for contacting the families of fallen service members, recent presidents have made many such phone calls and also sent letters to the families of those killed while deployed. Both Obama and Bush have described how difficult those calls were to make.

Bush reportedly met privately with more than 500 families of troops killed in action towards the end of this presidency. Obama, meanwhile, made a late-night visit to Dover Air Force base during his first year in office to receive the bodies of fallen soldiers. His White House frequently hosted Gold Star families during the holidays.

Trump merely claimed he had written “personal letters” to the families of the soldiers over the weekend, which would be mailed later on Monday or Tuesday. White House press secretary Sarah Huckabee Sanders said last week that any suggestion that the administration wasn't taking the deaths of the soldiers seriously was false. On Monday, she followed up the president’s flippant falsehoods with a statement claiming that Trump was simply “stating a fact.”

The president frequently manages to say something so inflammatory that it serves as an effective deflection, often obstructing the original subject of criticism. His first public comments on the Niger ambush did little to clarify what happened or why U.S. soldiers were in that country to begin with, despite the fact that no military action there has been authorized by Congress as required by the Constitution. He didn’t answer when asked when he might make the calls to the grieving families.

Exactly which generals are we meant to believe told him that his predecessors couldn’t be bothered to reach out to Gold Star families?

Of course, Trump won’t have to answer such tough questions anytime soon. But the lesson that should be apparent from his bizarre response to criticism is that his lies don't hold up under face-to-face criticism. Reporters have a responsibility to use every follow-up question as an opportunity to create the real-time fact-checking that’s been missing as this president has blazed new frontiers in political mendacity.