On the eve of Richard Spencer's rally, see when 20,000 Nazis took over Madison Square Garden

A slice of history, doomed to repeat itself 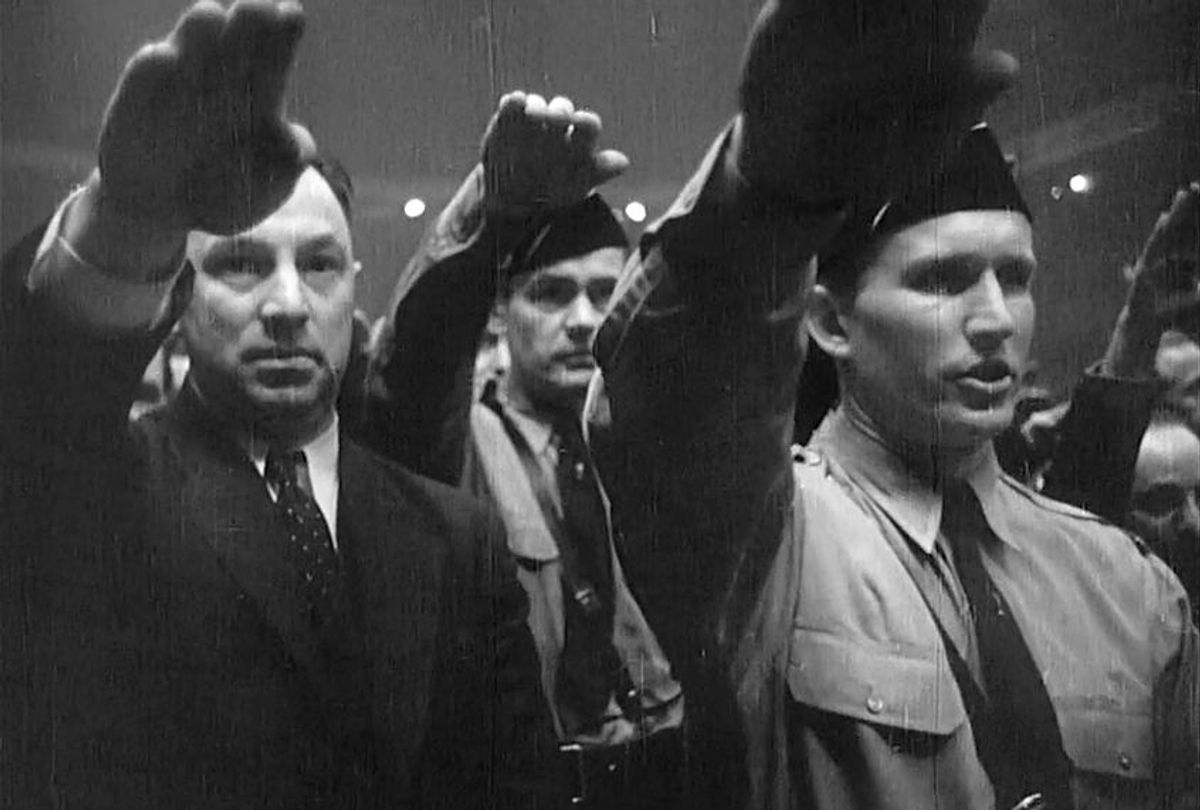 Charlottesville wasn’t the beginning of white supremacist demonstrations in the United States. It certainly won’t be the end, either. Just look to Nazi sympathizer Richard Spencer’s upcoming rally in Florida.

But today we had a stark reminder that someone once stood on center stage at New York City's Madison Square Garden and tried to sell the notion that Nazism was as American as apple pie, as 20,000 applauded.

Wednesday, Gothamist published a stirring interview with filmmaker Marshall Curry, who just last week released a chilling short called "A Night at the Garden" in collaboration with the documentary project, Field of Vision. In it, Curry talks about his compilation of rarely seen or unused footage from the 1939 “Pro American Rally,” held by the American Nazi group called the German American Bund at Madison Square Garden. Between the 20,000 who attended inside and the protestors against it outside, the rally sparked the biggest police mobilization for a single local event in the city’s history.

“It tells a story about our country that we'd prefer to forget. We'd like to think that when Nazism rose up, all Americans were instantly appalled,” Curry told Gothamist. “But while the vast majority of Americans were appalled by the Nazis, there was also a significant group of Americans who were sympathetic to their white supremacist, anti-Semitic message."

In the video, Americans offer the Nazi salute to the American flag, rush a Jewish activist who crashed the stage, and yield to a charismatic leader belittling a press that he claims is “Jewish controlled.”

“Ladies and Gentlemen, fellow Americans and American patriots. I’m sure I do not come before you tonight as a complete stranger," says Bund leader Fritz Julius Kuhn. "You all have heard of me through the Jewish controlled press as a creature with horns, a cloven hoof and a long tail.”

“We, with American ideals demand that our government shall be returned to the American people who founded it. If you ask what we are actively fighting for under our charter: First, a socially just, Gentile ruled United States. Second, Gentile-controlled labor unions, free from Jewish Moscow-directed domination,” he continued.

You'd be forgiven if you thought the above sounded almost like a 2016 campaign address.

“The footage is so powerful, it seems amazing that it isn't a stock part of every high school history class. But I think the rally has slipped out of our collective memory in part because it's scary and embarrassing,” said Curry. “When you see 20,000 Americans gathering in Madison Square Garden, you can be sure that many times that were passively supportive.”

Most telling is when Curry reminds us that “These were ideas that, if not universally accepted, were at least considered legitimate points of view. But two years after this rally, Japan attacked Pearl Harbor and Germany declared war on the U.S. And at that point this sort of philosophy became unacceptable,” he said

“When the Nazis began killing American soldiers, we started erasing the fact that any Americans had ever shared their philosophy.” So perhaps it wasn’t a humanitarian crisis and the deaths of a million innocent Jewish people that the United States was fighting for, but the death of American soldiers. And truly chilling, is the fact that these were everyday people, Americans we live alongside — just like those who held Tiki Torches in Charlottesville, just like those who may greet Spencer in Florida.

“We'd like to believe that there are sharp lines between good people and bad people,” said Curry. “But I think most humans have dark passions inside us, waiting to be stirred up by a demagogue who is funny and mean, who can convince us that decency is for the weak, that democracy is naïve, and that kindness and respect for others are just ridiculous political correctness.”

Unlike Charlottesville, which was touted by Trump as having “fine people” on both sides, leadership in New York was quick to separate themselves from ideals of the Nazis. Mayor Fiorello La Guardia called the rally an “exhibition of international cooties,” calling out the attendees for the germs they were.

The German American Bund, or "the Bund," was a collaboration of sorts between two pre-existing, native-born German-American organizations and Adolf Hitler's Nazi government. Founded in 1933 as Nazi Germany was ascendant on the international stage, the group was primarily made up of German immigrants and their children and espoused a message that was simultaneously nationalistic toward German and American interests.

Pro-Nazi without apology, the distinctly racist Bund flourished for a short period that decade, eventually surpassing 25,000 before a series of investigations and turn in public sentiment against Germany and Nazism led to its dissolution in 1941. The U.S. government would imprison its leader, the German-born Kuhn, for embezzlement and later revoke his American citizenship, ultimately deporting him back to his home country in 1945. He died six years later, poor and forgotten.

Back in 1933, The New York Times, the American Jewish Committee spoke against the Bund's Garden rally, noting that while they saw it as "completely anti-American and anti-Democratic . . . we believe that the basic rights of free speech and free assembly must never be tampered with in the United States, we are opposed to any action to prevent the Bund from airing its views."

Florida Governor Rick Scott echoed that sentiment as he announced he was preparing for Spencer's upcoming rally by declaring a state of emergency. "We live in a country where everyone has the right to voice their opinion. However, we have zero tolerance for violence and public safety is always our number one priority," Scott said.

The best course of action as these echoes continue is to document new atrocities and remember past ones. Forgetting this brought us where we are today.

Watch "A Night at the Garden" below.