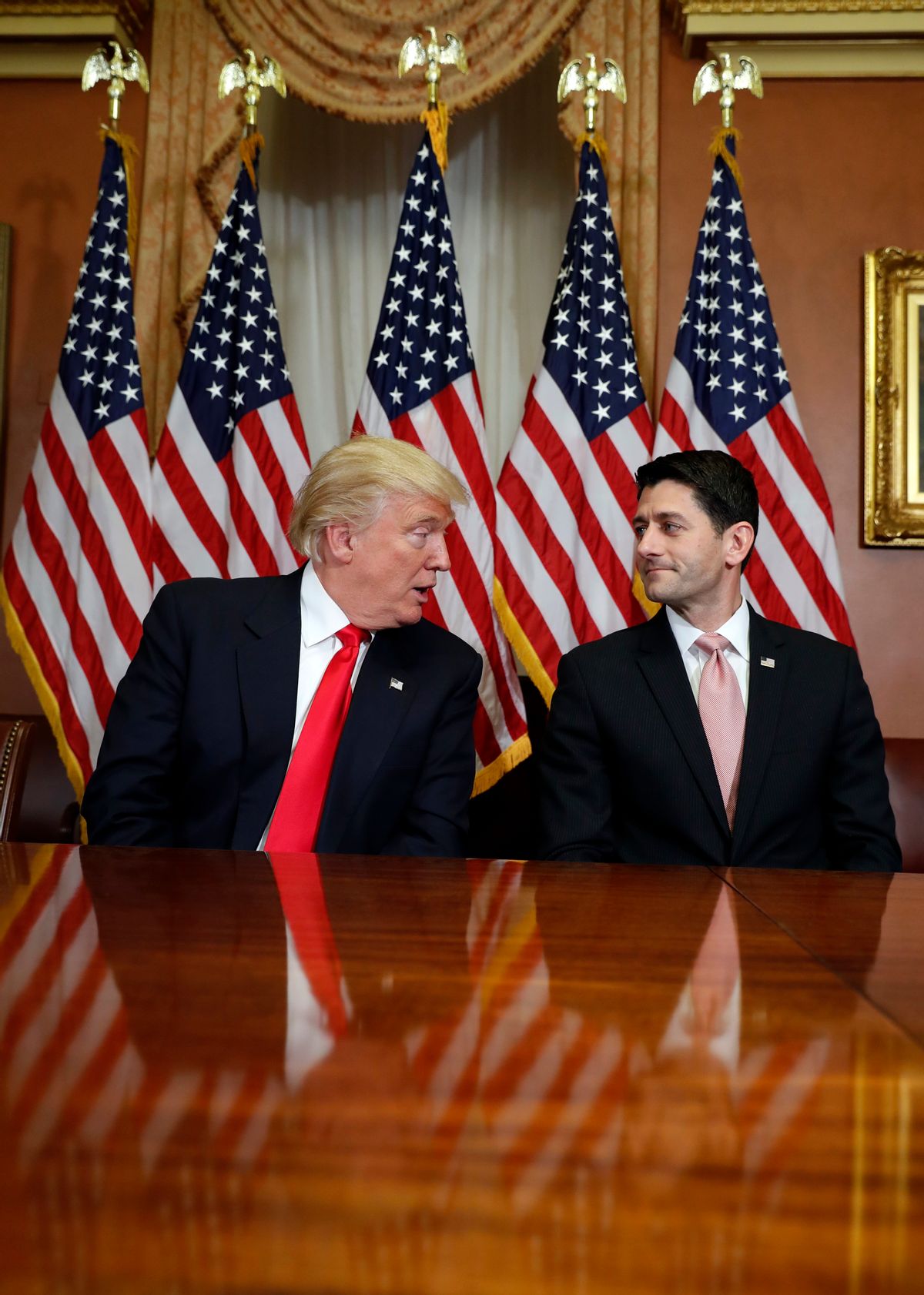 President Donald Trump pledged to drain the swamp when he took over the White House and vowed to end Washington's addiction to corporate money and influence.

During his acceptance speech at the Republican National Convention in 2016, Trump said he would not be "able to look the other way" when the nation's political system "has sold out to some corporate lobbyist for cash."

But records obtained by the Center for Public Integrity show that a myriad of corporations and trade groups secretly "bankrolled a plush hideaway for lawmakers at the same Republican National Convention in Cleveland."

The "cloakroom" was a lavish, "exclusive office, lounge and gathering space for Republican lawmakers — including House Speaker Paul Ryan."

The "cloakroom" was built on the practice court inside Quicken Loans Arena, according to CPI.

"The immediate effect is it looks like it hid certain donors to the convention," Lawrence Noble, senior director and general counsel for the Campaign Legal Center, a nonpartisan nonprofit that advocates for campaign finance reform, told CPI.

A limited liability company called "Friends of the House 2016 LLC" paid for the secret room which afforded its contributors with entry space.

The purpose of the payments and what contributors expected to receive in return is still currently unclear, but Jeffrey Livingston is listed as the company's registered agent. A court filing by Livingston's lawyer showed that the LLC was "established to manage and raise funds for hospitality activities and events during the 2016 Republican National Convention."

Master Plan Design and Joe Mineo Creative were credited as the contractors for the room on a marketing booklet, CPI reported. They said that "Ryan’s representatives helped design the space and supervise construction," however Ryan's office disputed that claim.

Kevin Seifert, a spokesman for Paul Ryan's congressional campaign committee, told CPI that Ryan nor his office were "involved in supervising construction or consulted about the design of the cloakroom."

Facing pressure from activists, corporations were skeptical about openly sponsoring the convention, but discreetly funding Friends of the House 2016 LLC gave them the opportunity they were looking for, with no public backlash.

But national political conventions are legendary opportunities for access to lawmakers, despite ethics reforms Congress passed in the wake of influence peddling scandals. Complex rules govern even the details of events, such as food menus, but often turn on technical points, forcing lawyers to double-check legal advice every four years.

For example, although individual congressional members can’t be honored by special interests, certain delegations of lawmakers can be — and frequently are. The rules for U.S. House members and U.S. senators aren’t identical. And companies have many routes to court those in power, like sponsoring delegations or events that raise money for charity.

Microsoft donated $1.8 million in software to the Cleveland Host Committee, without records of a cash donation.

"We decided last fall to provide a variety of Microsoft technology products and services instead of making a cash donation," Fred Humphries, corporate vice president of U.S. government affairs for Microsoft, wrote in an April 2016 email.

"The convention is one big loophole to the limits of corrupting money on politics," Paul S. Ryan (who is unrelated to Speaker Ryan), vice president for policy and litigation at Common Cause, a nonpartisan nonprofit that advocates for limits on money in politics, told CPI.

Comcast donated $200,000 to the LLC company, but isn't listed as a donor by the Cleveland 2016 Host Committee.

"Koch Companies Public Sector, which wrote a $100,000 check to Friends of the House 2016 LLC, [is not listed as a donor]. In fact, a Koch Industries spokesman in June said the billionaire brothers Charles and David Koch, well-known Republican megadonors, weren’t planning to contribute to the convention at all."