Trump's sabotage politics: Break things, then take the credit when others fix them

Trump doesn't have a strategy, on health care or anything else. He lurches from one hostage scenario to the next 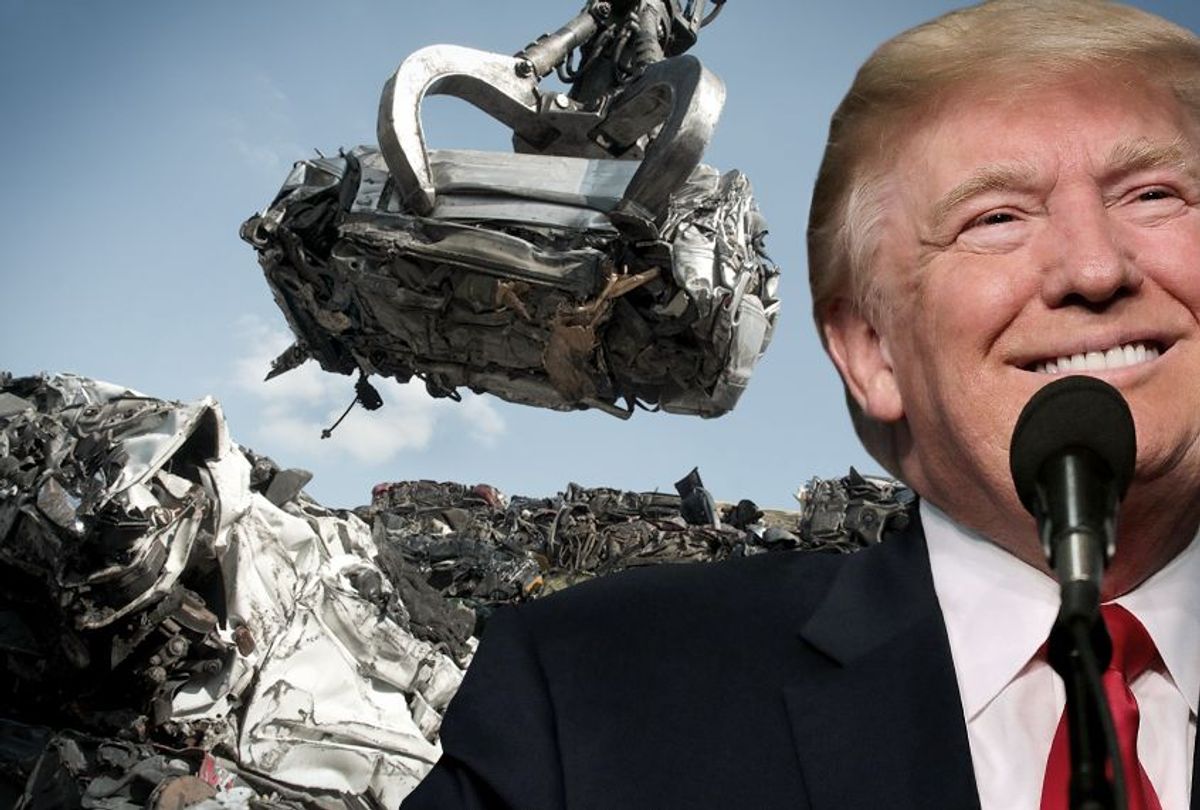 As I have noted in many Salon columns over the past year, Donald Trump has been saying from the beginning of his term that he believed the best political move he could make with respect to health care would be to sabotage it and blame the Democrats. On Jan. 11, while Barack Obama was still president, Trump held a press conference and said:

The Republicans in Congress talked him out of that approach, because they understood that they would own whatever happens with health care. They now have total control of the government (at least in theory) and are expected to fix problems in the American health care system. Three days after he made that comment, Trump told The Washington Post he had a plan that just needed some final tweaking:

We're going to have insurance for everyone. There was a philosophy in some circles that if you can't pay for it you don't get it. That's not going to happen with us. It's very much formulated down to the final strokes. We haven't put it in quite yet but we're going to be doing it soon.

He lied, obviously. He had no plan. What he may not have realized was that Republicans in Congress didn't have one that he could take credit for either. They spent the best part of a year trying to cobble together something they could describe as "repeal and replace," tuck some fat tax cuts inside it and call it a day. They tried and, as we know, they failed. Trump has been flailing around ever since, trying to evade responsibility, desperate to spin this abject defeat as a win.

At one point he simply denied that it had happened that way, weirdly claiming that the Senate had the win in the bag but a senator was in the hospital. He may have been conflating John McCain's absences for cancer treatment with the fact that McCain dramatically voted no on the "skinny repeal" bill, but in any case, it was delusional. There was no senator in the hospital and Republicans simply did not have the votes.

As it happens, through negotiations in the Senate over the course of several months, Sen. Lamar Alexander, R-Tenn., and Sen. Patty Murray, D-Wash., had worked on a bipartisan deal to shore up the Affordable Care Act, which did have some issues that needed to be addressed. They were reportedly making serious progress after the first vote failed in the Senate, until Sen. Lindsey Graham, R-S.C., decided to stage a final push for "repeal and replace." Trump and Majority Leader Mitch McConnell told Alexander to stand down.

That didn't work either and, sullen over his bad press, Trump decided last week to go back to his own favored plan. That was when he pulled the plug on the Cost Sharing Reductions (CSRs), the government's payments to health insurers that help millions of lower-income Americans afford coverage. Combined with other administration policies, such as reducing the funding used to promote the sign-up period and pay the workers who guide customers through the process, it amounts to the kind of sabotage that Trump suggested back in January.

On Tuesday, however, Trump abruptly announced that Alexander and Murray had come up with what he called a "short-term fix," sounding as though he were going to back it. Despite the fact that the two senators had been working on this for months, Trump tried to take credit by claiming that his hardball tactics with the CSRs had forced them to come together and hammer out a deal.

At this point, nobody knows if anything will actually come of this. The House didn't seem to know anything about the Alexander-Murray plan, which is kind of a problem. Trump himself seemed to backtrack, tweeting later in the day, “any increase in ObamaCare premiums is the fault of the Democrats for giving us a ‘product’ that never had a chance of working” and then, in a speech before the Heritage Foundation on Tuesday night, saying, "I continue to believe Congress must find a solution to the Obamacare mess instead of providing bailouts to insurance companies." So who knows what he's really doing?

Ronald Brownstein offered an interesting observation at CNN.com on Tuesday about Trump's negotiating technique, which might explain what he's going for, even if he's doing it badly:

As a candidate, Donald Trump sold himself as a deal maker. As president, he's governing more as a hostage taker. Across an array of domestic and foreign challenges, Trump's go-to move has become to create what amounts to a political hostage situation. He's either terminating, or threatening to terminate, a series of domestic and international policies adopted by earlier administrations -- and insisting that others grant him concessions to change his mind.

Brownstein cites the health care gambit but also talks about how Trump is attempting similar maneuvers with his threats to withdraw from NAFTA, rescinding the DACA executive order and a full array of dangerous foreign policy provocations. Essentially, he's creating crises for others to fix so that he can take the credit -- or blame the other parties for failing to meet his demands.

The problem is that it never really works. He seems to believe that threatening to kill the hostages gives him leverage. It doesn't. As Brownstein notes, it more often leaves him stumbling around, isolated, with his opposition hardened and his allies divided and forming new relationships against him. It's a doomed strategy.

He's basically holding himself hostage and telling the world, "Give me what I want or the president gets it." It's tempting, right? The problem is that if he follows through on his threat he's going to take a lot of people with him.