So much for Kelly the responsible grownup. Former general disgraces himself backing up his inexcusable boss 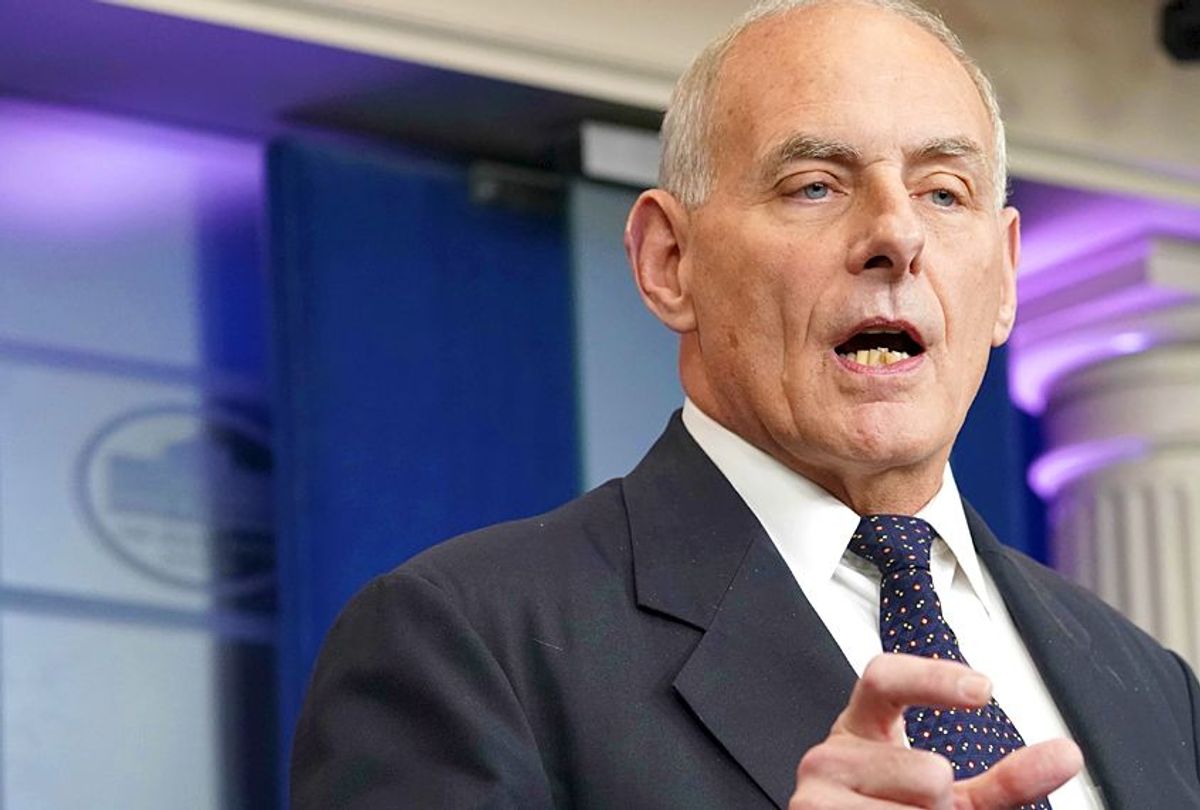 Ever since Donald Trump was asked about his curious delay in commenting on the deaths of four servicemen in Niger and, instead of answering, began to brag about how he was the only president to call all the families of fallen soldiers, this ugly story has been festering. Once again, Trump's reflexive self-aggrandizement to cover up for his failures has gotten him into trouble.

First of all, other presidents have of course called families of the fallen and have made many other gestures of sympathy and care. It was a low blow to try to tar his predecessors as failing to honor the war dead. Needless to say, the moment he made the claim that he alone called all the families, reporters went out and started asking and it turned out he hadn't done that either.

After making that ignoble boast, Trump went on a radio show and said that someone should ask John Kelly, the former Marine general who is now his chief of staff, whether President Obama had called him after his son was killed in Afghanistan, which obviously meant that was where he'd heard that Obama fell down on the job. The White House later confirmed this.

Evidently, this spurred Trump to finally call Myeshia Johnson, the widow of Sgt. La David Johnson, one of the soldiers killed in Niger, while she was on the way to meet the coffin at the airport. He behaved like a boor because he doesn't know how to act any other way. Rep. Frederica Wilson, D-Fla., who was accompanying the family to carry out this terrible duty, complained publicly about Trump's insensitive comments which the fallen soldier's mother confirmed. Instead of taking the mature and dignified course and simply apologizing for being inartful with his words, President Trump called everyone a liar and sent out one of "his generals" to clean up his mess.

Kelly has a distinguished record in the Marine Corps and is himself a Gold Star father who lost a son in Afghanistan. I don't think anyone in the country disrespects either of those things. But he is no longer in uniform and has willingly become a partisan political player working for a contemptible leader. When he decided to use his stature and experience to bail out his boss for making a hash of what he calls a sacred issue on Thursday, he sold his own reputation cheaply.

He went before the press and confirmed that Obama hadn't called him, but said he didn't see this as a negative thing. He wondered how any president can properly express himself if he's never been through the ordeal of losing a child, trying to elicit sympathy for poor Donald Trump and the burden he bears. But most presidents read a book or two about former administrations, they reach out to the living ex-presidents for insight or they just generally give a damn about aspects of the job other than holding rallies and watching "Fox & Friends." But this is Trump: He doesn't read and he doesn't ask for or take advice. He's not like any other president in our history.

After delivering what seemed to be a sincere disquisition on the way members of the military and their families face this tragedy, Kelly abruptly went on the attack, accusing everyone but his boss of lowering the discourse and destroying everything that's traditionally sacred in our society.

Kelly said that women were formerly considered sacred and implied that Khizr and Ghazala Khan and his wife had degraded the sacredness of the Gold Star family by appearing at the Democratic convention, conveniently ignoring the fact that the man he's working for is an admitted sexual predator who mercilessly attacked that Gold Star family. (He didn't mention that POWs used to be held sacred as well, or that his boss says he "prefers people who aren't captured.")  He angrily decried the politicization of the war dead, although it was his own boss who politicized a simple question about a military mission that nobody wants to talk about by attacking his predecessors' approach to dealing with this sacred duty.

Then Kelly went for the jugular and brutally attacked Rep. Wilson for "eavesdropping" on the conversation between the president and Sgt. Johnson's wife. Apparently he hadn't bothered to read anything about the incident or he would have known that the call was on a speakerphone in the car and the exchange was confirmed by others who heard it. Had he looked into it, he would also have found out that Wilson, a former educator, is a good friend of the family and ran a program Johnson attended called the 5,000 Role Models of Excellence Project, for youths pursuing military careers.

Not that any of that matters. It was apparently decided in the White House ahead of time that the best way to protect the boss was to smear Rep. Wilson. Kelly carried out the order with relish, even though its premise was a lie.

Just like his boss, the president, Kelly never once uttered the name of Sgt. La David Johnson or his pregnant widow, Myeshia.

Much of the mainstream press was predictably breathless over Kelly's forceful performance. Interestingly, many of the military commentators were not as impressed, correctly observing that it was Trump and Kelly who were politicizing the fallen. And the president just kept going:

Chuck Todd said on "Meet the Press Daily" that people heard what they wanted to hear from the reports of Trump's calls, suggesting that if you liked Trump you understood his reported comment, "He knew what he signed up for," as a sign of empathy and caring. I have no doubt that's true. His fans always give him the benefit of the doubt. For the rest of us it's not that simple, since Trump is a compulsive liar who has never shown empathy toward anyone but himself. As George W. Bush famously said, "Fool me once, shame on you. Fool me ... won't get fooled again."