Tucker Carlson: Trump can't be racist toward Puerto Ricans because they're white 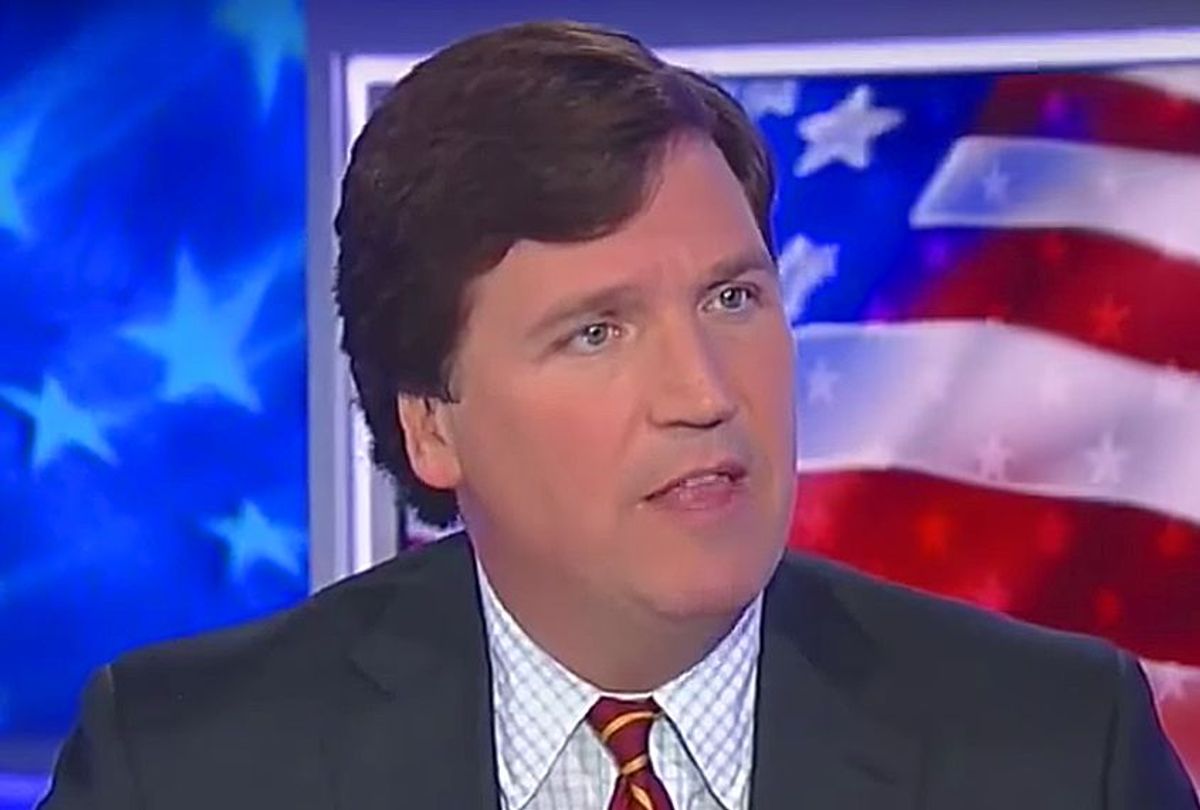 It's been a month since Hurricane Maria barreled into Puerto Rico and left the island in desperate need of assistance. The federal government's slow response, and President Donald Trump's provocations — such as blaming the island for impacting the nation's budget — has left many wondering why the U.S. would neglect some of its own citizens.

But Thursday night Fox News host Tucker Carlson didn't seem to take issue with reports that the government had failed to adequately respond to the damage left in the wake of the hurricane. No, he was concerned about people calling the president's various actions (and inactions) racist.

"God there are a lot of dumb people on TV," Carlson accidentally ironically said after showing clips of politicians and pundits alike questioning racial motives as to why the Trump administration had neglected Puerto Ricans.

"Is Trump actually bungling a hurricane response just because he's a racist cartoon?" Carlson asked, before he introduced his guest, Evangeline Gomez, who was described as an attorney and Democratic commentator.

"I just don't understand the evidence for racism in this," Carlson said.

"Well to the people who make that argument, they've seen his [Trump's] tweets, the tweets basically implying that Puerto Ricans were lazy, they weren't helping one another, they were depending on the federal government to help them when they could have done these things themselves, which was impossible," Gomez explained.

"As a factual matter, Puerto Rico is 75 percent white, according to the U.S. Census," Carlson pointed out. "I'm not sure how that's racist. I mean, maybe he doesn't like Puerto Ricans or maybe he did a bad job, that's all fair, but racist?"

Carlson's numbers are correct in the sense that he collected them from the U.S. Census. It's a curious thing that, yes, the majority of respondents to the census in Puerto Rico did indeed identify that way. However, focusing on that particular finding disregards the fact that Puerto Ricans' are, by and large, proud of their own Hispanic-influenced heritage, one that they make sure stands in positive distinction from white-directed culture and other cultures of the mainland U.S.

As well, the entirety of the island's population is historically of Hispanic origin, according to the Pew Research Center. Perhaps most importantly, the majority of mainland Americans perceive Puerto Ricans to be Hispanic no matter what they mark on a census form. Just ask most Puerto Ricans, the hatred some in his country have for Mexicans and South Americans often bleeds over onto them.

"The race angle bothers me because it's unfounded, it makes people hate each other." Carlson said out of either a lack of comprehension or willful disingenuousness. "It's just stupid."

In a segment from the same night, Carlson turned his attention to the timeline of what exactly occurred when Stephen Paddock opened fire on concertgoers in Las Vegas and killed 58 people and injured hundreds more.

Carlson cited a report from the Daily Mail which called the timeline into question and suggested the Mandalay Bay security guard, who reportedly alerted police about Paddock, would not appear on TV out of MGM's fear that he would not being able to stick to his story when faced hard-hitting interview questions.

Carlson called the security guard's actions into question, asking why he should be considered a hero.