Harvey Weinstein and the masculine code: Why men are being so quiet

I get it, guys: You're not like that. You're not sure what to say. But our silence is too damn close to complicity 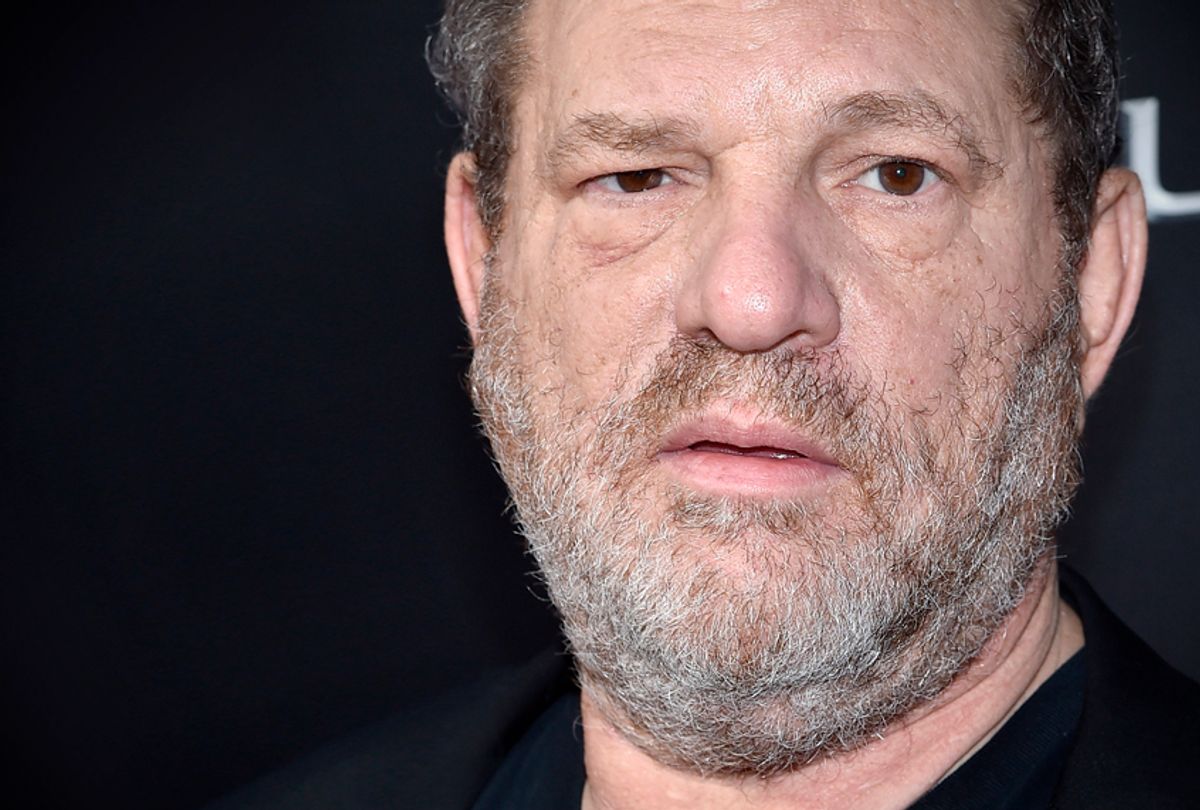 Harvey Weinstein represents an enormous cultural and social problem, one we have known about for too long, tolerated for too long, accepted for too long. That powerful people (usually men) abuse their power to exploit others is no big secret. That powerful men sometimes use their power to sexual advantage, harassing, abusing or assaulting women (or men) who work for them is also not exactly breaking news. It’s a pattern woven into the fabric of our society, whose origins run deep into the past of our species. To state what ought to be obvious, the problem is not limited to the entertainment industry or any other field of human endeavor. It affects the lives of people of all genders, all races, all backgrounds and all walks of life.

But the burden of articulating and addressing this problem — let’s not say anything quite yet about solving it — is not being borne equally. Since the revelations came to light about Weinstein’s decades-long career of alleged sexual misconduct, seemingly directed at almost every younger woman ever associated with his films or his companies, women have been coming forward. They have done so by the hundreds, by the thousands, by the hundreds of thousands, to break silence and forge a new sense of shared solidarity and awareness. They have lodged accusations, made confessions, shared often painful personal histories; they have written angry Twitter-bursts and long, introspective articles. They have galvanized or joined social media campaigns that spread more like California wildfire than like a metaphorical virus.

Men, for good reasons or bad — or some of both, quite likely — have largely stood aside, unsure about what to say or how to respond. I shared that reaction at first; I’m not trying to claim some enlightened perspective outside the combat zone. But I have now concluded that that silence, that uncertainty, that unease — even when configured as “respect” or as “listening to women” — is itself a symptom of the underlying problem.

Listening respectfully to women’s words and women’s stories is essential, don’t get me wrong. (For those of us who have grown up as white dudes with upper-middle-class backgrounds and expensive educations, it’s definitely a learned skill.) Many well-intentioned guys no doubt felt leery of wandering into the mansplain-zone: Let me tell you what’s really going on with the so-called sexual harassment problem, ladies! But women cannot do all the talking and all the thinking on this issue, my brothers — especially not when what women are talking about and thinking about is our behavior. OK, of course I don’t mean “our” behavior as in you and me, because we would never! But then, what accounts for our awkward silence, for our profound discomfort, for that unpleasant acid-reflux sensation of complicity?

If the Harvey Weinstein moment is to mean anything, piled right on top of the Donald Trump presidency — and this does feel like a landmark in American or Western gender relations, as Clarence Thomas and Anita Hill did a generation ago — then men have to find their voices about this stuff. I’m not claiming that will be easy. Sometimes it will be embarrassing, sometimes it will sound defensive and not infrequently it will be painful. At the risk of descending into hoary cliché, many of us are not great in that terrain.

To go still deeper into gender stereotype, nothing is more threatening to conventional norms of masculinity (which remain ingrained in me and virtually every other cisgender male on the planet) than to appear vulnerable and incapable — to appear that you don’t know what to do or where to go. Someone who is confused or dispirited is still sometimes described as “unmanned,” which Merriam-Webster defines as “deprived of manly vigor, fortitude, or spirit.”

If you are old enough to remember life before Google Maps, you will also remember the antique witticisms about how Dad would rather wander the back roads forever than ask a stranger for directions. I have been that dad, as was my father before me, but consider the dark side of the shtick: A “real man” would rather subject his family to hunger, boredom and a flea-infested motel room in Bakersfield than reveal his fragility or weakness to another man.

To confront the underlying pattern in our social carpet that enables someone like Harvey Weinstein to do what he allegedly did, across many years as one of the most powerful, influential and respected people in the culture industry, will demand some degree of “unmanning.” It will require honesty, vulnerability, uncertainty and an open discussion of our own incapacity. Because, my dudes, we don’t know what to do or where to go. We have been wandering in the darkness, with no map and no bars on the cell phone, pretending to understand things we don’t. We have endangered women we cared about. We have let each other down. It’s time to ask for directions, and work together to find the road that leads forward.

Doing this will also require the violation of the silent but ubiquitous masculine code, and breaking the male conspiracy of silence. That sounds noble but it is extremely difficult in practice. Most men have not assaulted or abused women in the way Harvey Weinstein has been accused of doing. Most men (I am fairly sure) haven’t harassed women in the workplace either, although such conduct was and is distressingly common and all too easily swept under the wall-to-wall carpeting.

But absolutely every man (and a lot of women too) — and I say this without fear of contradiction — has observed such things happening and laughed it off or backed away. It isn’t my problem. They’ll work it out. She was laughing about it. She’ll complain if she was really uncomfortable. He’s a great guy, but kind of a Neanderthal. Get a little booze in him and he gets handsy. Can you believe he said that thing, that time? Really ought to tell him to dial it back, at some point.

I believe I have treated all the women I’ve worked with across nearly 30 years in journalism with respect, and I hope they would agree. I’ve had female bosses, female mentors, female employees, female protégés and lots of female peers. I can think of at least one woman who probably still hates my guts (I fired her, so fair enough) and several others who made me smarter, tougher and better at my job. Which is all great. But when I look at the list of excuses, apologies and evasions in the paragraph above, I’ve pretty much done all that too. So have you, more than likely, if you’re a guy. (And maybe if you’re not.)

In effect, I have respected the masculine code that protected Harvey Weinstein and thousands or millions of other men who are less famous or perhaps less egregious. I told myself I didn’t approve of it and I assured myself I wasn’t like that, but I didn’t actually do anything about it. And I know — again, with zero fear of being wrong — that I was not alone. That’s what has to end, if we are to begin to unravel the dark pattern in the carpet. I’m not saying I know how to make that happen. It’s not quite like flipping a light switch, is it, guys?

There’s a story I used to tell about my own teenage innocence, often to impress or attract women. I think I never understood its hidden meaning until now. I grew up in the San Francisco Bay Area in the 1970s and was pretty thoroughly indoctrinated with feminism. My mother was an English professor at a women’s college known for its radical politics and its high proportion of lesbian students, and I spent many afternoons hanging out there as a sort of junior male mascot. I attended poetry readings where I was the only cisgender male in the room (although that term would not enter the lexicon for quite a few years). Although my mother could be scathing and sarcastic about the women’s movement, she was one hell of a feminist role model. I could not possibly have concluded that women were less intelligent, less capable or less tough than men.

When I left home to attend an elite university on the East Coast, I was startled to see so many young men wearing shoes without socks (which I initially assumed was a laundry shortfall) and shocked at how the guys in my lacrosse-centric freshman dorm talked about girls. It was pretty standard “locker room talk,” to use the infamous Trumpian expression, but it was new to me.

You can probably fill in the details for yourself. Young women from the dorm across the quad, or the nearby women’s college, were defined as targets, with varying degrees of difficulty or desirability. The objective, on Saturday night, was to get one of them drunk, back to your room and then out the door again before campus curfew at 1 a.m., so you didn’t have to wake up with her. Less attractive girls were deemed likelier to consent to oral sex or anal sex or a gang bang. In any case, I was assured, after enough grain-alcohol punch the issue of whether she had said “yes” or “no” stopped mattering.

I was genuinely appalled by both the tenor and content of this braggadocious chatter, by the way these otherwise normal young men talked about other human beings with evident contempt, and casually contemplated actions that sounded dangerously close to rape. That was the point of telling the story to female friends or prospective partners in the first place: I’m such a feminist dude I didn’t even know other dudes were like this! But it has taken me until 2017, when I am a middle-aged journalist with a teenage daughter and son, to notice the denouement to this story. I didn’t do a goddamn thing about it.

Oh, I felt plenty horrified and more than a little superior. I shared the story with my circle of like-minded friends who wore black clothes and read poetry and were sure to agree that the lacrosse dudes were troglodytes. But I rapidly and indeed almost instantaneously absorbed the ethos of the masculine code, where predatory behavior toward women is a tribal secret. If you’re too much of a girly-man to play the game, fine. But you don’t question it, you don’t challenge it, and you don’t discuss it outside the tribe.

I didn’t really hang out with the lacrosse guys in my dorm after that, and I’m sure they concluded I was a pussy. Did I try to confront them or shame them? Of course not. Actually, I'm whitewashing a little: One of them became my friend for a while. He was into David Bowie and always had good weed and told funny stories about his extended Eastern European family. I would tell you right now that he wasn’t like those other guys, that he had a good heart and hadn’t meant any of that stuff and probably never abused or mistreated women. It might be true. But that’s the problem with the Harvey Weinstein moment, right? That’s what’s behind all the silence and all the uncertainty. We’re not quite sure what to think about our friends, our bosses, our co-workers. About ourselves.