45*: The president who shouldn't be

Under the flawed rules of our system, Donald Trump is the president. But his legitimacy is very much in question 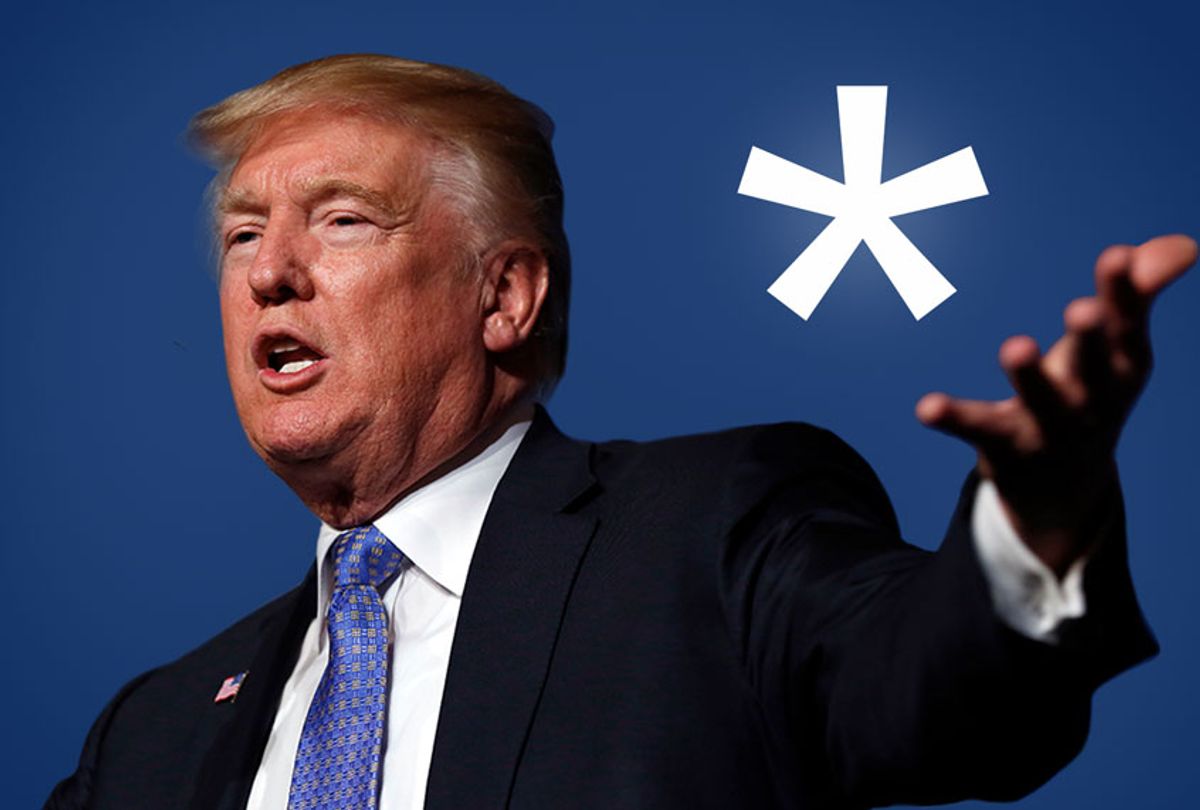 What is an asterisk?

In sports an asterisk is often used -- either literally in print or symbolically in the minds of fans -- to indicate that a given person's or team's achievements are questionable, a "special case, "or somehow in doubt. Baseball has several such examples. Roger Maris broke Babe Ruth's long-standing single-season home run record but played a longer season. Mark McGwire broke that record in 1998, hitting 70 home runs. Barry Bonds broke it again three years later, hitting 73, and went on to break Hank Aaron's career home run record. But both those players have been accused of using steroids (McGwire has admitted it), and many fans view their accomplishments as tainted. Neither has been voted into the Baseball Hall of Fame. Other sports -- yes, even bowling -- have wielded the power of the asterisk as well.

Could the asterisk be applied in American politics? Consider the case of Donald Trump.

Donald Trump is, by many standards, an illegitimate president. Not because he won the election with far fewer votes than his opponent. That may be unfair or unreasonable, but it is clearly constitutional. Trump does not believe in the basic principles of American democracy. He encouraged a hostile foreign power to interfere in the 2016 presidential election with the goal of installing him in office. The available evidence suggests that he and his inner circle may have colluded with Russian agents in order to defeat Hillary Clinton and to undermine the Democratic Party more broadly. He has failed to meet both the formal and informal responsibilities expected of the country's leader.

Political scientists and historians have applied a range of criteria for evaluating a given president. These benchmarks include political vision, meeting policy goals, communicating with the public, moral leadership, crisis management, success in working with Congress and economic stewardship. These standards are usually applied after a president has left office so his successes and failures can be put in proper context. Nevertheless, one can attempt to extrapolate how a president's legacy may reflect their behavior in the present. By these measures, Donald Trump is a horrendous failure.

On this point, McGill University's Gil Troy, who is a historian and author of numerous books including "The Age of Clinton: America in the 1990s," "The Reagan Revolution: A Very Short Introduction" and "Why Moderates Make the Best Presidents," told Salon, "The modern, post-FDR president has an important job to do in terms of tone-setting and helping to shape the national conversation as well as the national mood. And even judging Donald Trump on his own criteria -- making America great -- we have to admit that he has been a dismal failure so far, and will be dismissed as a failure if this continues.

"Trump has proved himself to be quite clever at playing to his base, at riling his base," Troy continued. "But that's not leadership, and that's certainly not presidential leadership. Rather than 'making America great again,' he has made it crankier, more divided, more frustrated than it was when he entered office -- if that continues, that colossal leadership failure will cloud his legacy, and it should. Similarly, he has so far shown a remarkable inability to get things done, to build the legislative coalitions he needs. Regarding specific issues, history needs its time to unfold. But these bigger trends are worrisome."

Troy does not believe Trump would (or should) receive an asterisk on his presidency. However, he sees another scathing possibility.

"I wish Donald Trump long life. But, if, and I say if, things continue in this way, Trump's obituary won't be his pre-political obit: Trump, the man who gilded America -- or his post-Nov. 8 obit -- Trump, the businessman who successfully won the presidency in an upset. It will be Trump, the guy who got in way over his head, or to speak more telegraphically, Trump the seeming business success who became a presidential failure -- and exposed his business success as a sham too."

Of course, impeachment and conviction would be the ultimate asterisk on Donald Trump's presidency. But it is increasingly obvious that despite whatever evidence of untoward, immoral, unethical and perhaps even criminal behavior exists, the Republican majority in Congress will not impeach Donald Trump.

An asterisk next to Donald Trump's name would accomplish several things. Symbolically, it would signal to the world that Donald Trump was a national mistake and a global embarrassment. By law, he may be America's president. But Trump is not the president of the American people. Instead of skulking off in shame as some of Trump's voters will likely do, future generations will see this asterisk and be prompted to learn more about this national calamity and how it came to pass. Trump and his administration may very well be thrown down the memory hole of American politics. The asterisk is one small, symbolic way of trying to fight back against this possibility.