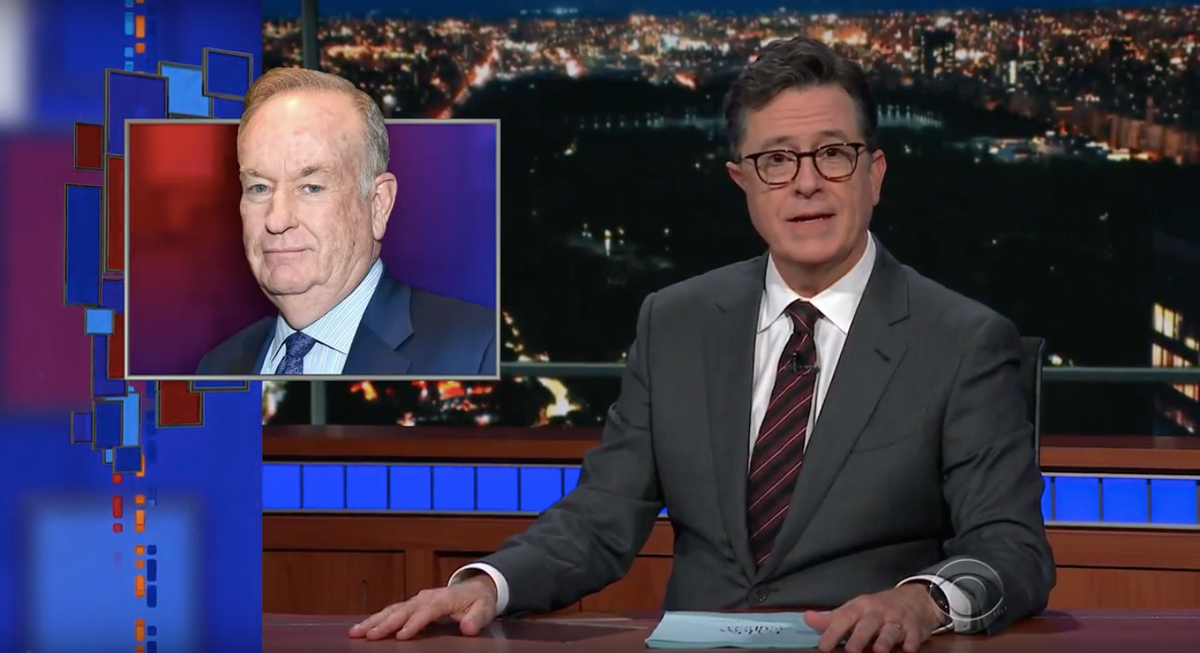 Late-night comedy could barely articulate Monday how insane it was that Fox News extended the contract of former host Bill O'Reilly one month after he reached a $32 million settlement for alleged sexual abuse.

The late shows had already given O'Reilly a proper sendoff back in April, after Fox News fired him for repeated claims of sexual harassment and misconduct.

"Late Show" host Stephen Colbert announced the floodgates were open in his monologue Monday, pointing out that a lot of powerful men were being outed for their past transgressions.

“We’re in, sadly, the midst of a flurry of sexual harassments and assault allegations against some pretty big names in showbiz,” Colbert said. “Producers like Harvey Weinstein, directors like James Toback, even former reality-show hosts,” he added, just as President Donald Trump’s face appeared on the screen. “And of course, former Fox News pundit and scrotum who wished to be a real boy, Bill O'Reilly.”

Colbert still could not unravel how Fox News allowed O'Reilly to stay at the network for so many years.

“Fool me once, shame on you. Fool me twice, some more shame. Fool me three times, you really got to do a better job of fooling me. Four times, we're extending your contract. Five times, we wish the best of luck to Bill in all his future endeavors — now, enjoy the Tucker Carlson show!”

Trevor Noah recognized Monday how silent many Republicans and conservatives were in the wake of the new news regarding O'Reilly and Fox News.

“I’m still blown away O’Reilly had to pay one woman $32M. Now I understand why he cranks out so many books,” Noah joked.

The late night comedian noted that liberal Hollywood and conservative Fox News both have problems with sexual predators, but insisted the horrible reality should not be partisan.

"Everyone has an issue: Wall Street, Silicon Valley, constructions sites — basically every place that has men,” Noah said. “And Fox was right to call it out. Not because they can score political points, but because it’s the right thing to do. So, Fox News, please keep going after sexual harassers. I applaud you. And the great news is, you don’t even have to leave the building.”

The Daily Show with Trevor Noah

"Wow, you paid a $30 million settlement and they let you keep working there? I guess we know what we can look forward to," Meyers said, before a graphic appeared on screen of Weinstein hosting his own show, "The Weinstein Factor," on Fox News.