Does the military have a white nationalism problem?

Most service personnel reject racism, but the military is still a fertile recruiting ground for extremists 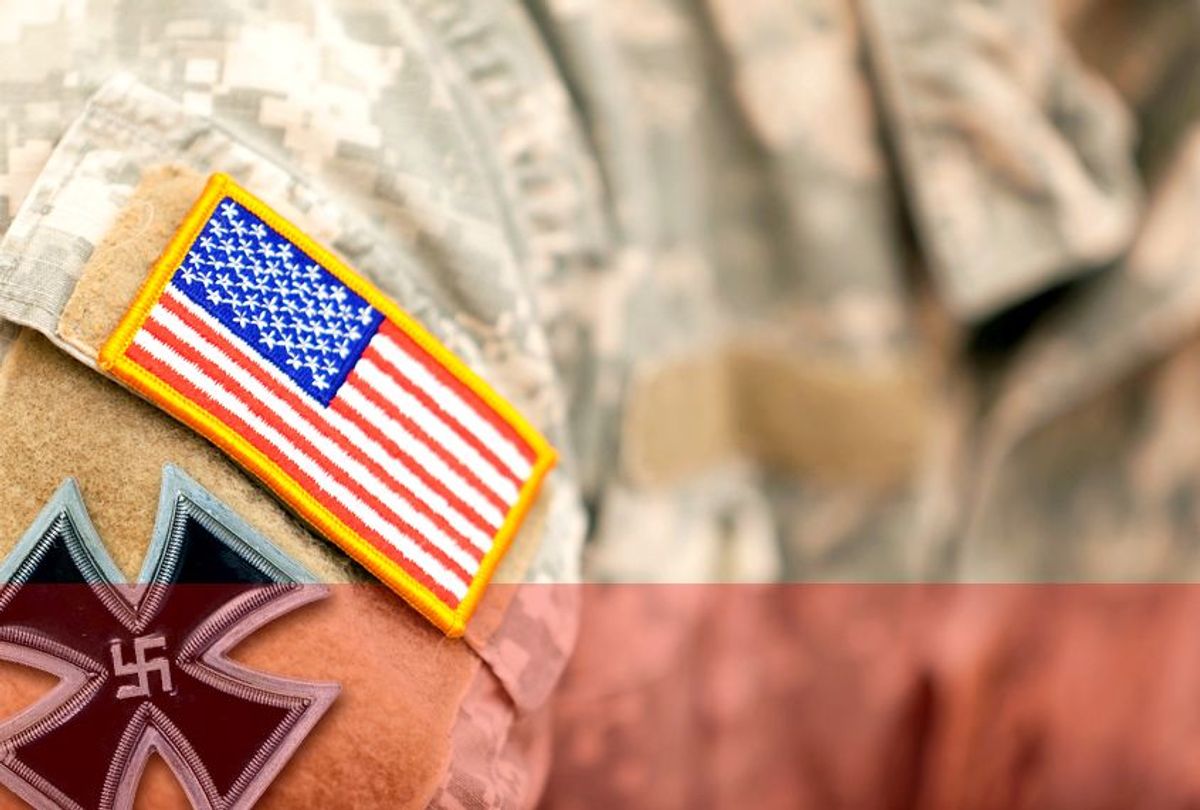 The United States, especially with an overt racist in the White House, has a growing white nationalism problem — and this goes double for the U.S. military, according to a recent poll conducted by the Military Times. Pollsters found that nearly one in four service members — and more than 40 percent of people of color in uniform — had encountered someone espousing white nationalist views in the military. This perception was backed up by the fact that 5 percent of the people polled used white supremacist tactics, such as trying to equate white nationalists with civil rights groups like Black Lives Matter, to distort the situation and minimize the problem.

“This makes starkly clear something that a lot of us have known and has been kind of an open secret within the military for a long time," said Alexander McCoy, a former Marine and the communications director for Common Defense, a progressive organization supporting troops and veterans. "There is a disturbing and dangerous undercurrent of tolerating white nationalism, particularly now with Trump as commander in chief.”

“This is an ongoing problem," explained David Neiwert, a journalist who studies right-wing extremism and recently published a book entitled "Alt-America: The Rise of the Radical Right in the Age of Trump." “It became a concern back in the '90s, during the first Gulf War, and then it became more intense during the Iraq war.”

While Trump's ascent to power has likely made the problem worse, McCoy explained that for many years "white nationalists and racist militia movements in the United States have made a targeted, concerted effort to infiltrate the military community."

In 2008, the FBI released a comprehensive report on this phenomenon, titled "White Supremacist Recruitment of Military Personnel Since 9/11." It noted: "Extremist leaders seek to recruit members with military experience in order to exploit their discipline, knowledge of firearms, explosives and tactical skills as well as [in the case of active-duty soldiers] their access to weapons and intelligence."

Efforts to tackle the problem were stymied in 2009, however, when the Department of Homeland Security released a similar report detailing the national security expert concerns about a potential rise in white supremacist activity that might follow the election of a black president. Sensing an opportunity to score political points against Barack Obama, the right-wing pounced, falsely accusing the Obama administration of trying to paint everyone with conservative views as a terrorist. The Obama administration then made the grotesque error of repudiating the paper, authored by domestic terrorism expert Daryl Johnson, and cutting resources devoted to fighting white supremacist movements.

It was arguably one of Obama's biggest mistakes. (He eventually learned not to flinch in the face of right-wing lies, but it took a while.) There was indeed a significant rise in right-wing terrorism, just as Johnson had predicted. And much of it has been fueled by white nationalists and their sympathizers, who either seek out military experience or become radicalized in the military.

“It creates what we call the Timothy McVeigh syndrome," Neiwert explained. “These guys are, by nature, better trained at killing people. They are better trained at using materials, using weapons, having strategies that are designed to pull off military operations.”

In 2011, Kevin Harpham, an Army veteran, attempted to bomb a Martin Luther King Jr. Day parade in Spokane, Washington. Wade Michael Page, who killed six people at a Sikh temple in Wisconsin in 2012, appears to have begun embracing neo-Nazi views during his time in the Army. In the same year, a group of former and active military members were arrested for plotting to assassinate Obama -- and for killing two of their own co-conspirators to keep their plans secret. James Alex Fields, the white supremacist who crashed his car into a crowd of anti-racist protesters in Charlottesville, killing Heather Heyer — also served in the military. The leader of Vanguard America, the neo-Nazi group to which Fields allegedly belonged, served as a Marine in 2005.

None of this should be interpreted to mean that the military is itself a racist institution, McCoy said, noting that most troops in the Military Times survey rejected white nationalism. "But I would say that white nationalists are attracted to the military."

“What we’ve seen is these extremists often cloak themselves in the imagery and the legitimacy of the military, in order to try to justify their ideology," he added. "They’ll try to use the military as props."

When McCoy was serving, he explained, there was a scandal involving a Marine scout sniper platoon that was discovered to be using a Nazi SS flag and insignia. McCoy recalled his barracks being raided, in an effort to discover who else might be hoarding Nazi paraphernalia. The story, he said, illustrates the tensions at play here. On one hand, there are many people in the military with white nationalist sympathies. On the other hand, the military sees that as a problem and is willing, at times, to try to stop the spread of a poisonous ideology that is clearly a risk to national security.

Still, McCoy said, he is worried that "we have a commander in chief who has emboldened white nationalists." In the face of the problem, he argued, the military and the veteran community need to be proactive in trying to stop white nationalist and other far-right groups, such as the Oath Keepers, who target military personnel for recruitment.

Neiwert recommended that the military turn up efforts to keep "drumming these guys out," and perhaps offer a program of "education within the ranks about the real dangers that these people and these ideologies pose to national security."

As the Military Times survey showed, many service members already understand how serious a problem right-wing domestic terrorism is. Thirty percent of those polled said white nationalists pose a greater threat to national security than do Syria or Afghanistan. This polling data aligns with the statistical fact that right-wing terrorists have killed more people in the United States since 9/11 than Islamic jihadists.

Still, too many Americans, intimidated by the place of honor that military service has in our society, are afraid to look too closely at the problem of racism and right-wing extremism in the military. Certainly, that fear of not appearing to "respect the troops" fed into the Obama-era decision to back away from investigating and preventing domestic terrorism, and the Trump administration has only become more aggressive about denying or minimizing the problem. At least for now, it's up to the military to police itself and drive these dangerous fringe groups from the ranks.