Trump tweeted that Virginia governor candidate Ed Gillespie "might even save our great statues/heritage!" 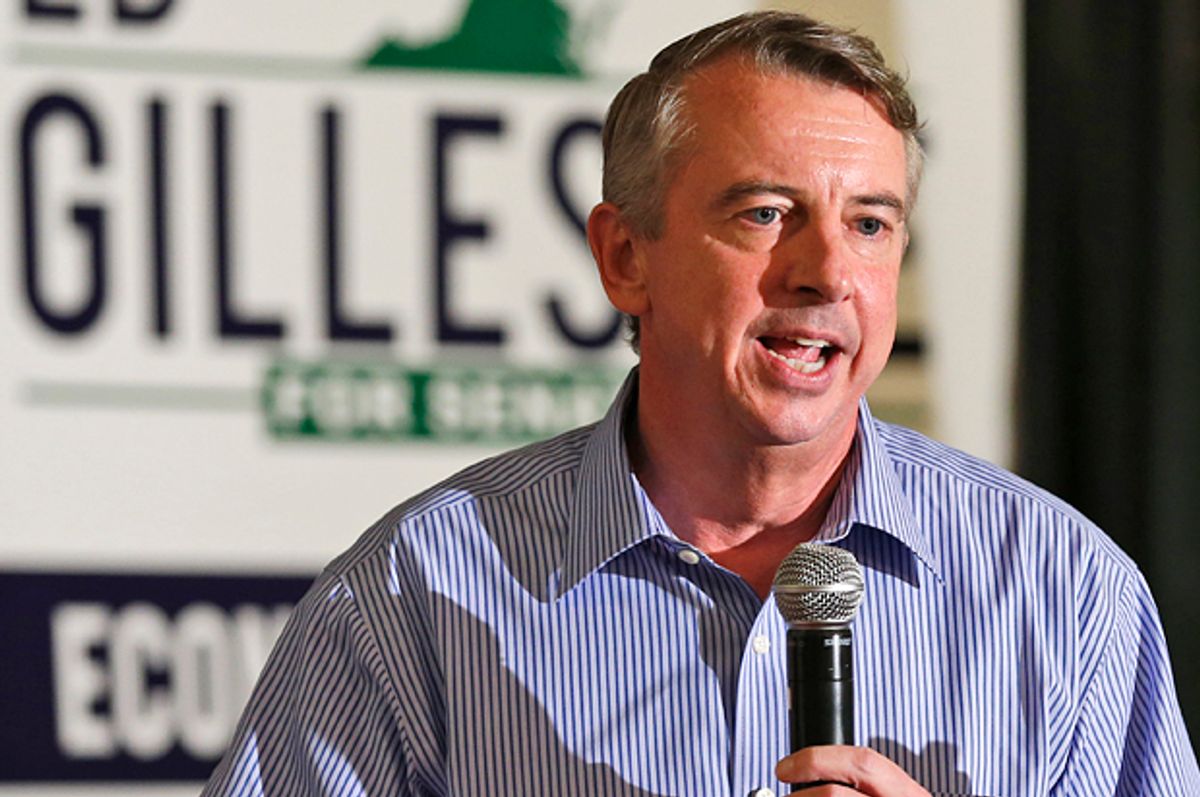 Despite doggedly trying to avoid making the Confederate monuments controversy into an albatross around his campaign's neck, Virginia's Republican candidate for governor has been forced to the right on that issue by President Donald Trump.

Gillespie has subsequently retweeted both of those tweets.

Trump's tweeting may have put Gillespie in an awkward situation. His campaign has struggled to appease Trump's far right base by not denouncing the Confederate monuments in Virginia and criticizing his opponent, Democrat Ralph Northam, for wanting to take them down.

"I’m for keeping ’em up, and he’s for taking ’em down. And that’s a big difference in November," Gillespie claimed in a recent campaign ad.

At the same time, Gillespie has also worked hard to somewhat moderate his pro-monument tone. On his campaign website, Gillespie has specifically denounced "seeking to sustain the evil institution of slavery in the Civil War" of Virginia and Virginians acting as "leaders in oppressing people and denying them their freedom." Gillespie also argued that the issue of what to do with Confederate monuments could be best resolved at the local level and cited the approach of Richmond as one that he would like to emulate.

"While not removing statues, they are weighing how to put them in proper historical context," Gillespie wrote. "There is a balance that can be struck here, one that recognizes the outsized role Virginia has played in our history, while acknowledging that we have not always been on its right side."

The issue of taking down Confederate monuments is especially sensitive in Virginia. In August, white supremacists marched on and caused violence in the Virginia town of Charlottesville to protest the removal of a statue of Gen. Robert E. Lee. A few days later, Trump stirred up controversy when he defended the racist protesters as "very fine people" and openly opposed removing the Confederate monuments.

Things have not calmed down in the months since that controversy. Earlier this week, the DeKalb County Commission in Georgia voted to remove a 109-year-old Confederate monument in Decatur. Meanwhile new monuments have been put up by Confederate sympathizers in states like Alabama, Georgia, South Carolina and Tennessee. Overall, the Southern Poverty Law Center has estimated that more than 30 Confederate monuments have been put up since 2000, indicating that the issue is not merely one about protecting and preserving monuments that may in and of themselves have historic value.