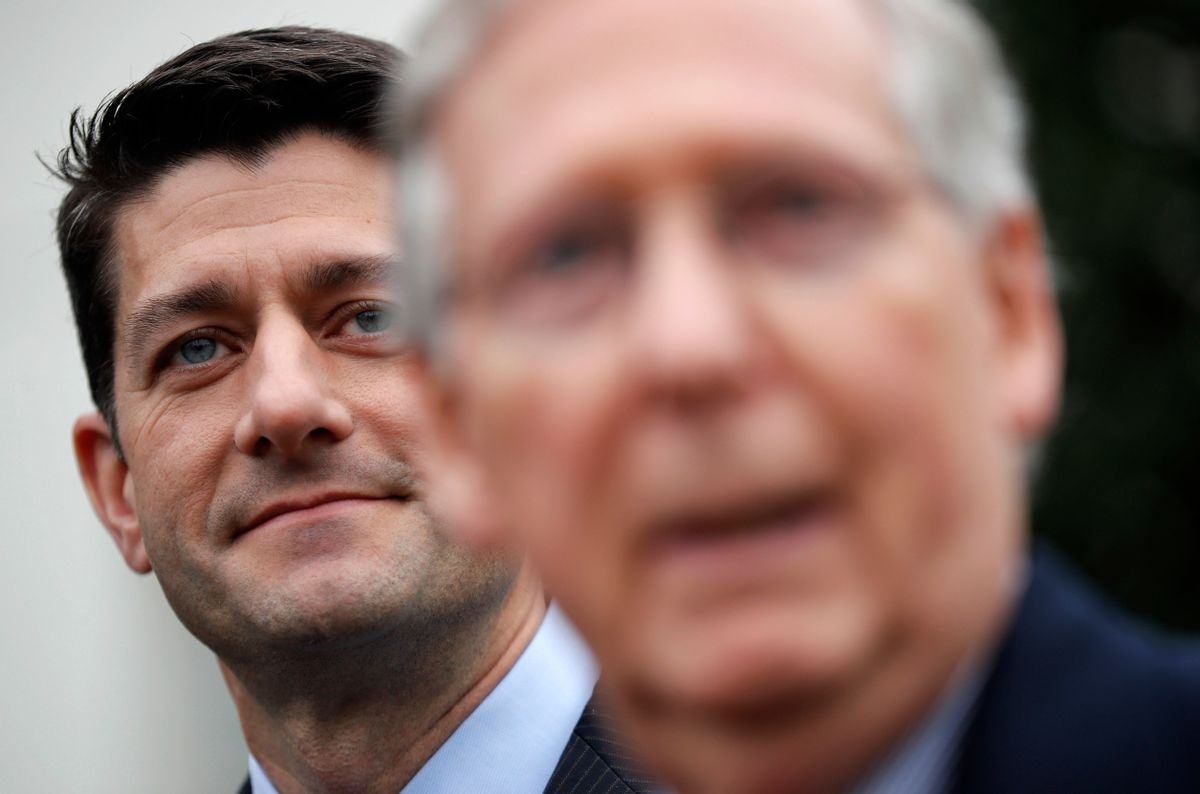 The Republicans in Congress are the "most hated politicians” in America, with Senate Majority Leader Mitch McConnell and House Speaker Paul Ryan being the body’s most loathed leaders, according to a national survey by Democracy Corps, a Democratic Party-affiliated pollster.

“About nine months into his presidency, Donald Trump has settled into a historically weak job approval of 41 percent, well below his presidential vote, and with the strong disapproval over 45 percent of voters,” the report opens. “Yet the most hated politicians are the Republicans in Congress, and perhaps they ought to be more of the focus as they are on the ballot in 2018. Mitch McConnell is the least popular congressional leader in Democracy Corps’ polling, followed by Speaker Ryan.”

But Democracy Corps’ polling also found a striking counterpart: the Democrats have not yet refurbished their political brand and voter appeal, despite the GOP’s dwindling stature across the American electorate.

“Voters know that the Republicans are in charge in Congress and these are the poster children,” Democracy Corps said. “So why do the Democrats not enjoy a stronger lead in the ballot?”

The nationwide survey of 1,000 registered voters taken between Sept. 30 and Oct. 6 reveals a reality Democratic Party leaders are reluctant to discuss. Namely, the party as an institution, and its potential 2018 candidates, have not emerged from their 2016 losses in a way that’s generating new engagement sufficient to win back congressional majorities next year. If anything, they’ve slipped further behind, compared to a June poll by Democracy Corps.

“The Democrats are ahead by just 8 points among registered voters, and 5 points among likely 2018 voters in Democracy Corps’ most recent national survey,” the pollsters said. “That is marginally down from the 10-point and 7-point advantages (among registered and likely voters, respectively) Democrats held in our June polling.”

While the polling firm, led by longtime Clinton circle associates Stan Greenberg and James Carville, didn’t name names, their analysis is a brutal indictment of the Washington-based Democratic Party leaders’ inability to convert anti-Trump and anti-Republican Congress anger into what should be a winning political trajectory. Greenberg and Carville are fully aware of the structural electoral advantages Republicans have engineered over the past decade. The combination of extreme partisan redistricting of House seats and GOP catalog of voter suppression tactics, starting with stricter ID requirements to obtain a regular ballot, has given the GOP a 10-point lead for 2018’s elections.

That means the Democrats need a super-big wave, with the base turning out a minimum of 10 percent more voters, to take back congressional majorities. Yet Greenberg and Carville’s report finds the Democrats are falling far short of that threshold, starting with the overall attractiveness of their party’s brand.

“The focus should be more on the GOP Congress, but contributing is the Democratic Party brand, which is unimpressive in this poll,” the pollsters said. “They are viewed more favorably by just net 4 points. There has been no growth in identification with the Democratic Party, as there was in going into 2016.”

“This dynamic is producing a situation where self-identified Democrats, generic Democratic voters and Hillary Clinton supporters hold their preferences with great certainty, but they are no more likely to turn out for Democrats in the off-year election, according to this poll,” they continued. “A remarkable 81 percent of Democrats strongly disapprove of Donald Trump, while just 55 percent of Republicans strongly approve of his job performance. Those voting for the Democrat for Congress are more certain of their choice by 62 to 38 percent, while those voting Republican are split in their certainty (52 very certain to 48 percent somewhat certain). Yet when it comes to the measures used to gauge interest and intention to vote, Democrats and Republicans are showing equal engagement. That will not produce the landslide election Democrats are hoping to achieve.”

That last conclusion—that Democrats are not on track to win back the House or the Senate—is not the only striking finding. The pollsters also said that the party’s economy-based messaging, which has been a large part of its response to Trump and Bernie Sanders’ presidential bid, may be the wrong strategy today. In contrast, they suggest that Trump’s messaging guru, white nationalist Steve Bannon, may be striking a deeper and more resonant chord by “fanning the flames of identity politics” around resurrecting white Christian America.

“Maybe Steve Bannon is right that stoking the flames of identify politics creates an environment where Democrats calling for big economic change don’t get heard,” they said. “We saw in the polling we recently released with Public Citizen that Donald Trump has high approval marks when it comes to ‘keeping jobs in the US’ (+27) and ‘putting American workers before the interests of big corporations’ (+7).”

Polls, as everyone knows, are useful snapshots in time. But as the 2016 election showed, they are not definitive or entirely predictive. With that caveat, Greenberg and Carville’s firm highlighted two trends to track. The first is how the Republican Congress’ disruptions of the health insurance markets are likely to push voters age 55 and above toward Democrats, because GOP efforts to gut Obamacare and hollow Medicaid and Medicare are causing tremendous financial pressures.

“First, watch the seniors and Baby-Boomers,” they wrote. “With acute sensitivity to the impact of health care changes, seniors and Boomers are giving particularly high negative marks to Trump and Republicans. The Democrats even hold a 2-point lead in the generic ballot among seniors, breaking the age pattern (of seniors supporting the GOP) that has shaped our recent elections.”

The second trend to watch is how Sen. Elizabeth Warren, D-MA, fares in hypothetical match-ups against Trump in 2020.

“Second, in our first poll testing a 2020 presidential contest between Donald Trump and Elizabeth Warren, the Senator wins by 12 points (54 to 42 percent),” they said. “In coming polls, we will test other potential nominees, but that result is some measure of the real structure of the partisan balance.”

While that’s an eyebrow-raising finding—on par with 2016 polls finding Sanders beating Trump—the 2020 election is a light year away. Up first is this November’s governors’ races in Virginia and New Jersey, where, especially in Virginia, the GOP candidate embodies that party’s most draconian pre-Trump qualities.

And then comes 2018. Besides congressional races, many of the most extreme red-state governors face term limits (Florida, Georgia, Ohio, Michigan). Electing Democrats in those states would go a long way to vetoing the political maps their red supermajority legislatures will likely draw after the 2020 census, which will dictate how extreme the next decade’s political landscape will be.

But back to the 2018 congressional elections. As Greenberg and Carville note, their party now lacks a message and brand sufficient to unseat the GOP. The Democratic National Committee, which met earlier this month, has done almost nothing to bridge the gap between Clinton and Sanders factions.

The window for internal party healing is going to close in the near future, as figures like House Minority Leader Nancy Pelosi start announcing some of the candidates they will be putting forth to win the 24 seats needed for a majority. The Democracy Corps’ latest survey should be a grim wakeup call. But as it suggests, the Democrats are responding with messaging that counters what Trump did in 2016, not what Bannon is doing right now.