He's not what you thought he was... he's worse 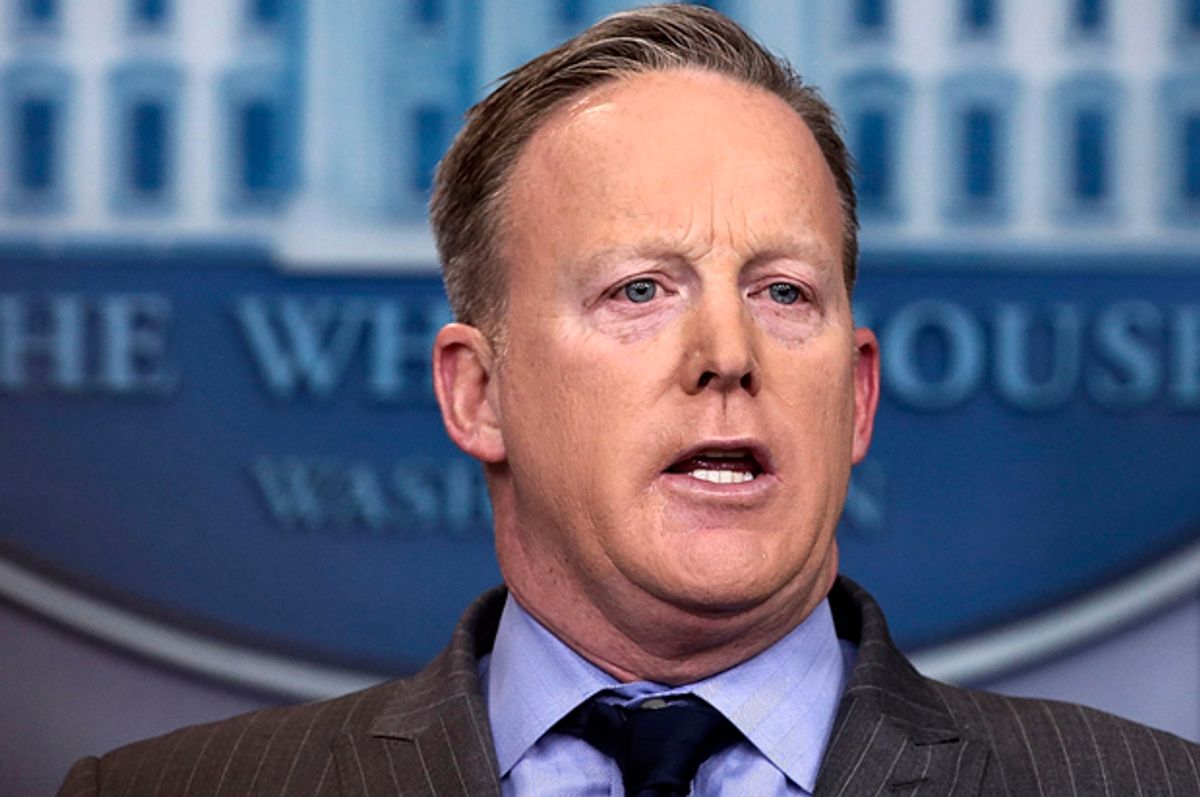 Sean Spicer has been on a rebranding tour since he left the White House in an effort to make us forget all the hard work he did spreading the contagion of this administration’s dangerous lies. Aiding him in this undertaking is Harvard University, which gifted Spicer with a fellowship from its Kennedy School of Government for the fall semester. (Perhaps concerned that one Trump propagandist wouldn’t cut it, Harvard also recruited former campaign manager Corey Lewandowski, while Chelsea Manning, incredibly, was disinvited.) According to a press release, Spicer is a “distinguished veteran of public life” selected to “fulfill the Institute's mission of engaging students in discourse on topical issues of today.” The announcement did not mention whether he’ll be instructing young scholars on the art lying through your teeth about nonexistent voter fraud, inauguration crowd sizes, Hitler’s unheralded scrupulousness and the encrypted brilliance of “covfefe.”

The Huffington Post spoke with students who have taken part in Spicer’s Q&A sessions to see how things are going, and the short answer is, not so great! One of the most unenthused reviews came from a student who bemoaned the difficulties of keeping any kind of record of Spicer’s lessons, stating, “He’s incredibly inarticulate, so it was really difficult to take any sort of notes.”

Another noted, “The entire thing was just a defense of every waking moment he served."

Spicer’s sessions aren’t for public consumption, so no transcripts or recordings have been circulated. But according to students HuffPo interviewed, the cushy assignment is mostly filled with with softball queries. “No questions were pre-screened, but the sessions’ moderators had full control over who was able to get in a question,” the outlet notes. “Spicer, for his part, had his talking points ready” and “regardless of the question...tended to circle back to a few familiar themes. Benghazi, for instance.”

A key to Spicer’s on-campus discussions is his admission that he’s still in the tank for this lousy administration. He told a student group that his general, overarching plan for the future is to “continue to support the Trump agenda.” So it’s unsurprising that the defensiveness and obfuscation that defined his time as press secretary are still obvious in statements students recalled for HuffPo. When challenged on why he propagated the Trump administration’s lies, he basically told students lying was what he was paid to do. “I’m a spokesperson for the president,” Spicer reportedly told the group, “and my job is to say what he wants me to say.”

Though Spicer essentially admitted that his whopper about Trump’s inauguration crowd size kicked off his six-month White House tenure, he appeared to rededicate himself to defending the lie again while speaking at Harvard. “I said in the first press conference that the inauguration was witnessed by the most people ever,” he told students “so I was also talking about social media and online reporting of the inauguration, not just crowd sizes, which are obviously hard to calculate.”

Spicer also tried to blame the press for the Trump administration’s notorious lack of transparency, which includes prohibiting press from recording briefings in any form. Instead, Spicer tried to depict himself as a super chill flack who maintained an open-door environment, allowing anyone with a press pass to randomly swing by and get the information they needed.

“Reporters had the chance to go and knock on my door and see me anytime,” students recall Spicer saying, “but they would only ask questions during the White House press briefing so they could be on camera. They could have asked me at any other time of the day.”

In response, numerous White House reporters tweeted pictures of long lines of press waiting at the door to Spicer’s office on multiple occasions. As if we needed evidence, other than the fact that his lips were moving, that Spicer isn't telling the truth.

Possibly recognizing that it would be a bridge too far to attempt to spin anything the Trump team has done as beneficial for the country, Spicer was at least realistic about the high points of his job. “My proudest moment as press secretary was getting the opportunity to give people tours of the White House,” he reportedly stated.

And presumably in response to a question about what he was sorry for, Spicer told students he “regret[s] a lot of things. I regret things every day of my life, and I apologize.”

In any case, students report that Spicer seems neither unfairly maligned nor misjudged for his work as town crier for the lying liar in the Executive Office.

“I learned that the media was not misrepresenting him in how they were talking about him six months ago,” a Harvard Kennedy School student told HuffPo. “I was kind of expecting him to be better than how he was portrayed through the press, but he was pretty much just as slimy and weaselly as I’d thought he was.”