Even when the NFL story was old and the fire story was new, Fox gave more coverage to the Trump-triggered narrative 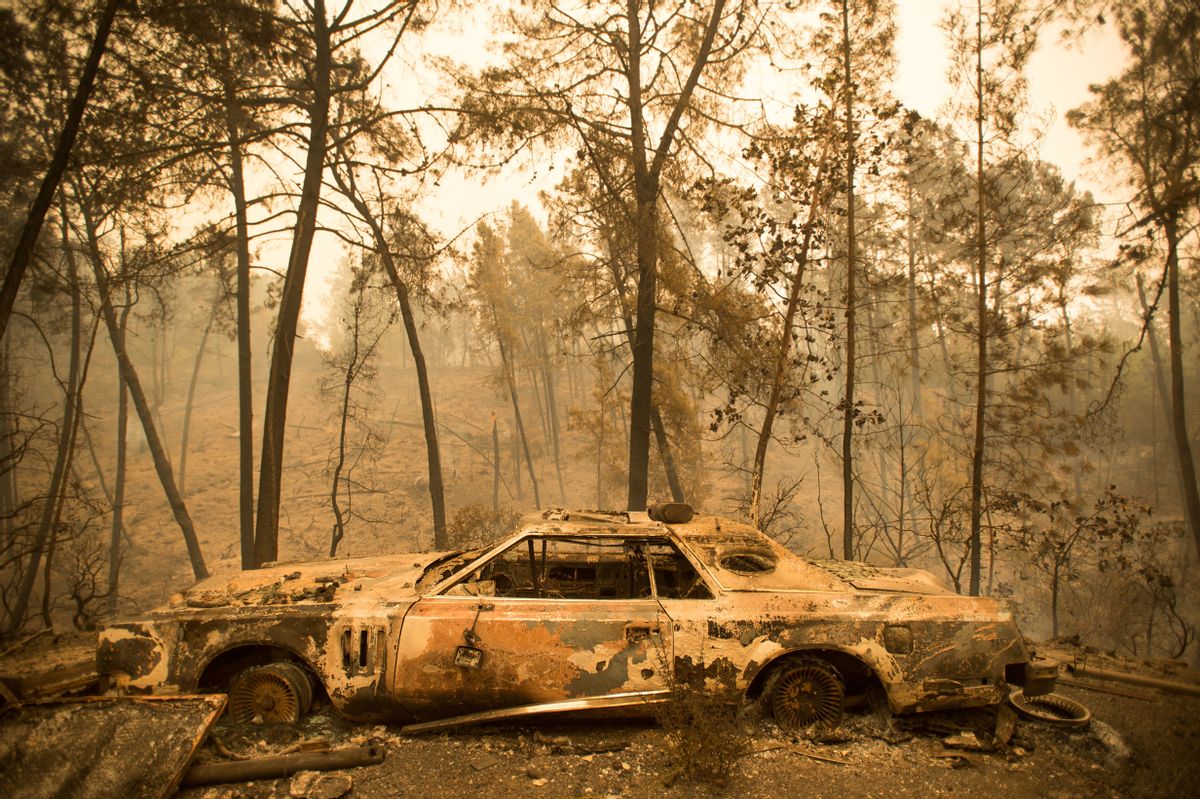 A vintage car rests in a driveway after the Loma fire burned through Loma Chiquita Road near Morgan Hill, Calif., on Wednesday, Sept. 28, 2016. A heat wave stifling drought-stricken California has worsened a wildfire that burned some buildings and forced people from their homes. (AP Photo/Noah Berger) (AP)
--

Prime-time cable news shows devoted more than three and a half times as much coverage to the NFL controversy that President Donald Trump stirred up as they did to historic wildfires in California, Media Matters found in an analysis of coverage the week after each incident began. Even when the NFL controversy was weeks old and the wildfires were at their peak, Fox News still devoted more than twice as much coverage to the Trump-sparked NFL story as to the fires.

On September 22, Trump kicked off a national controversy when he criticized NFL players who kneeled during pre-game national anthems to protest racism and police brutality. During a campaign rally in Alabama, Trump mused, “Wouldn’t you love to see one of these NFL owners, when somebody disrespects our flag, to say, ‘Get that son of a bitch off the field right now. Out! He’s fired. He’s fired!’” NFL players, coaches, and owners responded by staging more protests, and in subsequent days and weeks, Trump added fuel to the controversy by doubling down on his initial criticism and threatening to revoke the NFL’s non-profit status over the protests (even though the NFL had given up that non-profit status in 2015).

Just over two weeks after Trump's initial comments about the protests, California experienced the deadliestwildfires in the state’s history. Beginning on October 8, wildfires spread across Northern California in what the California Department of Forestry and Fire Protection (CAL FIRE) dubbed the October Fire Siege. Accordingto CAL FIRE, "there were 21 major wildfires that ... burned over 245,000 acres, ... forced 100,000 to evacuate, destroyed an estimated 6,900 structures," and killed 42 people. Estimates of the fires’ damage are as high as $6 billion, making them likely to rank among the most expensive natural disasters in California history.

From September 25 to September 29, prime-time cable news shows aired a combined 136 segments about the NFL controversy, with CNN, MSNBC, and Fox News airing 62, 28, and 46 segments, respectively.

By comparison, prime-time cable news shows devoted significantly less coverage to the California wildfires during the first week of coverage of the October Fire Siege. From October 9 to October 13, the prime-time cable shows aired a combined 38 segments on the fires, with CNN, MSNBC, and Fox News airing 19, nine, and 10 segments, respectively. The NFL controversy got 358 percent more coverage -- more than three and a half times as much. 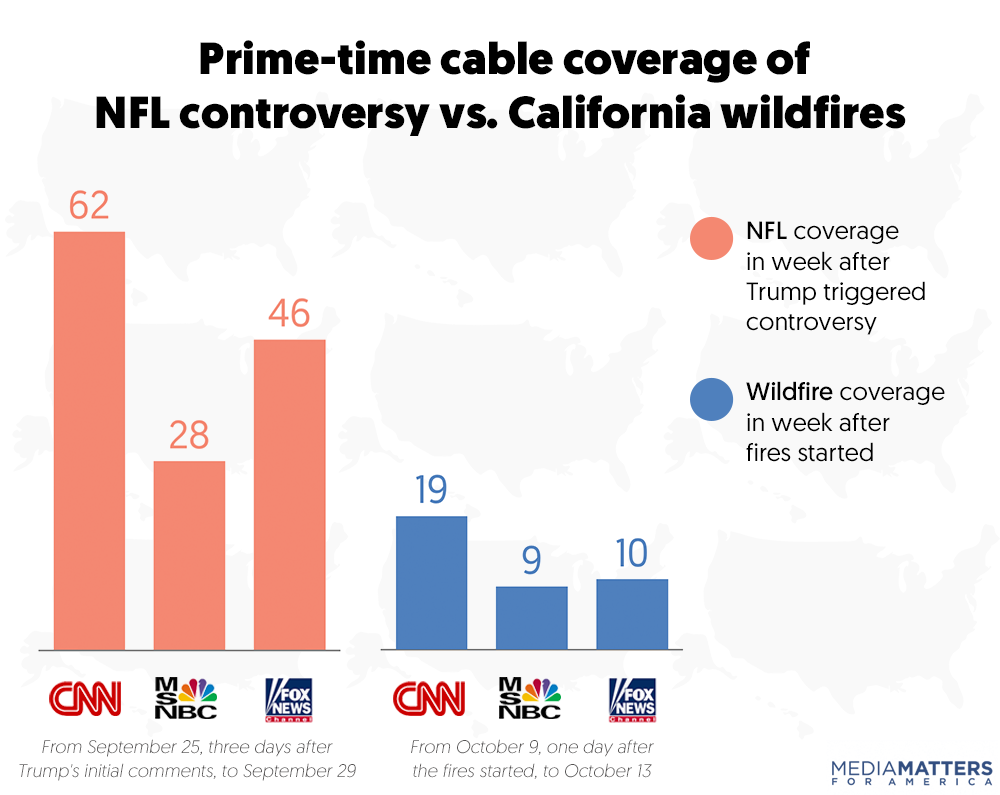 Media Matters also compared coverage of the two different stories during the same week, October 9-13, starting one day after the wildfires began and 17 days after Trump’s first NFL comments. Even during this period, when the wildfires were most destructive and the NFL controversy was more than two weeks old, Fox News’ prime-time shows still devoted more than twice as many segments to the NFL controversy as they did to the fires -- 22 versus 10. CNN and MSNBC, however, both aired more segments about the wildfires during this week. 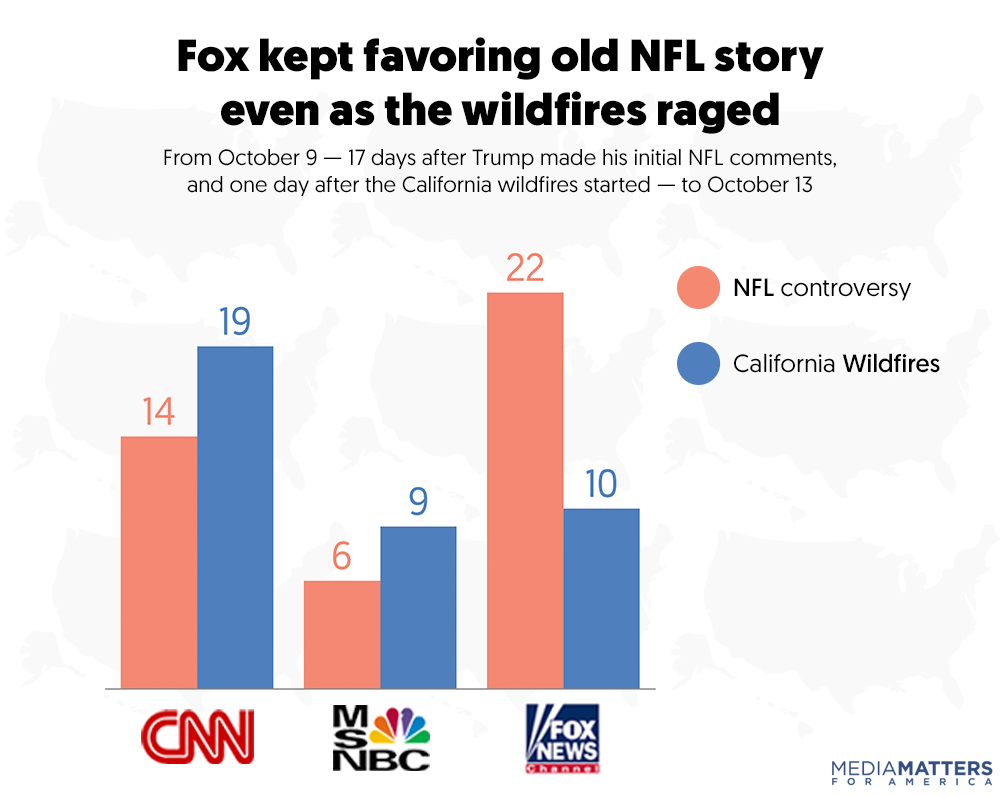 Cable news’ tendency to focus on Trump's controversial comments and tweets rather than other news that directly affects viewers' lives is unfortunately nothing new  (The NFL players’ protests raise important concerns about racism and police brutality, but Trump’s outbursts did not help address those issues.). Cable news networks have been more than willing to sacrifice substantive news stories for anything Trump-related because coverage of the president and his contentious statements has brought them record profits and viewershipnumbers. But the fact that coverage of a Trump-triggered controversy going into its third week can still compete with and even exceed coverage of historically devastating wildfires puts a fine point on just how bad the problem is.

We defined “segments” as instances where more than one individual discussed either topic during a panel discussion, or when a host or correspondent mentioned either topic as part of a news brief or headline rundown. Our analysis excluded teasers and passing mentions where a speaker mentioned either the NFL controversy or the California wildfires without any other speaker in the segment engaging.