Lena Olin plays the title role in “Maya Dardel,” a poet with plans to go out with a bang

A famous poet solicits talented young strivers looking for an heir to her fortune; she has very specific criterion 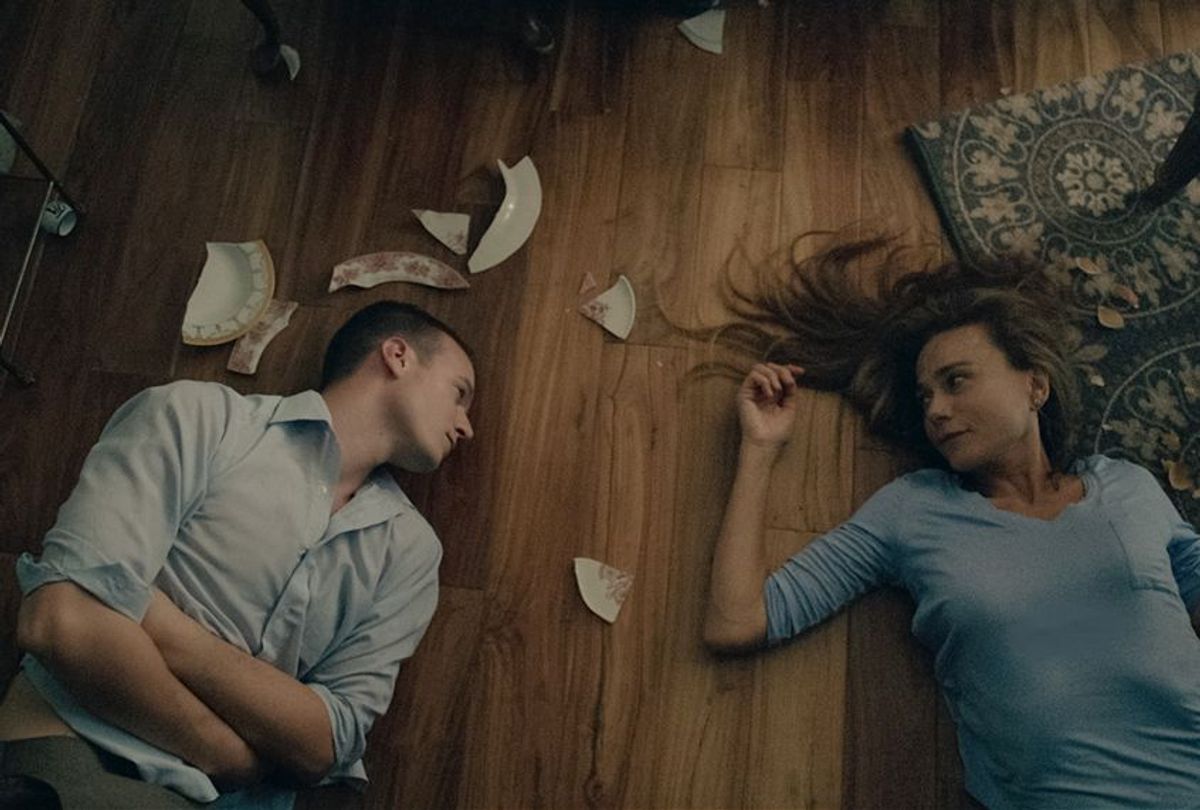 The slinky Swedish actress Lena Olin first captured American audience’s attention in 1988 as Sabina in “The Unbearable Lightness of Being.” The following year, she snagged an Oscar nomination for her role in “Enemies: A Love Story.” For some viewers, however, Olin will forever be associated with Mona, the ferocious Russian gangster from 1995’s “Romeo Is Bleeding.” A scene where Olin wraps her legs around Gary Oldman’s head while he’s driving (she’s handcuffed in the back) is pretty spectacular.

Olin has worked consistently since “Bleeding,” but her new film “Maya Dardel,” provides her with another big, juicy, memorable role. She plays the title character, a famous poet who announces on NPR in her husky, sexy voice, that she is going to kill herself. She invites male poets to contact her through her agent to become the heir and executor of her estate. While several young men apply — and she specifically asks for men and requires them to perform oral sex — the pool narrows down to two contenders: Ansel (Nathan Keyes), who is sensitive and artistic, and Paul (Alexander Koch), a sexy and passionate lover but whose talent and manners are lacking.

On the phone from Sweden, where she is rehearsing a play, the actress spoke with Salon about playing Maya Dardel.

Let me start with a question Maya asks one of her men: With extreme candor, tell me, what do you think of your performance?

[LAUGHS] It’s really hard to tell with any performance as you watch it. There are so many things that hit you when you watch yourself. It takes two or three times before I can say what I think. She’s such an extreme character. When I first saw the film, I was struck by how cruel she is. You enter the character without judging. So when I watched it, I was taken by how cruel she was.

Why do I play cruel characters?

As a poet and writer, Maya is a “culture creator.” As an actress you create culture. What are your observations on creating art?

I think I go by instinct when I choose a project. I’m doing a play in Stockholm now, and it’s been a while since I’ve done a play. Doing rehearsals in theater is not like making a film, which has a faster pace. We did weeks of rehearsal in the theater, and it struck me how completely detached I was from the intellectual process. The director explains exactly what he wants. He has that tool to paint you a path, and that makes it easy. Some directors have an intellectual approach, and I appreciate that, but I have no way of doing that myself. It’s basically instinct in my case.

Maya talks about denial vs. mortality, having purpose vs. work in decline. What are your thoughts on this topic?

I think luckily, probably, for writers, if you write fiction or poetry, and for actors, the older you get, in a best case scenario, you get better, because you’ve lived longer and had more experiences.

Zack [Cotler, the film’s co-writer/co-director] is a young guy, but he created Maya as someone who is very intelligent and very aware. There’s a truth that sometimes [talent] declines. Great film directors blow you away and then they dry out and then they come back.

Age comes with decline from the outside for actors in America. The insides, maybe not. I do have to believe that as we get older we’re getting better! I can’t stand the other way around.

On that same note, I think Maya is disarmed a bit by her own self-contempt; the madness that comes with genius, the suffering for one’s art. How do you cope with the ups and downs of life and a career in the arts?

Life in the arts isn’t the glamour that people think it is. This play I’m doing and working with a man who is known for being demanding and challenging to work with. I wonder why do I put myself through this? And other times, I get why I’m putting myself through this. You have to work harder when someone gives you appreciation. That’s a discipline you have to have.

If it’s not a spoiler to ask: How did you think Maya would kill herself?

I’m not sure. I think she’d choose a pleasant way. Drink a lot of champagne. She’s concerned about how the world sees her. It would be spectacular and colorful.

Ingmar Bergman has been dead for a while — and because I worked with him —  I get questions about letters he wrote to me when I was in my 20s. He orchestrated the whole thing. I think he was careful in his way, creating the way the world would see him, his writing and his art even after his death.

Let me ask another question one of the men in the film asks Maya: How am I doing so far?

There is a fearlessness in your performances. Can you talk about this aspect of being disarming?

I think that what I’m interested in — and this journey all actors are on — is what is truly human and catching that something. Very rarely do we say what we mean or react in the way we should react. People surprise us, and it rings true.

When I was in drama school, I was told to get on the subway and fantasize about people — are they married, do they have kids, are they happy? I’ve been doing this since I was two years old! People who know me well wonder why I’m so curious. It’s like an addiction. Those are the moments I’m looking for in my performance. It’s hard to plan. As you’re doing it, something comes along that you don’t expect. You’re supposed to be happy and excited, and a fear comes through you. Those moments are interesting to watch on screen and in life too. It’s when you feel completely present. You try to create something, and it is when things just happen that you catch the moment.

Maya plays up her sensuality and talks about the sex appeal of older women. You’ve expressed sensuality in many of your films?

I think it’s such an important part of my characters. But I’m always surprised after, how much the sensuality comes through. It’s my connection with someone else. Maya has a need to feel life and power, and a bit of desperation in her longing — that’s how she used these men.

I see the film as a power struggle between Maya and her suitors, Ansel and Paul. What do you think Maya sees in these young men?

She tries to create a power struggle between the men, but maybe it is more about her and the men. I think what she’s really looking for, and what touches her, is the raw talent. When she sees and recognizes that it excites her and kills her at the same time, because her own brilliance is in decline.

I really like the friendship between Leonora (Rosanna Arquette) and Maya. What can you say about Maya’s interaction with women?

It was a really bizarre compound up in the mountains. When Rosanna came along — and it was a challenging character for her — we immediately bonded. We got a hold of each other in a wonderful way. Our scenes were extremely non-competitive. We could breathe with each other. I’d never met Rosanna but she was extraordinary. I want to work with her again.

Maya describes what she likes to read. What do you read? Do you have a favorite poet?

The Swedish poet who won the Nobel Prize, Tomas Tranströmer. I love his poetry. I grew up with Swedish poetry. We read poetry in school. Teenagers read poetry and it’s a big part of our schooling.

It’s Zack’s poetry that I read as Maya — he would talk about what he meant with it. But in my heart, I have a tough time really appreciating American poets.

Maya is concerned with legacy. What do you think your legacy will be?

That’s interesting. I’m grateful for films. I grew up in the theater, and my parents were actors. They were very snobby towards film. I did theater before I got the opportunity to work with film and TV, and what’s so rewarding is that there’s something that will stay and be there. There’s something exciting — both good and bad — about that.