Texas House Speaker Joe Straus kept the Republican lunatic fringe at bay for a while, but he's finally had enough 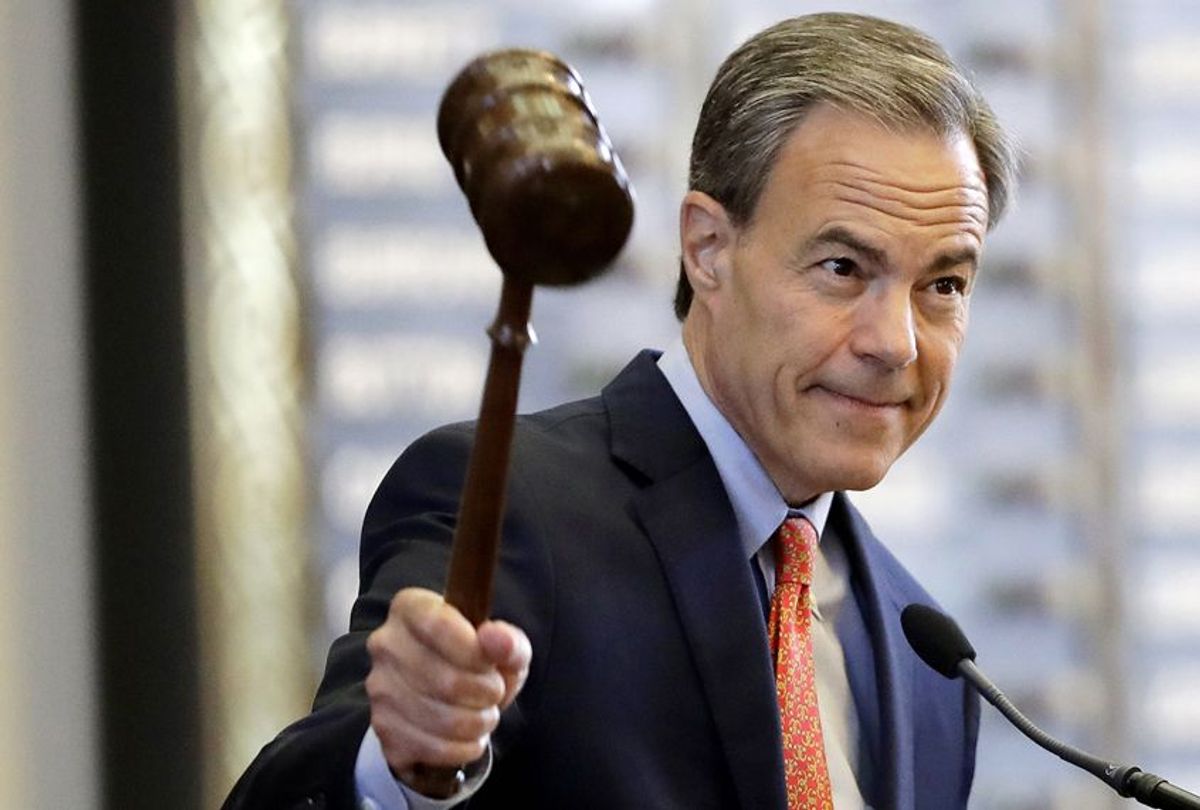 While the national media was breathlessly covering the stories of two national Republicans — Sen. Jeff Flake and Sen. Bob Corker — throwing in the towel in the face of Trumpism, a potentially more serious version of the same story is playing out in Texas. The speaker of the Texas House of Representatives, Republican Joe Straus, announced on Wednesday that he would not run for re-election.

Straus may be just a state official, but his decision could end up having more real-world consequences than those of Flake or Corker. Straus may not be big on self-congratulatory speeches, but he was someone who actually used his political power, on occasion, to stymie the agenda of the Trumpian right. (Flake, in contrast, voted with Donald Trump's agenda 90 percent of the time.) Straus, who represents the country-club wing of the Republican Party even as the yahoos started to take over, "stopped a metric ton of junk legislation that would have passed with a different speaker," according to Texas Observer writer Christopher Hooks.

Straus went on a rampage against some of the loonier items demanded by Gov. Greg Abbott and Lt. Gov. Dan Patrick during a legislative special session called over the summer. Those included a bill forcing transgender children to use the wrong bathrooms, a bill stripping even more funding from Planned Parenthood and a bill meant to redirect money from public schools to private schools that teach that Jesus rode a dinosaur.

Unfortunately for Straus, willingness to draw the line on at least some far-right agenda items led many in the media to characterize him as a moderate. That's not helpful branding within the Republican Party.

"In a Blow to Moderate Wing of GOP, Powerful Texas Republican to Retire," reads an NPR headline.

"What happens when GOP moderates abandon the field?" asks a headline at the Fort Worth Star-Telegram.

"When you hear that this speaker is a moderate or a liberal, keep in mind that our 'show me your papers' immigration law, the most restrictive anti-abortion law in the nation -- famously filibustered by Wendy Davis in 2013 -- and a restrictive Voter ID law were all passed under Straus' leadership of the Texas House," Scott Braddock of the Quorum Report, an independent political newsletter, told Salon. "He just vehemently disagrees with Lt. Gov. Dan Patrick's reckless style of governing."

"Unlike some national Republicans recently, Straus has opposed reckless governing all along," Braddock added. "It's not a new thing he's doing as he chooses to retire."

It's easy to see why folks get confused around this and start mistaking Straus for a moderate. The Trumpian flank of the party, led by Patrick, has been waging an all-out war on the more rational Straus wing. A shadowy group of oilmen and religious right hardliners has spent millions of dollars, much of it dark money, trying to run Straus and those like him, who are occasionally willing to set limits on right-wing nuttery, out of the party.

There are certainly some political differences between Straus and those who bedevil him — to his credit, Straus seemed sincerely put off by the idea of legally bullying trans kids by forcing them to use the wrong bathroom. But as with the larger battle between Trump-Bannon Republicans and "establishment" Republicans, the differences are more about aesthetics and conduct than about ideology. Ultimately, Straus' detractors wanted to spend more energy on culture-war issues, while he was more interested on the business to keep the state from collapsing.

So much of conservatism these days is about competitive performance, with politicians and pundits vying to see who can be the biggest braying jackass. The battle royale of Flake and Corker versus Trump, for instance, has almost nothing to do with policy, and everything to do with Flake and Corker realizing there was no longer any point in pretending to support a president they found so obnoxious, when they were probably going to lose their re-election campaigns anyway. Everyone on the Republican side of the aisle wants tax cuts for the rich, but the Jeff Flakes of the world would prefer to get those with fewer embarrassing Twitter battles and less obvious racism.

That isn't to say this struggle is inconsequential, either in Texas or in the nation at large. Trump's antics are dangerous and demoralizing and could lead us into a pointless war caused by his own carelessness. And the loss of Straus, a staunch conservative but not a screeching nut, could cause real problems for the second-largest state in the country.

"When considering the question of why Texas has fared generally better than similarly red states like Louisiana and Kansas, which are on fire, Straus and the conditions that created Straus are a significant part of the answer," Hooks writes at the Texas Observer. "He’s the last person in state government who seems to care about governing as a concept."

Braddock, on the other hand, feels that Straus might be making the move necessary to keep the monkeys from completely taking over the zoo.

"Privately, many Republican members who will surely miss Straus’ leadership will not miss the injection of his name into their races," he wrote at the Quorum Report. By removing himself as a hate object for the populists, Braddock argues, Straus may have created a context where "a responsible Republican has a shot at holding the gavel."

We can all hope so, for the state of Texas. But Straus' departure is another troubling sign for the future of the Republican Party. Even being perceived as a reasonable person beholden to political realities is increasingly fatal to the reputation of a Republican politician, at least among people who vote for Republicans. The country-club Republican, who has right-wing politics but still has both feet on the ground, is a dying breed.