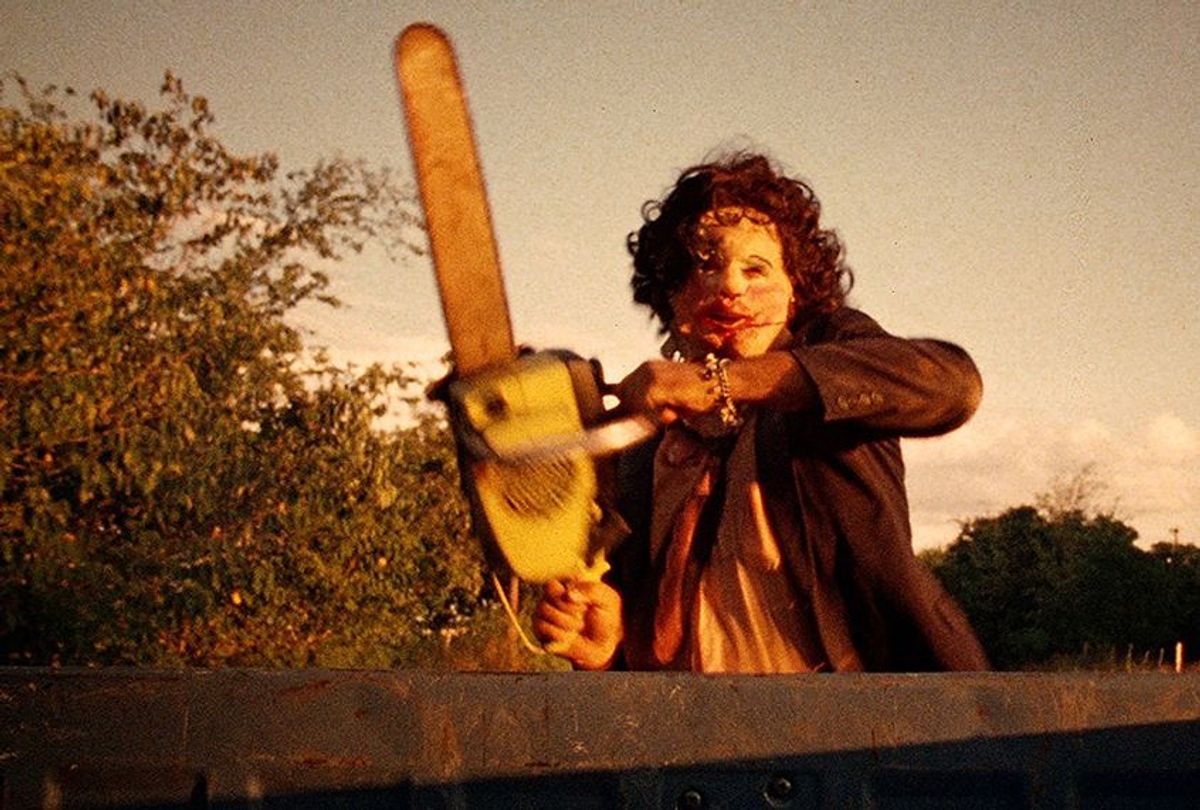 Horror films are particularly good places for social commentary. I suspect the reason for this is that, when you peel away the jump scares and gore, horror appeals to us because it allows us to confront our ultimate fear, one from which none of us can escape — death.

Once a human being can appreciate their fear of death, of course, it goes without saying that the door has been opened to understanding the many, many other deep fears that come with being part of this life. Which is why we have such horror classics as . . .

1. Invasion of the Body Snatchers (1956): Film scholars have long debated whether this Don Siegel classic is a satire about McCarthyism or an attempt to promote the very Red-baiting that made McCarthyism possible. After all, a story about aliens who pretend to be regular human beings but are truly double-agents could be seen as an allegory for supposed Communist subversion or as a way of skewering 1950s-era social conformity and fearmongering (the pod people themselves are emotionless husks of human beings). Either way, "Invasion of the Body Snatchers" deserves to be seen, even if its ultimate meaning remains controversial to this day.

2. The Texas Chainsaw Massacre (1974): This movie is about vegetarianism. In fact, its vegetarian themes are so obvious that it's hard to believe people took so long to pick up on this. Even if you didn't have director/co-writer Tobe Hooper outright saying that the movie is "about meat," think of the first act monologue in which one character graphically describes how animals are slaughtered. Throughout the rest of the movie, the major characters are killed in ways that are reminiscent of slaughterhouses (hammer to the head, meathooks). And, of course, the fate of the murdered characters is to be cannibalistically devoured.

3. Dawn of the Dead (1979): "It is gruesome, sickening, disgusting, violent, brutal and appalling," wrote Roger Ebert in his original review. "It is also (excuse me for a second while I find my other list) brilliantly crafted, funny, droll, and savagely merciless in its satiric view of the American consumer society."

I couldn't have put it better, but I'll try to add a point here: What makes this movie such a great commentary on consumerism isn't simply that the zombies shuffling around that mall don't look very different from real-life mallgoers, or that the film's climax involves two bloodthirsty gangs fighting for the right to own the remaining stores. My favorite scene is an early montage in which the four protagonists, having safely turned the mall into a fortress, try to escape from the terror of their new reality by shopping. It's a fun, light-hearted sequence that illustrates how vices are often fueled by desperate human needs.

4. The Stuff (1985): Much as I adore Clint "Ice Cream Man" Howard, that flick has nothing in the way of sweet tooth-related terror when compared to "The Stuff." If you distrust corporations or are disturbed by the long-term implications of GMOs, then this is the movie for you. Like "Dawn of the Dead," it also takes stabs at consumerism, but the real horror here comes from the ease with which the major characters simply trust a big business that offers them a product which common sense should tell them is too good to be true. Tastes delicious and has zero calories? If that was real, it wouldn't be horror — it would be fantasy.

5. Nightmare on Elm Street 2: Freddy's Revenge (1985): The backstory behind this film is pretty rough to read about. LGBT star Mark Patton was basically outed by the film's obvious metaphors for homosexuality — Freddy Krueger wants to possess the so-called "final girl" Jesse Walsh, prompting lines like "He’s inside me and he wants to take me again!" and "Something is trying to get inside my body," and there is of course the shower death scene — and it's clear that the experience ruined his acting career. Yet if you want to understand the discomfort that '80s Hollywood had with homosexuality, "Nightmare on Elm Street 2: Freddy's Revenge" is a fascinating gem. It works quite well as a horror film in its own right and is surprisingly bold in some of the creative choices that it makes in order to add layers to its narrative.

6. They Live (1988): It's pretty hard for a leftist to NOT love "They Live." The movie's premise is that a homeless man finds a pair of mysterious sunglasses and, when putting them on, discovers that they allow him to see the "real" world which lurks beneath our own. Seemingly ordinary people are revealed to actually be hideous aliens, our system of currency and culture is seen as a method used by the aliens to enslave humanity and humanity itself is revealed to be nothing more than mindless, manipulated sheep. Released during the final full year of Ronald Reagan's presidency, the '80s aesthetic actually makes "They Live" more compelling — it couldn't have been set during a more appropriate decade.

7. Candyman (1992): Growing up, I remember being told that if you said "Bloody Mary" into a mirror five times, an evil ghost would magically appear and murder you. I never had the guts to test that theory, but "Candyman" follows a very similar premise — only the titular Candyman himself is a victim of racism, and the film's primary setting is Chicago's notorious Cabrini-Green housing project. Of all the villains featured in this article, none have a more sympathetic backstory than Candyman, and few performances are as bone-chillingly powerful as Tony Todd in the lead role.

8. Ginger Snaps (2000): There is something deliciously wicked about a horror film that takes male predatory behavior toward women and literally inverts it. Ginger Snaps tells the story of two socially ostracized sisters, Ginger and Brigitte, whose early struggles with puberty take a violent turn when the elder of the two is attacked by a werewolf. Much of the commentary here serves as metaphors for puberty, but there are particularly clever plot twists in which the men who hunt for Ginger's flesh (sexually speaking) find that she is hunting for their flesh as well (because she's a werewolf whose intentions are, well, less sexual).

What makes "Saw VI" such a masterpiece — and yes, I just referred to a "Saw" film as a masterpiece, which I'm sure will cause many film snobs to want to revoke my critic card — is that its plot involves health insurance executives being forced to play the same life-and-death games that they regularly force on their customers. Released at a time when Obamacare's right-wing critics claimed that the law would impose "death panels," the Jigsaw Killer in "Saw VI" forces the main character to make literally life-and-death choices for other human beings using the same cold logic he employed bloodlessly as a business leader. The best of these is a carousel trap in which one character is forced to choose two of six people to live by weighing the "value" of their lives, not dissimilar at all from what health insurance companies do every day. And when one character realizes he is going to die, he has a poignant moment in which he demands that the man who has sentenced him to death at the very least have the decency to look him in the eyes before he goes.

It's a level of moral accountability that most insurance companies avoid to this day.

10. ParaNorman (2012): Without giving away too much of the plot, this is a movie in which the ultimate bad guys aren't the zombies or witches or ghosts that move the story forward. It's the emotion of fear itself, one that causes human beings to act in distinctly inhumane ways when confronted with the unknown. This would be a profound message in any film, but it's especially daring to put it in a motion picture aimed at children. Yet the movie's message is both subtle and effective, and it even contains a bonus message at the end, when a character is revealed to be gay in a twist where the punchline is on the audience for assuming he would be straight.