Why Manafort will be pressured to testify against Trump

Trump's bag man is sitting on a volcano of incriminating information 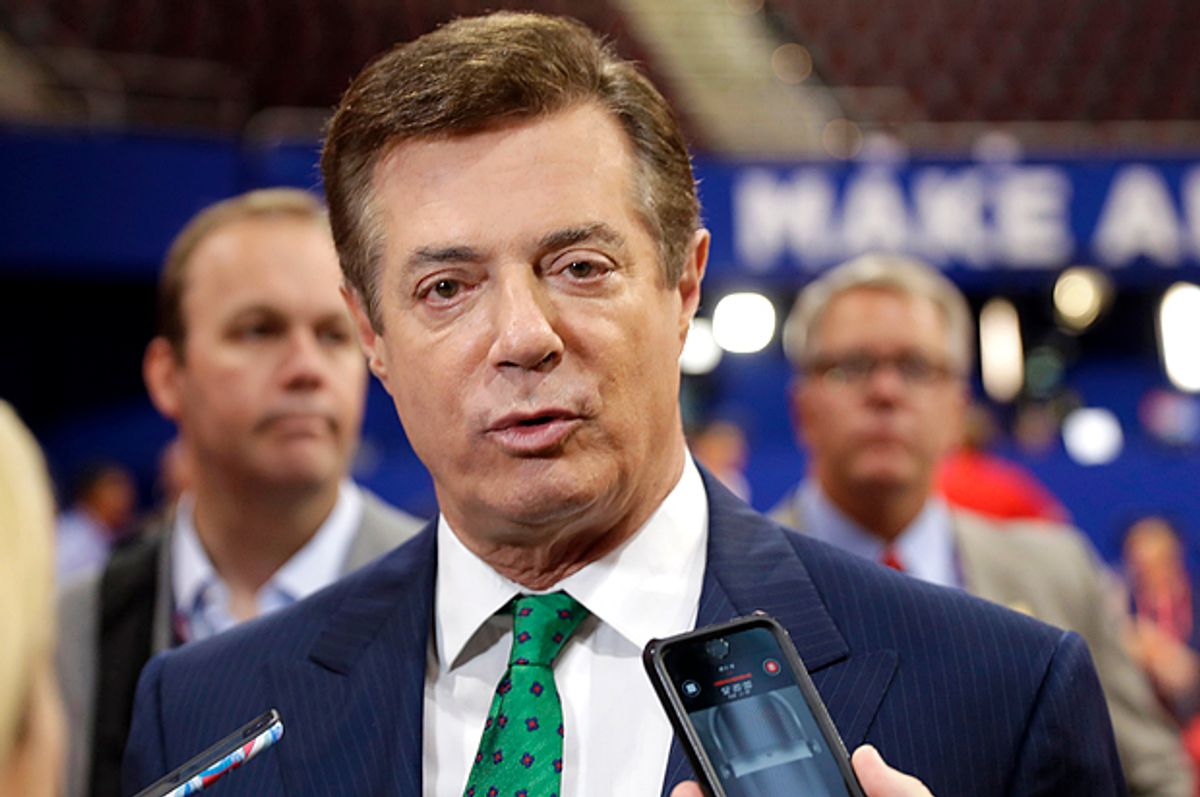 Manafort, a veteran Republican political operative in Washington, played a key role in Trump’s rise to power. He served as middleman between the Trump campaign and the Russian government in 2015 and 2016. The charges against him and a business partner, Rick Gates, bring allegations of criminal activity into Trump’s inner circle for the first time.

The charges strengthen the notion that Trump collaborated with Russia to gain the presidency and give lie Trump’s claim that the Russa investigation is a“hoax.”More than any other person who could have been indicted, Manafort can testify about Trump’s Russia connections.

Since the 1980s Manafort has amassed a fortune by representing dictators and human rights abusers shunned by other Washington political consultants. An NBC News investigation found Manafort had done $60 million worth of business with Oleg Deripaska, a billionaire with close ties to the Kremlin over the past decade, according to financial documents filed in Cyprus and the Cayman Islands.

Manafort joined Trump’s campaign at a formative moment in the spring of 2016 as Trump vanquished his Republican rivals and turned his attention to Democratic candidate Hillary Clinton. He became Trump’s chief strategist and a channel that Trump and his entourage to used to communicate, and possibly, coordinate with President Vladimir Putin.

In June 2016 when a Russian attorney approached the Trump campaign with an offer of dirt on Democratic nominee Hillary Clinton, the meeting was held in Manafort's office. The purpose of the meeting, according to an email made public by Donald Trump Jr. was “part of Russia and its government's support for Mr. Trump,"

When the meeting was first reported in June 2017, Trump dictated a misleading statement for his son which asserted, falsely, that the meeting concerned a Russian law barring Americans from adopting Russian orphans.

The charges against Manafort concern alleged tax fraud and money laundering, not any actions related to the 2016 campaign, but they will increased pressure on Manafort to become a witness against his former boss. Mueller is known to be investigating the June 2016 meeting as part of a possible obstruction of justice case.

Manafort has much to explain. In July 2016, while serving as campaign manager, he offered to give a private briefing on the campaign to Deripaska.

“If he needs private briefings we can accommodate,” Manafort wrote in the July 7, 2016, email, portions of which were read to the Washington Post along with other Manafort correspondence from that time.
Report Advertisement

Deripaska, listed as the ninth-richest man in the world in 2008, had a net worth of $28 billion, had a penchant for renting the attention of high-profile Western politicians, including Sen. John McCain (R-Ariz.).

Trump fired Manafort in August after reports that he received more than $12 million in undisclosed payments from Viktor F. Yanukovych, the former Ukrainian president and a pro-Russia politician. But Gates, his business partner and protégé, continued to play a role, according to the Post. Gates directed the inauguration plans, including fundraising, under Tom Barrack, Trump’s close friend and adviser.

So far Manafort has not been cooperating with investigators. FBI agents working for Mueller raided Manafort’s home in Alexandria in late July, armed with a search warrant that allowed them to enter at dawn without warning the occupants. Such an invasive search is only allowed after prosecutors have persuaded a federal judge that they have evidence of a crime and they have reasonable concern that key evidence could be destroyed or withheld.

Now facing a criminal trial that might result in a long prison term, Manafort must choose between his loyalty to Trump and his own self-interest. The evidence has culminated in charges of criminal activity in the entourage of the president of the United States.

Jefferson Morley is AlterNet's Washington correspondent. He is the author of the forthcoming biography "The Ghost: The Secret Life of CIA Spymaster James Jesus Angleton" (St. Martin's Press, October 2017) and "Snow-Storm in August: Washington City, Francis Scott Key and the Forgotten Race Riot of 1835."