14 Halloween costumes not to wear

This is the no-go zone 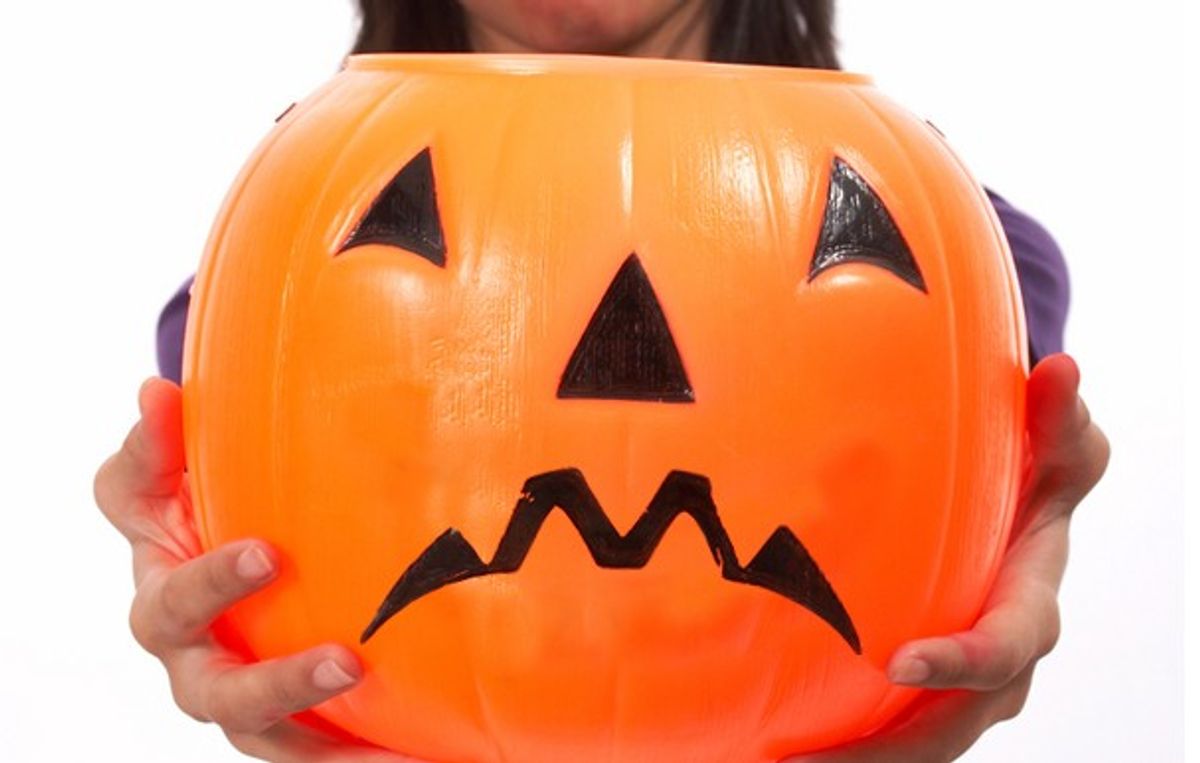 Let's look back at Halloween 2013. That was the year this picture was taken, and went viral, all over the internet.

The person who posted it was Caitlin Cimeno, the delighted-looking woman in the middle. William Filene, the guy on the left, dressed up as Trayvon Martin—a boy who was murdered—including the bloody bullet hole in his hoodie and full blackface. Greg Cimeno, on the right—the guy making a gun with his hand and pointing it at the other guy’s head—is supposed to be George Zimmerman. These three thought this was so uproariously funny that they didn’t just put on the costumes, they took a picture and posted it on social media for the world to see. (This is part of why no one should be surprised Trump got elected!)

They weren't the first people, and won't be the last, to have their racism or general awfulness proven by their choice of Halloween costume. Every year, someone inevitably decides it’s a good idea to dress up as an entire race for the day. (And that day often isn't even Halloween, amiright racist white people?) Still others drag their kids into this whole mess: this little suicide bomber and tiny Hitler can’t be held accountable for what they’re wearing. And that Sexy Donald Trump costume is back again this year, though I prefer this more life-like horrorshow.

So here’s a list of costumes you should be sure to avoid this year, with brief insights on why. And if you're sick of all this PC stuff blah, blah, liberty something, something, free speech, remember, no one is stopping you from wearing anything and you are not a victim. If you want to be an asshole, be an asshole! Just don’t pretend not to know you’re acting like one.

So many problems here. As a general rule, treating an entire group of marginalized people as a costume you can put on and take off is reductive, offensive and dumb. Reducing people to stereotypes and caricatures, which is what this kind of costume is all about, is pretty much the textbook definition of racism. It’s never okay to appropriate Native American icons and signifiers without regard to context or history, whether it’s for Halloween or Coachella. What you consider a costume may be sacred or deeply meaningful to someone else. Hopefully, you’d rather not be party to continuing our long history of devaluing Native American traditions and beliefs.

As a capper, here’s a video of Native American people trying on “Indian” costumes and explaining why it’s always a terrible idea.

It was difficult to choose an example here, with so many ridiculous choices. Like this one, or this one, or for god’s sake this one. My only question is, who came up with these costumes and how soon can they start working for the Trump administration?

Actually, this is listed as a “Sexy Arab” costume, which somehow makes it worse. Anyway, don’t.

The official name of this costume is “Dragon Lady Geisha.” Who knew before this moment that so many offensive and damaging cultural stereotypes could be sandwiched into one offensive and damaging costume name? (I’m almost impressed, in the worst way.) Putting a dragon on a child’s satin robe, belting it and then calling it anything but “Lazy Orientalism With Stilettos” should be punishable by a fine.

There’s no one who doesn’t know blackface is offensive at this point. It doesn’t matter if you’re doing some old-school Al Jolson-style blackface or some modern-day blackface you think is an homage to a black actor, musician or character you love from TV. There have been a million articles and discussions about why this is true, and if you’re feeling confused at this point, it's 2017 and no you are not. If you insist on wearing blackface, you’re an asshole. If you persist in arguing that you should be able to wear blackface because it isn’t racist when you wear it, you're an asshole. If you wear blackface and pretend not to get it: asshole. There are no more options. (Also, nods to blackface, like this or this, count.

Just no. To all of this.

There is zero need to show up to the party as a sexualized child. If you insist on doing some version of "sexy" plus "stupid," why not go as a sexy slice of pizza or a sexy piece of poop? (Fine, "sexy poop emoji." Whatever.)

This is why we can't ever have nice things. I don't even think this is offensive, just another example of a society all too willing to enjoy the unseasonably balmy weather as hell heats to a boiling point. "Spread all the alternative facts," the seller urges, because we are doomed.

9. Anyone this year who made news just for being awful, from Harvey Weinstein to Bill O'Reilly to any Breitbart employee or Trump staffer. Or Trump offspring. Or Trump spouse.

The world does not need more of these people. Even for one night.

On any given night, there are nearly 600,000 people living on the street, and more than 200,000 of them are in families, which is incredibly unfunny.

The hair on this Trump costume doesn't even look close to the real thing.

In the current atmosphere, with a white supremacist president, his racist administration and actual neo-Nazis in the streets, now is no time to reduce a Holocaust victim to a costume. (The time for that is called "never.")

This costume should be renamed “racist frat boy.” Which can then be shortened to just “frat boy."