Unlike Vegas, Trump is politicizing the New York City attack — and getting it wrong 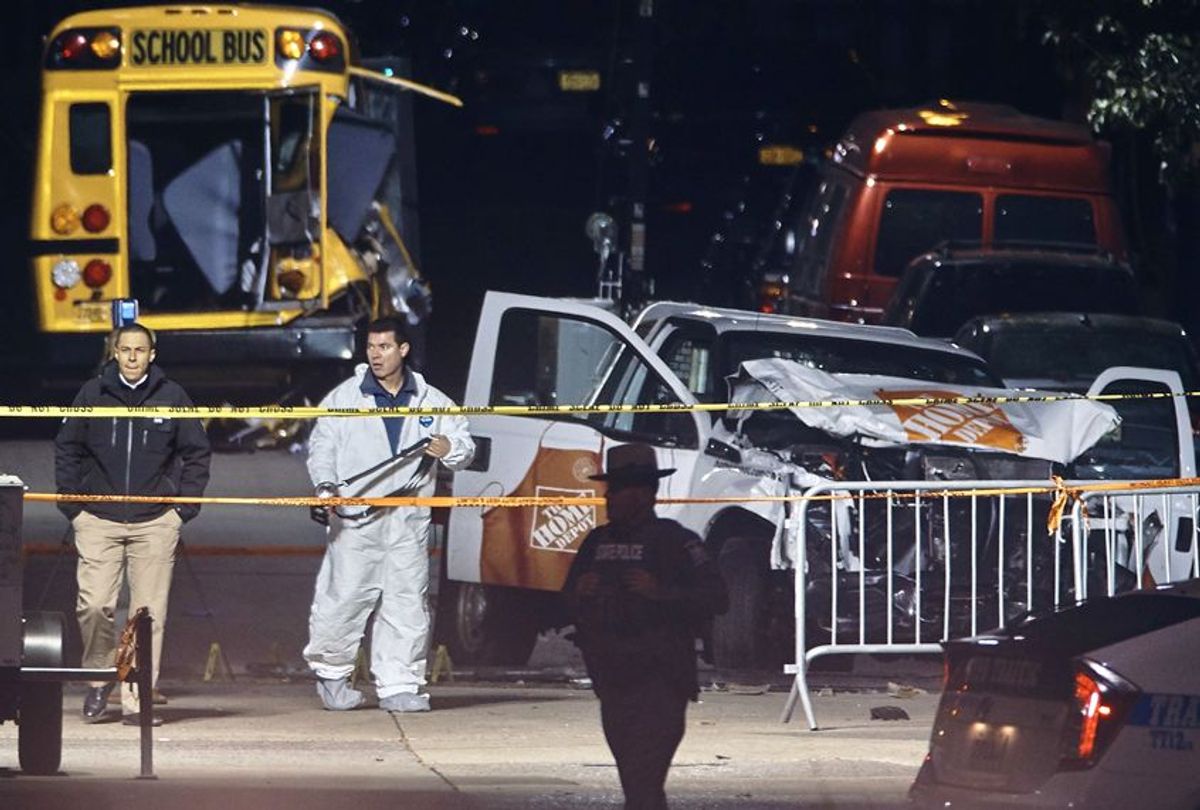 Police work near a damaged Home Depot truck after a motorist drove onto a bike path near the World Trade Center memorial, striking and killing several people, Nov. 1, 2017, in New York. (AP/Andres Kudacki)
--

President Donald Trump and other conservatives may have professed reluctance to "politicize" other mass shootings by mentioning gun control, but that didn't stop the president from jumping all over the New York City terrorist attack to call for more restrictive immigration policies.

Sayfullo Saipov, the 29-year-old Uzbek suspect in Monday's terrorist attack in New York City, came to the United States through the Diversity Visa Program, according to ABC News. The program is designed to increase immigration rates from countries that are comparatively lower by giving 55,000 green cards each year to people who are mainly from Africa or Eastern Europe, according to Newsweek. Applicants need to undergo two years of vetting, be free of any criminal background, contain at least a high school or equivalent level of education and possess at least two years of work experience within the last five years.

There have been multiple previous efforts from the right-wing to repeal the program, most recently when Sen. Tom Cotton, R-Ark., proposed the Reforming American Immigration for a Strong Economy Act. The White House supported that bill and said in a statement that the Diversity Visa lottery program was "outdated" and "serves questionable economic and humanitarian interests."

According to Anna O. Law, a political scientist and the author of "The Immigration Battle in American Courts," the right-wing opposition to the Diversity Visa Lottery misunderstands the complicated history of that legislation — one that has nothing to do with "political correctness," regardless of what Trump might want to believe.

In stark contrast to Trump's quickness at jumping on the New York City terrorist attack to promote an anti-immigration agenda, the president outright refused to acknowledge that the Las Vegas shooting was an appropriate time to begin discussing gun control.

"Today is a day for consoling the survivors and mourning those we lost. Our thoughts and prayers are certainly with all of those individuals. There’s a time and place for a political debate, but now is the time to unite as a country," Sarah Huckabee Sanders, Trump's press secretary, told reporters after the Las Vegas shooting.