NYC terror attack brings out the worst in Trump

The President dreams of Gitmo and the death penalty after a tragedy, showing his disdain for the rule of law 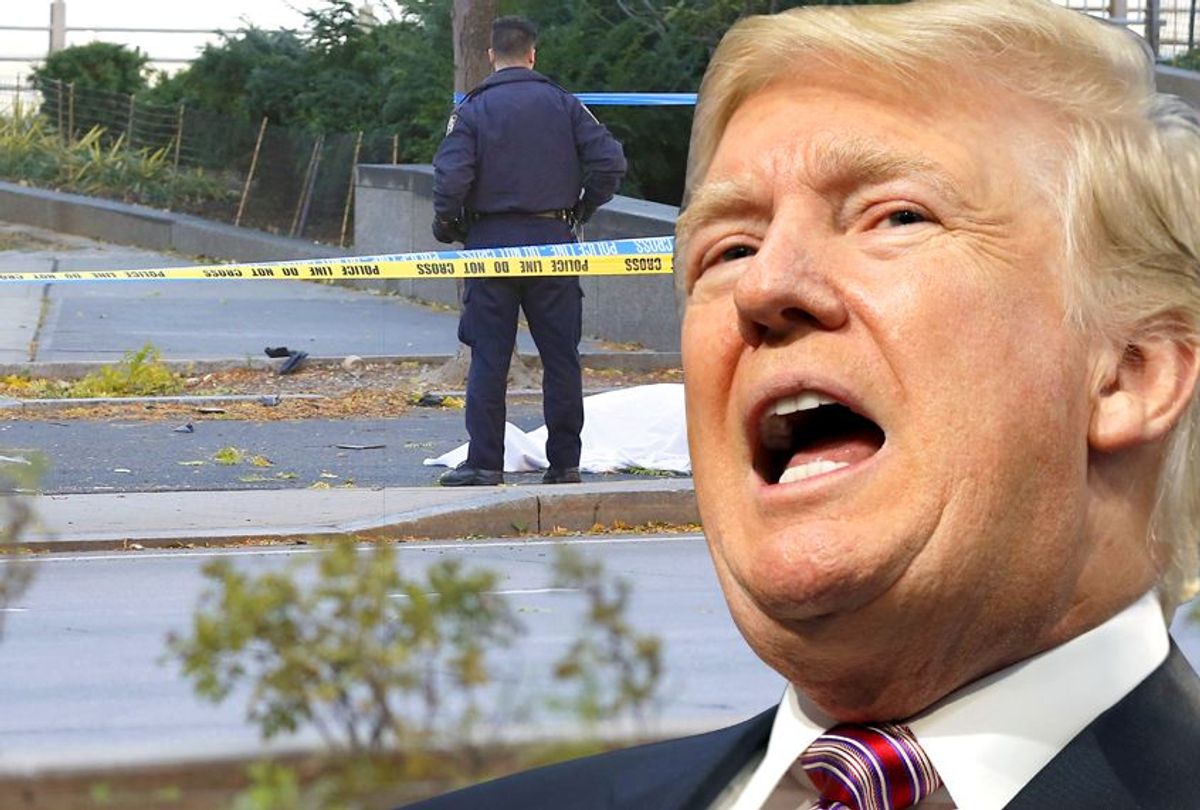 In the wake of this week’s terror attack in New York City that left 8 people dead, President Donald Trump did what we’ve come to expect of him — send tweets. Trump wasted no time criticizing immigration policies, calling for the death penalty, and wishing that he could send the suspect, Sayfullo Saipov, to Guantanamo Bay. In a separate statement made in front of reporters, Trump called the criminal justice system “a joke” and a “laughing stock," implying that it’s not adequate for trying terrorism cases.

Many have been quick to point out the hypocrisy of the White House considering that in the aftermath of the shooting in Las Vegas that left 58 people dead, press spokesperson Sarah Huckabee Sanders decried the politicization of the tragedy. The bigger problem with Trump’s tweets, however, is the substance. The president showed not only his ignorance about the facts, but also a disturbing lack of concern for constitutional principles.

On the issue of the death penalty, we have to keep in mind that a trial hasn’t even taken place yet.

“It’s important that the head of the executive branch, the President, those who are outside of the chain of command at the Justice Department do not interfere in the prosecution of the case,” Jamil Dakwar, the director of the ACLU’s Human Rights Program, said in a video interview with Salon. This could be used by the defense to argue that the suspect is not being treated fairly. “These kinds of issues should be dealt with due process and fair trial. It should be a speedy trial, but a fair trial. We can’t endorse what the president was suggesting — a summary trial," Dakwar continued.

Trump was not the only politician with dreams of using Gitmo, despite the extrajudicial nature of the prison and the dark mark it has left on America's human rights record.

“It’s a lawless place, it’s a dysfunctional and flawed military commission system that would never give justice to the victims," said Dakwar. No new prisoners have been sent to Guantanamo since 2008 and currently there are 41 detainees still held there. The President at least acknowledged in a tweet that military commissions take much longer than the federal system.

As for calling the federal system “a joke," Dakwar pointed out that in fact, many terrorism cases have been not only successful but overzealous. “It has handled over 600 terrorism cases, most of them with convictions. People are sentenced to long sentences, many of them could be contested on the fact that they are disproportionate to the actual crime," Dakwar said.

Americans are no strangers to letting fear over terrorism lead to government policies that erode civil liberties. So now, just as always, it’s important to keep things in perspective and know the facts.