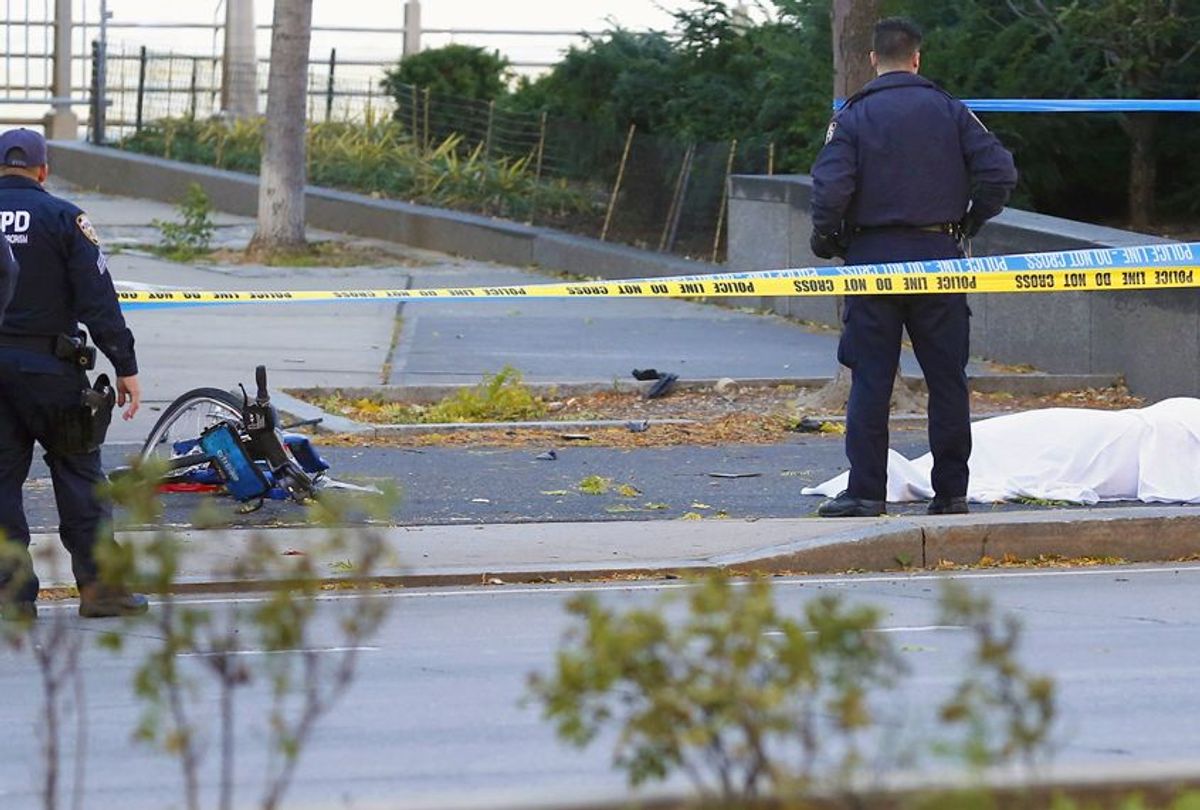 A New York Police Department officer stands next to a body under a white sheet near a mangled bike along a bike path, October 31, 2017 (AP/Bebeto Matthews)
--

Shortly after 3 p.m. on Tuesday afternoon near West Side Highway in Manhattan, a truck struck several people while driving down the bicycle lane, leaving as many as eight people dead, and roughly 16 injured, in what authorities are now calling a terrorist attack, according to multiple news reports.

"This is a tragedy of the greatest magnitude," New York Police Commissioner James P. O'Neill said during a press conference late on Tuesday afternoon.

NYPD Commissioner James O'Neill on incident in lower Manhattan: "This is a tragedy of the greatest magnitude" https://t.co/FRtLlUHUk0

New York Mayor Bill de Blasio confirmed on Tuesday afternoon that the authorities consider the incident a terrorist attack. "This was an act of terror, and a particularly cowardly act of terror," de Blasio said.

The vehicle also collided with a school bus from Stuyvesant High School, according to the New York Times. Early reports suggest that the driver, who is in custody, fired gunshots from the truck. Police, however, did not confirm that.

Reportedly, the suspect jumped out of the vehicle with two fake guns and was shot by a nearby on-duty NYPD officer in the abdomen. He was then transported to a nearby hospital, the Times reported. There are currently no other suspects.

President Donald Trump quickly tweeted a condemnation of the attack. "In NYC, looks like another attack by a very sick and deranged person. Law enforcement is following this closely. NOT IN THE U.S.A.!" the president tweeted.

In NYC, looks like another attack by a very sick and deranged person. Law enforcement is following this closely. NOT IN THE U.S.A.!

The suspect shouted "Allahu Akbar" NBC News reported. The term is Arabic for "God is great."

The reputed attack occurred a short walking distance from the site of the 2001 terror attacks on the World Trade Center and in the heart of Tribeca, one of the city's more affluent neighborhoods. It also occurs on the same day as the Greenwich Village Halloween Parade just a short distance north of the scene of the incident.

Students from Stuyvesant High School said they had seen a man shooting from a white pickup truck with a Home Depot logo on it which then collided with a school bus, the Times reported.

The collision with the school bus may have been intentional, but details weren't immediately clear. Home Depot has since confirmed that the truck belonged to that company.

PHOTO: Scene of incident in lower Manhattan, where multiple people are injured pic.twitter.com/RH4QycdGA1

This video appears to show the immediate aftermath of attack in NYC today—mangled bikes along the West Side Highway pic.twitter.com/3gYBz1Z2lT — Jack Smith IV (@JackSmithIV) October 31, 2017