Republicans think workers are fools who can be continually conned 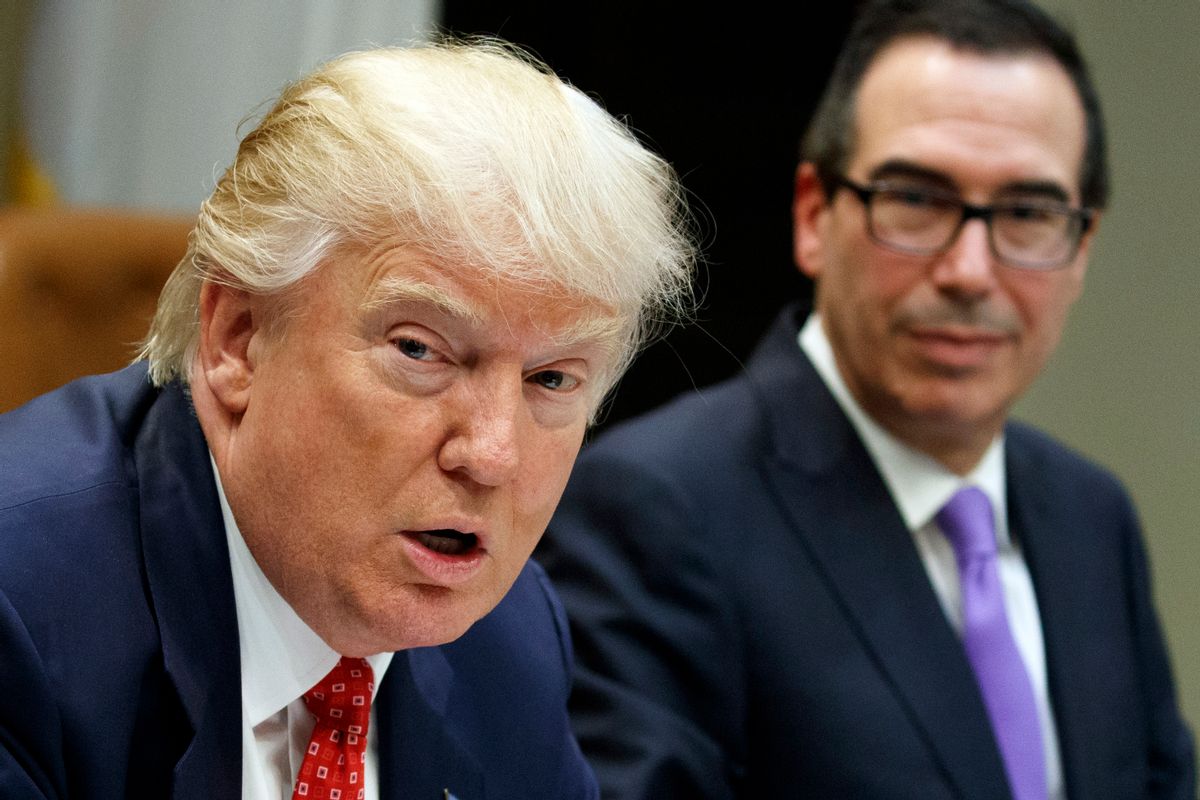 A single statistic explains it all: 1 percent of Americans – that is the tiny, exclusive club of billionaires and millionaires – get 80 percent of the gain from this tax con. Eighty percent!

But that’s not all! To pay for that unneeded and unwarranted red-ribbon wrapped gift to the uber wealthy, Republicans are slashing and burning $5 trillion in programs cherished by workers, including Medicare and Medicaid.

Look at the statistic in reverse, and it seems worse: 99 percent of Americans will get only 20 percent of the benefit from this GOP tax scam. That’s not tax reform. That’s tax defraud.

Republican tax hucksters claim the uber rich will share. It’s the trickle down effect, they say, the 99 percent will get some trickle down.

It’s a trick. Zilch ever comes down. It’s nothing more than fake tax reform first deployed by voodoo-economics Reagan. There’s a basic question about this flim-flammery: Why do workers always get stuck depending on second-hand benefits? Real tax reform would put the rich in that position for once. Workers would get the big tax breaks and the fat cats could wait to see if any coins trickled up to jingle in their pockets.

House Speaker Paul Ryan claimed Republicans’ primary objective in messing with the tax code is to help the middle class, not the wealthy. Well, there’s a simple way to do that: Give 99 percent of the tax breaks directly to the 99 percent.

The Republican charlatans hawking this new tax scam are asserting the pure malarkey that it provides two, count them TWO, trickle-down benefits. In addition to the tried-and-false fairytale that the rich will share with the rest after collecting their tax bounty, there’s the additional myth that corporations will redistribute downward some of their big fat tax scam bonuses.

A corporate tax break isn’t some sort of Wall Street baptism that will convert CEOs into believers in the concept of paying workers a fair share of the profit their labor creates.

Corporations have gotten tax breaks before and haven’t done that. And they’ve got plenty of cash to share with workers right now and don’t do it. Instead, they spend corporate money to push up CEO pay. Over the past nine years, corporations have shelled out nearly $4 trillion to buy back their own stock, a ploy that raises stock prices and, right along with them, CEO compensation. Worker pay, meanwhile, flat-lined.

In addition to all of that cash, U.S. corporations are currently sitting on another nearly $2 trillion. But CEOs and corporate boards aren’t sharing any of that with their beleaguered workers, who have struggled with stagnant wages for nearly three decades.

Still, last week, Kevin Hassett, chairman of the President’s Council of Economic Advisers, insisted that the massive corporate tax cut, from 35 percent down to 20 percent, will not trickle, but instead will shower down on workers in the form of pay raises ranging from $4,000 to $9,000 a year.

Booyah! Happy days are here again! With the median wage at $849 per week or $44,148 a year, that would be pay hikes ranging from 9 percent to 20 percent! Unprecedented!

“Dishonest, incompetent, and absurd” is what Larry Summers called it. Summers was Treasury Secretary for President Bill Clinton and director of the National Economic Council for President Barack Obama.

Jason Furman, a professor at the Harvard Kennedy School who once held Hassett’s title at the  Council of Economic Advisers, called Hassett’s findings “implausible,”  “outside the mainstream” and “far-fetched.”

Frank Lysy, retired from a career at the World Bank, including as its chief economist, agreed that Hassett’s projection was absurd.

Hassett based his findings on unpublished studies by authors who neglected to suffer peer review and projected results with all the clueless positivity of Pollyanna. Meanwhile, Lysy noted, Hassett failed to account for actual experience. That would be the huge corporate tax cuts provided in Reagan’s Tax Reform Act of 1986.

The other gob-smacking bunkum claim about the Republican tax scam is that it will gin up the economy, and, as a result, the federal government will receive even more tax money. So, in their alternative facts world, cutting taxes on the rich and corporations will not cause deficits. It will result in the government rolling in coin, like a pirate in a treasure trove. That’s the claim, and they’re sticking to it. Like their hero Karl Rove said, “We create our own reality.”

If the Pennsylvania politician truly believes that’s the case, it’s not clear why he voted for a budget that would cut $473 billion from Medicare and $1 trillion from Medicaid. If reducing the tax rate for the rich and corporations really would shrink the deficit, Republicans should be adding money to fund Medicare and Medicaid.

While cutting taxes on the rich won’t really boost the economy, it will increase income inequality. Makes sense, right? Give the richest 1 percenters 80 percent of the gains and the remaining 99 percent only 20 percent and the rich are going to get richer faster.

Economist Thomas Piketty, whose work focuses on wealth and income inequality and who wrote the best seller “Capital in the Twenty First Century,” found in his research no correlation between tax cuts for the rich and economic growth in industrialized countries since the 1970s. He did find, however, that the rich got much richer in countries like the United States that slashed tax rates for the 1 percent than in countries like France and Germany that did not.

This Republican tax scam is a case of the adage that former President George W. Bush once famously bungled: “Fool me once, shame on you. Fool me twice, shame on me.”

Republicans, like P. T. Barnum, think workers are fools who can be continually conned. But they aren’t. They’ve been duped too many times to believe this new GOP scam will serve anyone but the rich.

Leo W. Gerard is president of the United Steelworkers union. President Barack Obama appointed him to the President’s Advisory Committee on Trade Policy and Negotiations. Follow him on Twitter @USWBlogger.