For a brief and now mostly forgotten moment, he was an evangelist — a new collection of songs demands we look back 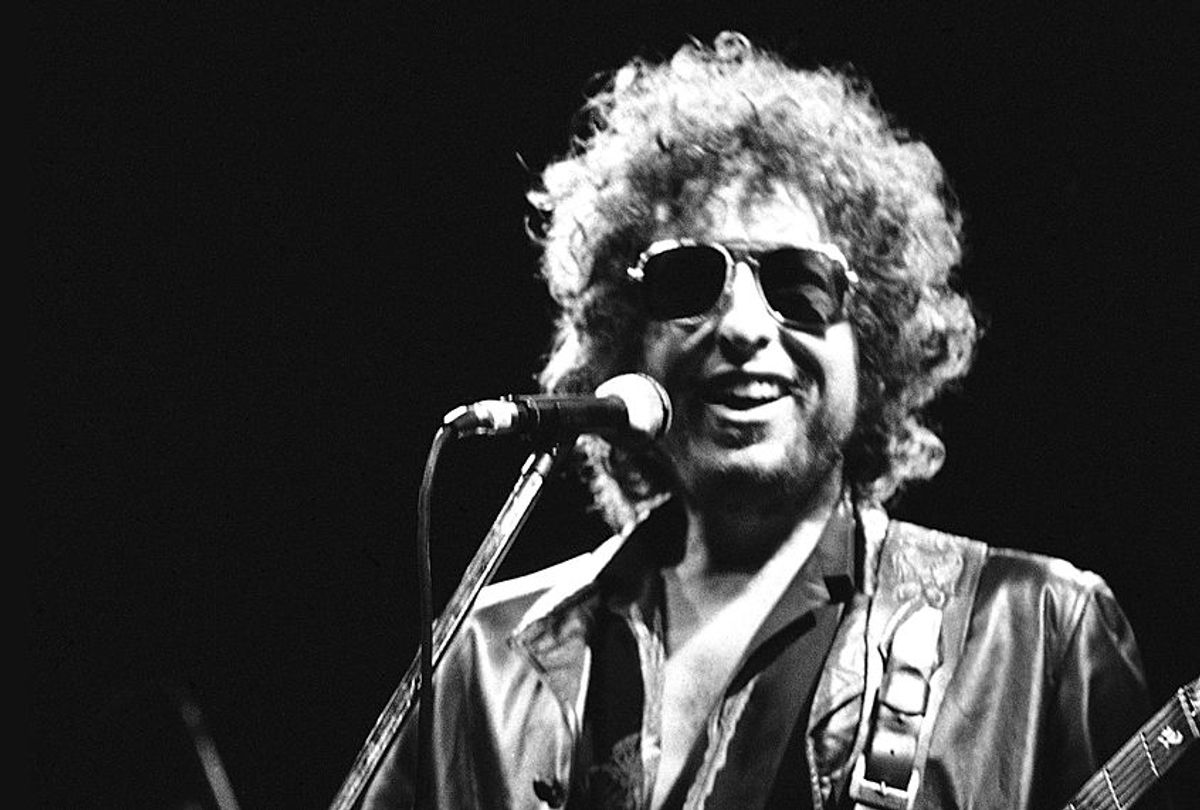 “There's no black and white, left and right to me anymore,” Bob Dylan told a crowd of 1,400 folks at the Emergency Civil Liberty Committee’s annual Bill of Rights dinner in 1963 during his acceptance speech for the Tom Paine Award.

“There's only up and down, and down is very close to the ground, and I'm trying to go up without thinking about anything trivial such as politics” he added. Odd words for a person being honored for their work promoting civil rights, let alone someone who had quite recently become a protest-music icon.

That wasn’t even the strangest part of the speech. He also said of Lee Harvey Oswald days after he assassinated President John F. Kennedy “I got to admit honestly that I too — I saw some of myself in him.” He continued in another vein, “My friends don’t have to wear any kind of thing to prove that they’re respectable Negroes.”

These comments garnered plenty of boos and hisses. At the time, people were shocked, but upon reflection it was clear that Dylan was being Dylan: rejecting the image that people projected on him. Such rejection would become the voice and thrust of that generation's counter-culture movement.

The following year, Dylan told critic Nat Hentoff “Me, I don’t want to write for people anymore — you know, be a spokesman. From now on, I want to write from inside me." He added "I’m not part of no movement.”

His 1964 song “My Back Pages” essentially rejected his protest past. “‘Equality,’ I spoke the word as if a wedding vow," he wrote. "Fearing not that I'd become my enemy in the instant that I preach."

In 1965, he’s take a sledgehammer to his entire folk-protest persona by debuting his new, fully electrified rock ‘n’ roll style to the audience at the Newport Folk Festival, a moment that many music historians hail as a turning point in the evolution of rock.

Most know these two Dylans, the young folk singer who wrote protest music and the rocker who rebelled against it. But Dylan's penchant for redefining himself didn’t end when he picked up an electric guitar.

From the late 1970s until the early ’80s, Dyalan went through a so-called “born-again Christian phase.” This period is often regarded as brief detour in Dylan’s long and winding career. Indeed, Dylan’s memoir, "Chronicles: Volume One," skips over this part of his life almost entirely.

Now, with the release of the latest entry in his vaunted "bootleg" series, "The Bootleg Series Vol. 13: Trouble No More 1979–1981," and the recent book "Bob Dylan: A Spiritual Life" exploring whether Dylan is in fact a Christian, this period is beginning to seem more revealing about the artist than previously believed.

“There’s only two kinds of people — there’s saved people and there’s lost people. Jesus is the lord. Every knee shall bow to him,” Dylan told a Tempe Arizona crowd in 1979, to a tepid response.

The albums of this time, "Slow Train Coming" (1979), the first of Dylan’s Christian albums, "Saved (1980) and "Shot of Love" (1981), were met with much of cynicism and confusion. Rolling Stones guitarist Keith Richards famously accused Dylan of trying to make a buck. “The prophet of profit" he called him. Others thought Dylan had simply lost his mind. His open embrace of Jesus opened him up to more scrutiny than bringing an electric guitar to a folk music festival years before.

In retrospect, though, it’s hard to see the singer's turn to faith as anything other than an authentic change of heart in a way that was distinctly Dylan-level unpredictable.

Supposedly, the seed of this turn was planted in Dylan by a woman he was living with at the time who became born again and told him about her faith. The depth of her commitment to Christ inspired a similar quest in him. He would sing about her in the song “Precious Angel.”

Even though talk of Dylan’s conversion was raising eyebrows prior to the release of his album, many were still shocked when at his 14-night "Slow Train Coming" tour debut at the San Francisco Warfield he played exactly zero songs from his universally loved back catalog. Instead, he offered an entirely new set list of music detailing his religious conversation. To say there were some angry reactions by longtime fans is an understatement.

But it wasn't a cash grab, despite Richards’ comments. If there was money to be made in Christian music, it wasn’t yet a known quantity. If anything, it probably seemed like career suicide at the time.

In fact, "Slow Train Coming" was the record that brought into the light the financial potential for overt Christian music. The record went platinum, earned him a Grammy and a Dove award (the Christian Grammy equivalent) and the respect and adoration of a market of born-again Christians.

According to the "Encyclopedia of Contemporary Christian Music," the album was a turning point in the Christian community. “The growth of Christian music in the future would not come from acceptance by the secular, or non-gospel music world, but from better marketing within its own rank.”

Years after Dylan’s concerts no longer resembled old tent revivals, the Christian music industry would foster its own stars: Amy Grant, Michael W. Smith, Petra. One wonders, however, whether they would have risen so high had it not been for Dylan’s Christian period. His work then would even inspire the first Christian parody band, Dove, a bizarre “Christian” alter-ego of Devo, who covered his song “Gotta serve somebody.”

Critics mostly gave "Slow Train Coming" negative reviews, but one can’t but assume it was the lyrical content any more than it was the music itself that prompted them. Rolling Stone magazine's Jann Wenner, on the other hand, gushed over it. “The more I hear the new album, the more I feel that it's one of the finest records Dylan has ever made" he said.

We should also remember that the rise of hippies produced a number of “Jesus freaks.” More than a couple of secular musicians outside of Dylan found the Lord. As well, the subject matter wasn't particularly new for Dylan. "Bob Dylan; A Spiritual Life," author Scott M. Marshall notes that the singer referenced Bible verses 89 times from 1961 through 1978, the period before his public embrace of Jesus.

Really, what happened to Dylan wasn’t unusual. He was just the highest profile boomer-generation celebrity to go the hardcore passionate born-again route. He shared this experience with people in a truly honest and emotional way, no matter your thoughts on the topic.

Regardless of how it strikes you to hear Dylan sing “Ya either got faith or ya got unbelief and there ain’t neutral ground,” there’s an absolute vulnerability on these records as Dylan explores his faith openly on the record. Besides, if you really listen to Dylan’s Christian records, he yearns much more than he preaches. “I believe in you even through the tears and the laughter, I believe in you even though we be apart," he writes.

It’s here that we really see Dylan for who he is. If there’s anything that people have commonly misunderstood about Dylan it's that he's not a dispenser of knowledge, he’s a seeker of truth. This, in part, explains why he recoiled at the label of a protest singer, as he didn't see himself (and we shouldn't have seen him) as writing songs that incited specific social changes. Rather, he documented the climate of the times like an on-the-street journalist. Here, his Christian music is a window into the “Jesus freak” movement of the late ’70s, a movement that would, in part, lead to the rise of the evangelical conservative movement of the ’80s.

It’s no wonder that, in the end, Dylan walked away from Christian music without actually denouncing it. In a 1984 interview with Rolling Stone he said he was a literal believer of the Bible, but also didn’t like the label “born-again Christian” — a strange response indeed, but consistent with his distaste for labels being projected on him.

In the years following his Christian period, Dylan has given conflicting information about where he actually stands now. He told Newsweek in 1997: “Here's the thing with me and the religious thing . . .  I find the religiosity and philosophy in the music." In 2001 he said: “I’ve had a God-given sense of destiny. This is what I was put on earth to do.”

This nebulousness reminds us that Dylan's faith, and Dylan himself, are moving targets. To understand Dylan is to truly appreciate the ongoing complexity that is his relationship to God. We shouldn't simply see this as a period where he suddenly, briefly “went Christian.” Dylan's spiritual quest is constant, as is his willingness to scrap his identity and start all over again — an artist who "don't look back."