The young Australian band never cared about labels, so they showed up uninvited at punk rock's Mecca in 1977 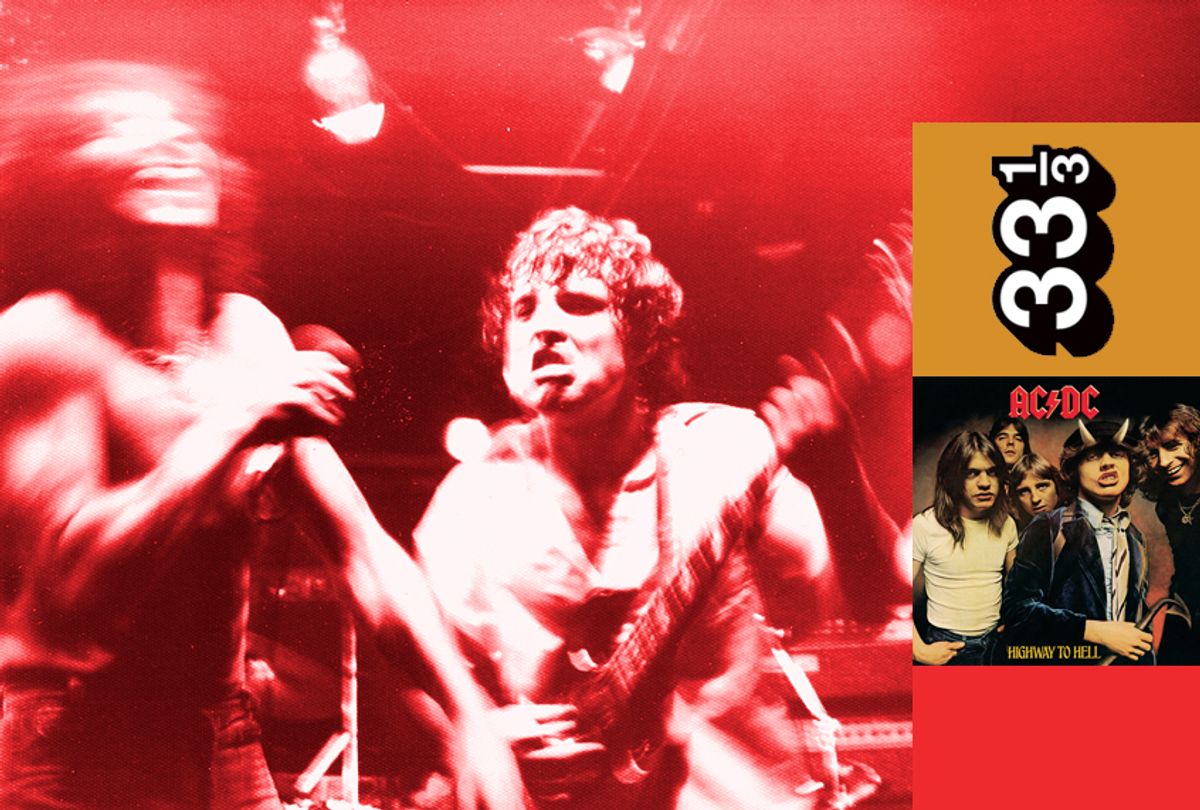 AC/DC made it to New York City in 1977, opening for the Dictators and the Michael Stanley Band on August 24, at the Palladium, the original “Academy of Music,” a converted movie house that provided touring and local bands with a venue size between a small club and a large arena. Located on East Fourteenth Street in a neighborhood bordering scruffy, downtown mania, the Palladium was an exciting place to play, and a baptism by urban fire for AC/DC. Two days after the show, John Rockwell in The New York Times described the night as “a deliberate attempt to bring punk rock to a major concert hall” before admitting that the bill “wasn’t actually quite a punk night, after all.” AC/DC, he noted, “was the closest thing to the punk norm,” even as they exhibited “showbiz pretension” — i.e. “Mr. Young” prancing about the stage like a manic, drooling child. Lamented Rockwell: “the band is tight but the singer is undistinguished and the songs rarely ride above the puerile-provocative.” One man’s infantilism is another’s statement-of-purpose. AC/DC would commemorate this dynamic for their entire career.

Andy Shernoff, founder of the Dictators, remembers the show and the Aussies well. “They were great, very friendly,” Shernoff says. “They were not superstars yet, they were easy to hang out with, no pretension, no attitude.” He adds, laughing, “Angus is a midget! Bon Scott was small, too. It’s amazing. How can short guys make a sound like that? It’s almost technically impossible.” Angus is five-foot three, his band members only a couple inches taller; watching from the wings, aware that his own group wasn’t delivering onstage as they could, or should, Shernoff was knocked out. “They had killer live songs, better than on the studio albums. People loved them. They were fantastic, no bullshit.” Shernoff watched Angus fearlessly head out into the sold-out crowd of 3,400, a tiny, guitar-shredding kid riding the shoulders of a burly roadie, possessed and obviously getting off on the air-punching excitement.

Following the show, AC/DC decided on their version of an after-hours party: they toweled off, climbed into the tour van, and headed downtown. Their destination was a mile away, but felt mythically distanced from the cultural boundary of Fourteenth Street. In the sticky and steamy summer of 1977, New York City was a simmering stew of social unease. David Berkowitz — aka “Son of Sam” — had been arrested two weeks before AC/DC arrived in Manhattan, the killer’s year-long span of murders mercifully ended. The city was reckless, loud, anxious and brimming with a downtown-bred music revolution, and on a dilapidated avenue, a derelict bar became the epicenter of no-frills, streetwise rock & roll. CBGB had opened to little fanfare several years earlier, but by the time AC/DC brashly pulled up to the tattered awning in August, the club was national news. Punk Rock had a name and fervent disciples. John Holmstrom and Legs McNeil co-founded PUNK magazine in 1975; the magazine’s cartoons, maverick writing and sensibility was shaped during many late hours on the Lower East Side and became, in large part, the movement’s standard bearer. Fresh from the co-bill with the Dictators, a major-label band associated with the punk movement, and curious about CBGB and its risky vibe, AC/DC were eager to play for as many folks as possible, whether they were raising fists in arenas or threatening fists in dive bars.

An hour after the Palladium show, the guys surprised CBGB management by showing up uninvited. (The lead band on the bill that evening was Marbles.) AC/DC plugged in and hastily played a handful of songs, including “Live Wire” and “She’s Got Balls,” each clocking in at over seven minutes, with long guitar solos pushing the limits of the edgy punk ethos. Bon Scott was wearing his standard stage attire (he’d probably just wrung it out after the Palladium show): crotch-choking jeans and a sleeveless denim vest, soon removed to give his chest hair and medallion more exposure. His hair was shaggy and shoulder-length. He was covered in ink. And the band was loud. 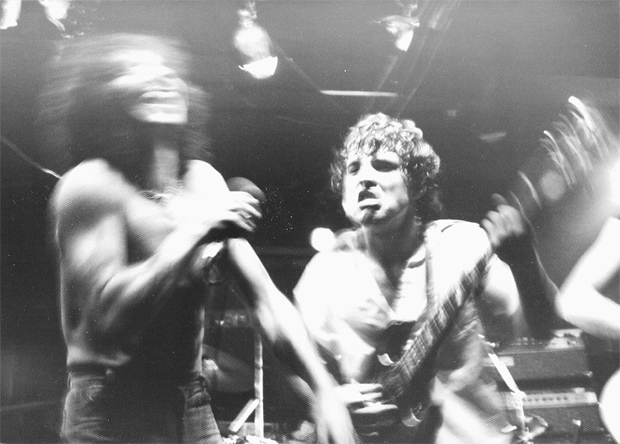 “AC/DC were marketed as a punk band around that time,” Holmstrom remembers. “CBS bought ads for them in PUNK, we interviewed them for PUNK.” Holmstrom’s riotous dialogue with Angus and Bon Scott ranged in subjects from herpes, the band’s “favorite disease,” to taste in literature. Bon’s most recently devoured book was a collection of eighteenth-century erotica, what Angus happily called “about the filthiest book I ever read.” Characteristically, AC/DC shrugged their collective shoulder at the punk tag. “We just call ourselves a rock band,” Angus said at the time. “We don’t like being classified as a ‘punk rock’ band. Not everyone can be punk rock. It’s great that there are new bands, fresh faces and all that, but there are good bands and bad bands within that punk rock.” He considered for a moment, adding, “Actually the punk thing is pretty cool in America. It’s not like England where it’s a very political thing — a dole queue type thing. There’s too much money over here to classify all the punk bands as dole queues and dropouts. It’s just a young thing — a new breed type thing.”

What Holmstrom remembers of AC/DC is the band’s bone-simple, timeless approach. “They certainly weren’t your traditional heavy metal band,” he notes. “The heavy metal of the mid-70s was a ponderous, bombastic, slow music. They were a high-energy rock & roll band and, before the Sex Pistols changed the image of punk rock from faster and louder to a more political and anthemic music, AC/DC could be classified as punk.” Holmstrom continues, “Then again, so were the Bay City Rollers, Alice Cooper, the Stooges, the New York Dolls, Eddie and the Hot Rods, and hundreds more bands. AC/DC were a great rock & roll band, and that’s basically what punk rock was before things went nuts in 1977.” A few months after the Palladium show, New York Rocker writer Howie Klein put it this way: “AC/DC doesn’t use safety pins, never went to art school, and they sure don’t limit themselves to 2 or 3 chords, but if new wave is a reaffirmation of rock & roll’s traditional values, this band is an important part of it.”

The detonation at CBGB, witnessed by a small crowd on a muggy Wednesday night, has been widely bootlegged, archivists digging the idea of AC/DC playing an infamous club during an epochal year. (My favorite moment: some unknown fan, between beers, idly curious about this little band, is caught on-mike asking, “Isn’t Angus the name of the monster in Lost in Space?”) In the crowd at CBGB that night was Robert Francos, who at the time was editing and publishing the New York rock & roll zine Ffanzeen, as he explored the street-rock scene. Francos remembers the band’s impromptu appearance: “As Marbles’ set was ending, suddenly there was a commotion at the back of the club and I figured, Oh, I bet some drunk was getting tossed. Then I noticed part of the crowd moving toward the stage, surrounding a cluster of people. That’s when they announced the next band to play over the speaker, and it was not one who was scheduled. One of the group of people had long-hair, muscles and a grainy face; the one behind him was diminutive, wearing short pants that looked like part of a school uniform, and was carrying a guitar case.

“At one point, Angus switched guitars that either had a remote or a really long cord (I can’t remember which). He then made his way through the crowd, while playing wild solo licks, and went outside. So, there was little Angus, while still playing, talking to the transient gents from the Palace Hotel milling outside CBGB.”