How hip-hop is trying to get you healthy

In communities the government has neglected, rappers are stepping up to promote health and wellness 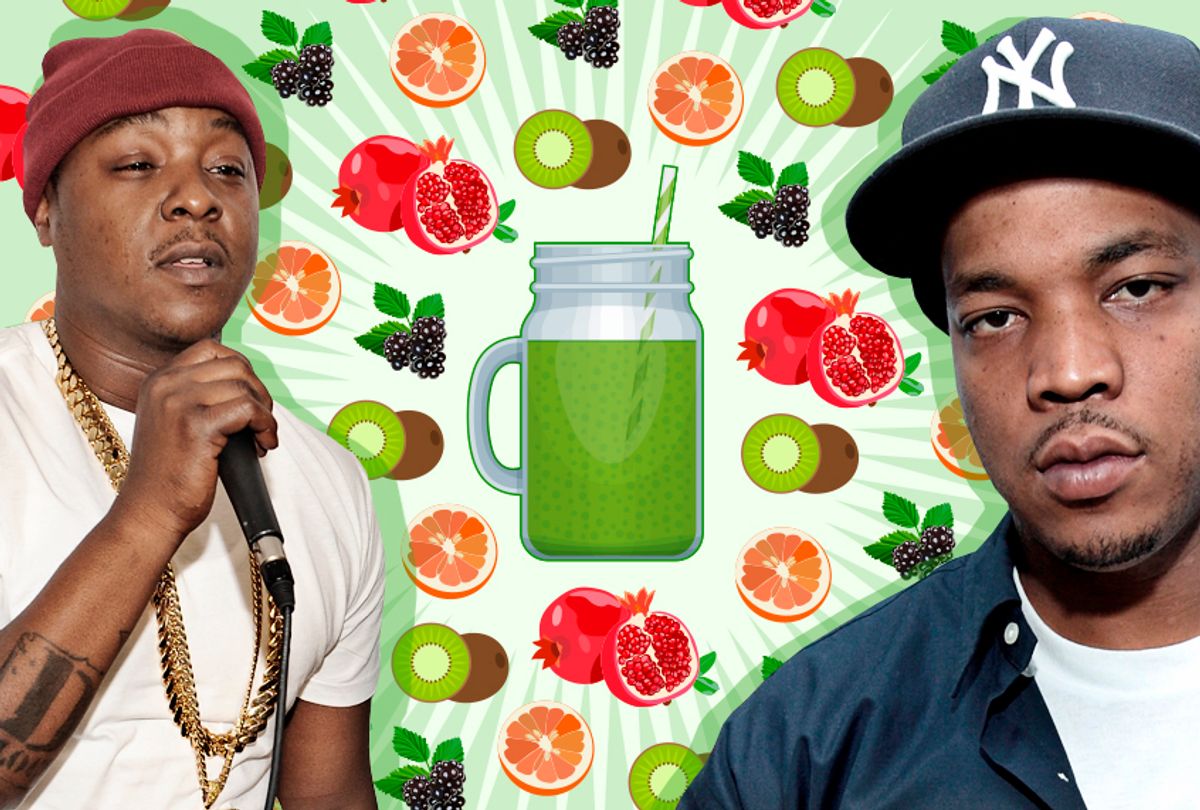 On Castle Hill Avenue in the Bronx, a street filled with pizza shops, bodegas and nail salons, one store stands out: Juices For Life.

A chalkboard sign out front often teases wheatgrass shots, smoothies and fruit moss, sometimes with hip phrases such as "We got the juice now!"

Inside, a bar sits on top of an array of fresh fruit and vegetables: pineapple, kale, celery, cucumber, grapes, red and green apples, berries of all kinds. On the menu, the juice offerings are labeled based on your health concerns. There's a option for acne, for allergies, for depression, for hypertension, for obesity, even for cancer.

But Juices For Life wasn't started by a Whole Foods defector, or a gentrifier trying to turn a profit. Instead, it's the brainchild of New York rap legends Styles P and Jadakiss.

"If you walk down the block in the 'hood, it's nearly impossible to find something healthy to put in your body. We were consuming whatever was made available to us," Jadakiss says in a short film about the bar's opening. "We didn't have the knowledge or the opportunity that we do now, and that's exactly what we're trying to give to our community."

Since Juices For Life arrived on Castle Hill in 2010, three more locations have opened up, one in the nearby Throggs Neck neighborhood of the Bronx, one a few miles north in Yonkers, where the rappers were raised, and, most recently, one in Bed-Stuy, Brooklyn. "Our juice bars are opened in the 'hoods on purpose," Jadakiss says in the video, "to educate our people on health awareness."

While hip-hop can be stereotyped as glorifying heavy weed smoking, drinking and a general lack of self care, a clutch of rappers are emerging as leaders of a focused health movement. Given that health and health care disparities continue to be significant across racial lines, it's an urgent one.

According to the CDC, the life expectancy for black people is four years less than that of their white counterparts. Moreover, black people have the highest death rate for all cancers, and "blacks in the 18 to 34 and 35 to 49 age groups were nearly twice as likely to die from heart disease, stroke and diabetes as whites," CNN reported.

Maya Feller, a registered dietician and nutritionist, pins at least some of this to the reality that the economic community in which individuals live greatly determines their health on many levels. Given that the U.S. is still significantly segregated, with low-income areas often hosting tight black and brown communities, there are islands of people of color struggling with poor health across the country. But she told Salon this isn't because of a lack of education or will. This is about access.

Feller describes a "food desert" in urban settings as any neighborhood where there is not "a good, viable grocery store, and what you have is bodegas, fast-food restaurants, chain restaurants." She tells Salon "What I call those areas are 'fast-food swamps,' because it’s not that there’s no food, it’s just that there’s an abundance of fast food," and not much else.

As rapper SwizZz told HipHopDX, "You see the lack of grocery stores in urban communities, and for people in some 'hoods it’s easier to get access to guns than it is to get fruits or vegetables."

"The truth of the matter is, when you step into these impoverished communities — you step into any 'hood across America — it’s a food desert," Quentin Vennie, Baltimore native and author of "Strong in the Broken Places: A Memoir of Addiction and Redemption through Wellness" tells Salon. "In my old neighborhood, there’s one grocery store," Vennie says, "and you go into the produce section, and there are flies all over the place, the kale is limp, the celery is flimsy, nothing’s fresh."

Vennie was diagnosed with anxiety and depression at 14. Years later, when he went on anxiety medication, he struggled with a two-year addiction that included surviving an overdose and two suicide attempts. Through meditation, yoga and nutrition, he transformed his body and his life.

For Vennie, this is no accident. Black Lives Matter has resurfaced the language of state-sanctioned violence when speaking about what black people and communities endure at the hands of the system. For Vennie, this concept includes not only the immediacy of police killings, but also "slow deaths" caused by constricted health resources.

"In a city like Baltimore," he says "one of the most dangerous cities in America — and even my community, the Park Heights community of West Baltimore — homicide was like the fifth or sixth leading cause of death." He adds, "HIV, hypertension, diabetes, and cancer were the top four."

Feller worries that if President Donald Trump fulfills his promise to undo the Affordable Care Act sometime during his tenure, it will disproportionally affect black communities. "In this country, because many black and brown people are low-income people, dismantling what little health care folks have is detrimental," she tells Salon. "Now it goes from slow death to imminent death."

With rappers already leaders in their communities in cultural, and sometimes financial, capacities, a crop of activated hip-hop artists are channeling their influence in an attempt to address this threat through multiple means.

Much of that has to do with individuals in the hip-hop community simply being purposefully open about their own health problems and highlighting their treatments and transformations. For instance, Rapper Gucci Mane kicked an addiction and dropped 75 pounds during a three-year prison stint in what Vogue described as "hip-hop's biggest makeover in recent years." He was released last year, never looking healthier or happier.

In 2016, rapper Kid Cudi announced via Facebook that he was checking himself into rehab for "depression and suicidal urges." His social media post birthed the hashtag #YouGoodMan, which opened up space for people online to talk about mental health, race and masculinity.

In 2015, Jay-Z and Beyoncé said they were going vegan for 22 days. During an interview after his album "4:44" dropped this year, the rapper talked openly about attending therapy to overcome generational trauma.

It's a movement that's become so pronounced and influential that a new documentary following several rappers who've pursued weight loss and wellness called "Feel Rich: Health Is the New Wealth" was released this spring. On top of the inspiring individual stories, the film stresses the importance of hip-hop in promoting health, particularly in low-income and black communities.

Styles P says in "Feel Rich" that, much in the same way hip-hop constantly sets trends in fashion, language and popular culture, health-conscious artists "can take the responsibility to say this is my lifestyle and people start gravitating towards it." He adds that rappers should "boast and brag about keeping your body right, keeping your temple right, the same way we boast and brag about the jewels, the cars . . .  You can’t enjoy none of that if you’re not in good health."

Elsewhere, Stic.Man from the rap duo Dead Prez agrees that hip-hop can become a vehicle for promoting holistic health. At 22, he was diagnosed with gout, which he overcame through the adoption of a plant-based diet and by taking up Kung fu. Healthy now, he believes that active wellness is actually part of hip-hop's DNA.

"It started out as a healthy alternative to violence and disenfranchisement. That’s what hip-hop was," he told Vibe. Now, "we make healthy the new gangsta, and our music is still strong. It’s still got the bass and the 808 and everything that we like for the energy, but instead of putting Hennessy on top, we put green juice on top and balance it out." Perhaps one could see mega-producer DJ Khaled's commercials for Silk brand soy milk as an example of that.

Even non-rappers are relying on hip-hop's dialect to engage communities of color in healthy living. Take Ron Finley, an urban gardener from South Central Los Angeles, who calls himself a "gangsta gardener." In a TED Talk, he stated that he started growing food in his own community after he saw "dialysis centers popping up like Starbucks."

Finley noted that that 26.5 million people live in food deserts, yet L.A. leads the country in vacant lots, offering the equivalent of 20 Central Parks in unused open space. He saw an opportunity to turn at least some of this vacant land into public gardens to feed his community.

Clearly, Finley, Stic.Man, Styles P, Jadakiss and countless, nameless others are working on a grassroots level to fill the health void in many black communities across America left by government and industry. But the lives of certain artists are also useful in reminding us why such work is so critical.

"Feel Rich" closes by honoring the many hip-hop artists who've passed away prematurely due to health problems: Phife dawg, at 45 from complications due to diabetes; Big Pun at 28 from a heart attack; Heavy D at 44 a from pulmonary embolism; J Dilla at 32 from cardiac arrest. The list goes on.

With black lives on the line both inside and outside of hip-hop, Stic.Man tells HuffPost, "advocating health is a revolutionary act. It’s a form of activism."