"Thor: Ragnarok" is a hammer in the face to the alt-right 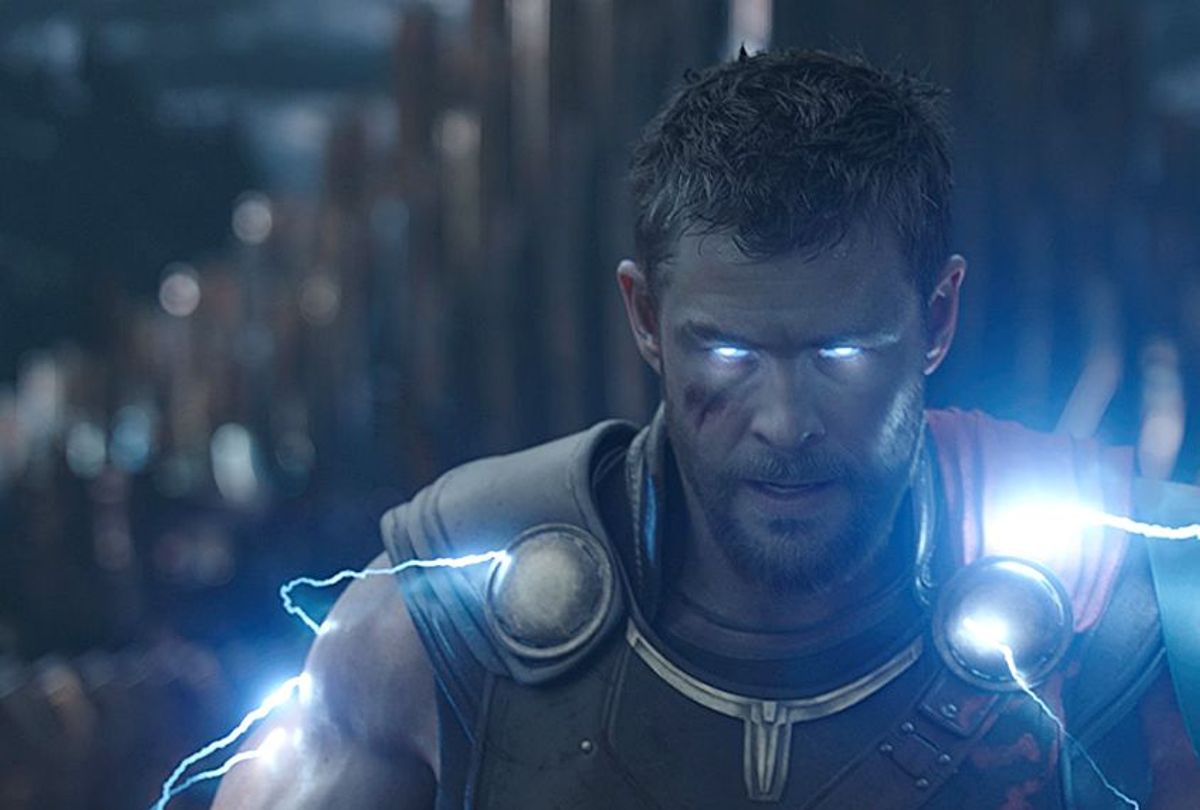 It feels absurd to have to say this, but times are strange, the intermingling of politics and pop culture even stranger, and one, it seems, can never be too careful. So, here goes: I truly, deeply hope that “Thor: Ragnarok” does not embolden modern white nationalists.

The latest in Marvel’s slate of Thor superhero fantasies — which is either the third or sixth entry, if “Avengers” movies count as “Thor” movies — is already garnering wild praise for its inventiveness, colorful explosiveness and sheer fun. Less “Captain America: The Winter Solider” and more “Guardians of the Galaxy.” Against the relative doom-and-gloom of 2013’s “Thor: The Dark World,” “Ragnarok” seems to embrace the inherent silliness of muscly Norse gods in complicated helmets smashing into each other, in their recurring bids to either execute or prevent the execution of one or another world-ending scheme. In Norse mythology, Ragnarök is itself an apocalyptic calamity, an enormous battle between gods, which sees the world submerged in water, to later resurface and be repopulated by human survivors. This makes it a consummate comic book, and comic book movie, event — a “Crisis”-style opportunity to simplify or reboot complicated canon continuity.

In the contemporary moment, anything even vaguely Nordic-related also carries a weird, sinister charge. The revitalization of white supremacist movements in the West (under the guise of “white nationalism” or “White Lives Matter” or the “alt-right” or other euphemistically named movements) often proceeds from a white, European, Christian identity. Sure, they often seem to play it pretty fast and loose with the “Christian” stuff. And not just because the teachings of the actual New Testament tend to come down quite harshly on points like hating your fellow man. But because contemporary white supremacy is ideologically and aesthetically informed by the same sort of Euro-pagan, pseudo-heathen mythologies exploited by stuff like the “Thor” movies.

In 2015, three men in Virginia were arrested and charged for attempting to bomb black churches and Jewish synagogues, as part of a plan to initiate a race war. Beyond their whiteness, and their radical hatefulness, the culprits shared a belief in Odinism, a (sort of) old world European belief system. No burning crosses or biblical, fire-and-brimstone barking for these racists. They pledged themselves not to Christ, or to the traditional notion of God, but to Odin, an ancient Norse god.

In the “Thor” films, Odin is played by Anthony Hopkins and depicted as Thor’s dad and the ruler of the magical realm of Asgard. On the premium cable fantasy series, a version of Odin, called “Mr. Wednesday,” folklore is played by Ian McShane (Wednesday itself derives from the Old English wōdnesdæg, in reference to Odin, or Wōtan, as he’s called in Germanic), and depicted as a wandering, omnipotent huckster. In Norse mythology, Odin is a key figure — if not the key figure, inspiring myths, poems, operas, the carvings of ancient archaeological runes and, indeed, even his own belief system.

Despite its ties to ancient Germanic deities, Odinism is a form of Heathenry, and classified as a “new religious movement,” a term used to apply broadly to various pagan, occult or otherwise “alternative” religious groups and denominations, which range from Satanism to Christian Science to the Hare Krishna movement. While not all modern practitioners of Heathenry are racists or white supremacists, those who follow Odinism hew to a more folkish, or racialist, belief system: one that valorizes Odin as a god of Germanic-descended peoples and so privileges anyone of Northern European descent. More extreme Odinists explicitly believe that theirs is the true religion of the Aryan people, with even Christianity being mongrelized. Some incorporate the Nazi swastika — a rather obviously racist and white supremacist symbol — into more traditional Norse mythological iconography, like Thor’s Hammer (indeed: the Anti-Defamation League classifies Thor’s hammer as a “general hate symbol”).

“Odinism is undergoing a renaissance,” Brian Levin, director of the Center for the Study of Hate and Extremism at California State University, told Public Radio International earlier this year. “Now is a great time for Odinism because it fits into this historical narrative about European cultural greatness and a connection between whiteness and nationality.” International street thug hate organizations like the Soldiers of Odin explicitly borrow ideas and iconography from Norse myth. Anders Behring Breivik, the Norwegian far-right terrorist who took 77 lives in 2011, also self-identifies as an Odinist. And the cultural influence extends beyond the Marvel movies, from the benign (the appearance of the Norse god Loki as a green-faced, zoot-suited monster in the Jim Carrey comedy “The Mask”) to the more patently “problematic” (the neo-völkisch, racialist ideology undermining certain strains of black metal music).

The Southern Poverty Law Center has also noted the trend, with a lengthy missive from earlier this year describing the renewed appeal in ancient European gods: “For many white supremacists, Norse mythology features folklore of revenge and battles between forces of good and evil which resonate with white supremacist views of today’s society.” Forget trumped-up talk of a new Crusade between the Christian and Islamic world. Odinism harkens back even further, to an imagined mythology believed to predate Christianity (which hardcore white supremacists reject on the basis that Christ surrendered to Jewish influence). One could (perhaps reasonably) argue that worshiping a one-eyed Germanic warrior-deity is no more or less reasonable than worshiping any other fictional prophet or Messiah figure, or some omniscient beardo in the sky. In pretty much every case, perfectly good gods are marshaled to nasty, malevolent ends. But in the context of contemporary white supremacism, this neopagan spiritual basis proves particularly baffling.

One of the things that marks the modern “alt-right” — beyond its oft-cited use of memes, jokes, irony, etc. — is the way it justifies its galling racism by deferring to the regimes of science and reason. Instead of identifying as “racist,” they practice “race realism,” which attempts to use science (in the form of IQ charts or speciously sourced and decontextualized crime statistics) to justify racist ideology. Jared Taylor, founder and editor of the white supremacist magazine the “American Renaissance,” who stumped for Donald Trump because he believed “the effects of his policy would be to reduce the dispossession of Whites,” is a prominent American “race realist.”

Such beliefs, however phony, are central to the presumed seriousness of contemporary, suit-and-tie white supremacy. This is a movement, after all, that desperately attempts to distinguish itself, both ideologically and aesthetically, from cliches of drooling, thick-necked, burning-cross-style KKK racism. The neopagan influence in modern white supremacy drastically undermines even this ersatz seriousness, revealing the utter incomprehensibility of the "alt-right" and associated ideological movements. It becomes difficult to square even the bad science of the buttoned-down race realists with berserker death cult beliefs in a final showdown between Odinist Aryans and the other races of the world — their own racialist Ragnarök.

I reserve no particular affection for the Marvel Cinematic Universe, but it’s to the credit of “Thor: Ragnarok” that it explicitly pushes back against the racialized, white supremacist co-opting of Norse-gods-cum-comic-book-heroes. The film’s titular winner-take-all melee casts Odin (Hopkins), Thor (Chris Hemsworth), and even the mischievous Loki (Tom Hiddleston) against Cate Blanchett’s scowling Hela, a goddess of death and Odin’s first born daughter, bent on expanding the colonialist Asgard empire.

In her wanton, giddy lust for violence, Hela challenges taken-for-granted notions of Asgardian exceptionalism, implicating Odin et. al in the nasty business of extra-dimensional empire building. Indeed, Hela’s plot is nothing short of spreading the Asgardian master race across the cosmos, exterminating “lesser” classes of life that stand in her way. The parallels to the similarly deluded endpoint of "alt-right" and modern white nationalists — who talk openly and with insane, straight-faced pride of an all-white ethnostate while judiciously avoiding the subject of the mass genocides required to create one — is pretty much self-evident.

It is perhaps too much to ask that (re)casting burly Norse/Germanic/Aryan icons like Thor as protectors of the downtrodden will prove enough to turn back the nasty cultural appropriation of Norse mythology. Still, “Ragnarok,” in all its kaleidoscopic, candy-flipping colors and arch silliness and stupidity, underscores the sheer preposterousness of using such figures to justify something as stupid, preposterous and wildly immoral as the modern white nationalist agenda.

Maybe it’s enough that in an age when the "alt-right" and radical white supremacist fringes co-opt all manner of various pop cultural signifiers, from “The Matrix” to Depeche Mode to Pepe The Frog, Hollywood went and made something that is defiantly not for them. At least in the trenches of the ongoing, increasingly ludicrous culture wars, the forces of progressivism have the God of Thunder on their side.