"Thor: Ragnarok": A parable about the refugee experience?

Cartoonish and hilarious, the third installment of the "Thor" series has a surprisingly serious political theme 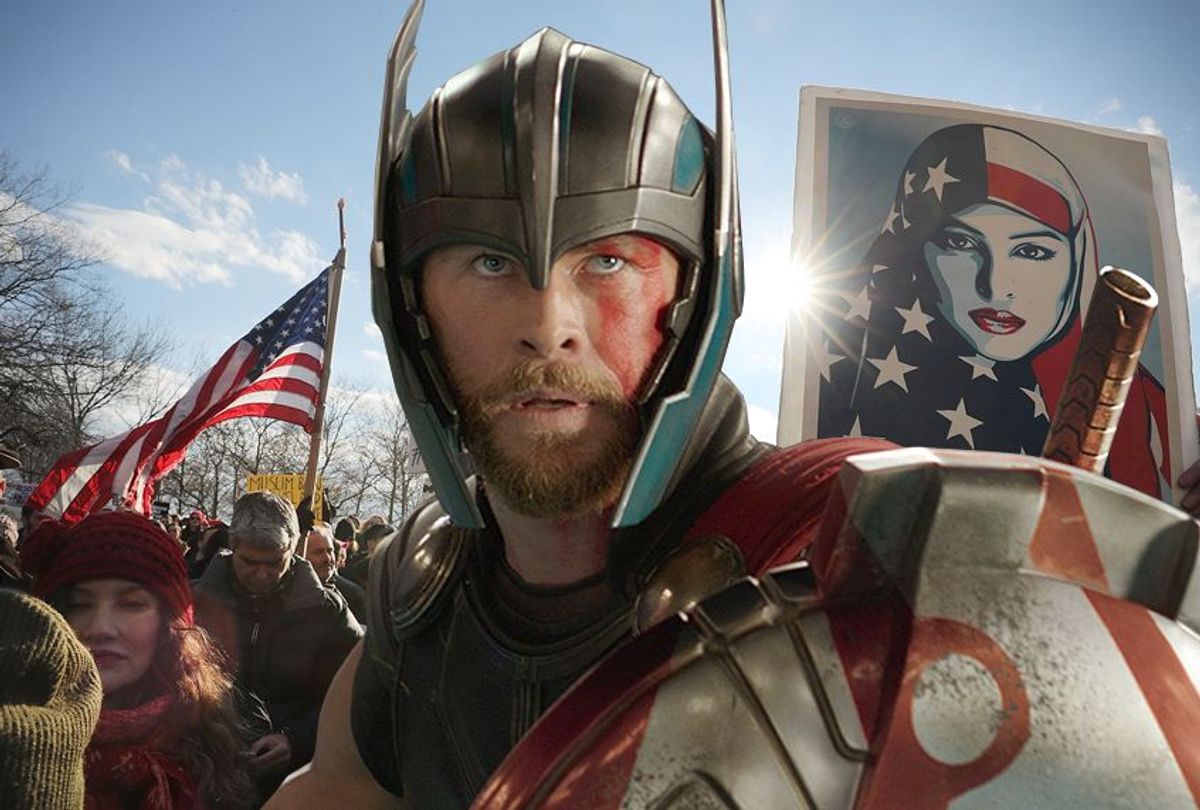 "Thor: Ragnarok" has earned a smashing 93 percent rating on Rotten Tomatoes, as critics rave over how New Zealand director Taika Waititi adapted the unique humor of his more independent films, such as the hilarious mockumentary "What We Do in the Shadows," to a big -budget space opera set in the Marvel cinematic universe. As the title indicates, the movie is about Ragnarök, the mythical apocalypse of the ancient Norse gods. While the death of worlds is not usually the stuff of lightweight, action fare, but Waititi brings his mordant yet silly, sensibility to the proceedings and somehow manages to make all work while the constant stream of jokes never flags.

(Ahem. This is a spoiler warning.)

"Ragnarok" is funny and good-natured, buoyed by the natural comic talents of its star, Chris Hemsworth. It's also one of the most comic book-y of the Marvel movies. The company clearly learned the right lessons from the success of "Guardians of the Galaxy." The first two "Thor" movies tried, much to their detriment, to ground the story a bit by setting it on Earth, but almost all of "Ragnarok" is set in distant, fictional realms like Asgard and Sakaar.

But despite the goofy tone and the exotic settings, "Ragnarok" works in some sly commentary on some grim real-world political concerns. At its heart, the movie is about the experience of the refugee, and a plea not just to American audiences, but those worldwide who watch these blockbuster superhero films, to treat those who lose their homes to war with kindness and empathy instead of rejection.

The movie is about Hela, the goddess of death (played by Cate Blanchett and based on the Norse goddess Hel), violently taking control of Asgard after the death of Odin (Anthony Hopkins) leaves a power vacuum in the mythical kingdom. She sets to work oppressing the ordinary citizens of Asgard, believing them to be hiding a magical sword she needs to conquer even more worlds. Heimdall, the gatekeeper of Asgard played by Idris Elba, starts to rescue the persecuted Asgardians, hiding them inside a mountain to protect them from Hela's wrath.

Waititi isn't particularly subtle in his portrayal of the Asgardians as refugees. The actors look disheveled and dirty from fleeing through the woods. Even Heimdall trades in his glamorous armor from previous movies for a tattered-looking hooded cloak. The Asgardians, in their mountainous hiding place or in the hold of the spaceship they use for escape, huddle in scared and exhausted-looking masses, a direct visual echo of news photos of Syrians stuck in refugee camps in Europe.

Thor and Heimdall eventually attempt to smuggle the Asgardians across the Rainbow Bridge, where they're confronted by Hela's forces. The tension throughout the battle is over whether the delicate-looking bridge will collapse, sending these helpless refugees plunging to their deaths in the waters below. It's evocative of the perilous journey that so many Syrian refugees take, in tiny and overcrowded boats, to escape the civil war. Hela's attempts to stop them, to force them to stay and live under her tyranny, reflects the efforts of Bashar al-Assad to do the same to his own people. There's even a snarling, giant wolf, the classic symbol of fascism, blocking their path as they try to escape.

These themes are also reflected in the character arcs of Thor, Bruce Banner (Mark Ruffalo), and Valkyrie (Tessa Thompson). For much of the movie, these three characters are stuck on a garbage planet called Sakaar, at the mercy of an evil gangster played by Jeff Goldblum, who kidnaps people and forces them into deadly gladiator fights. In other words, it's a plot about human trafficking, complete with a joke where Goldblum blanches when his assistant correctly identifies the people he's kidnapped as "slaves."

Just in case the viewers missed the themes, Waititi underlines and bolds what he is doing by using Led Zeppelin's pounding "Immigrant Song" to fuel two of the biggest action sequences.

Marvel movies have certainly played with serious, real-world themes before, but I don't think they've ever touched on something so immediate and politically loaded for audiences. By equating the Asgardians with refugees and putting even superheroes like Thor and Hulk in the role of immigrants who are kidnapped by human traffickers, Waititi and his team directly rebuke both American Trump voters and right-wing populists in Europe.

All this probably makes "Ragnarok" sound like a depressing movie. To be clear, it is anything but that. While there are some grave and emotional moments, most of these themes are offered up with a thick layer of jokes, some of which are startlingly — and welcomingly — caustic for a superhero movie. It's so funny that there's a good chance much of the audience will fail to notice the pointed political views on display.

Still, the post-credits "stinger" scene — and this is a Marvel movie, so there has to be one — is a particularly fitting bit of pitch-black humor. After debating with his crew about where to bring his ship of refugees, Thor cheerfully announces that he's decided on Earth, in a tone that suggests that it's beyond a doubt, in his mind, that refugees are welcome there. (That's what your literature professor called "dramatic irony," kids.) Just at that moment, the ship of the villain Thanos looms into view, blocking the path.

In age of the rising far right, with a fellow-traveler to white supremacy in the White House, it's hard to find a way to make comic-book villains scary. But the writers and director of "Ragnarok" found one: Make him a Trump-like figure, seeking to crush the dreams of bedraggled, wandering people who are just looking for a new place to call home.