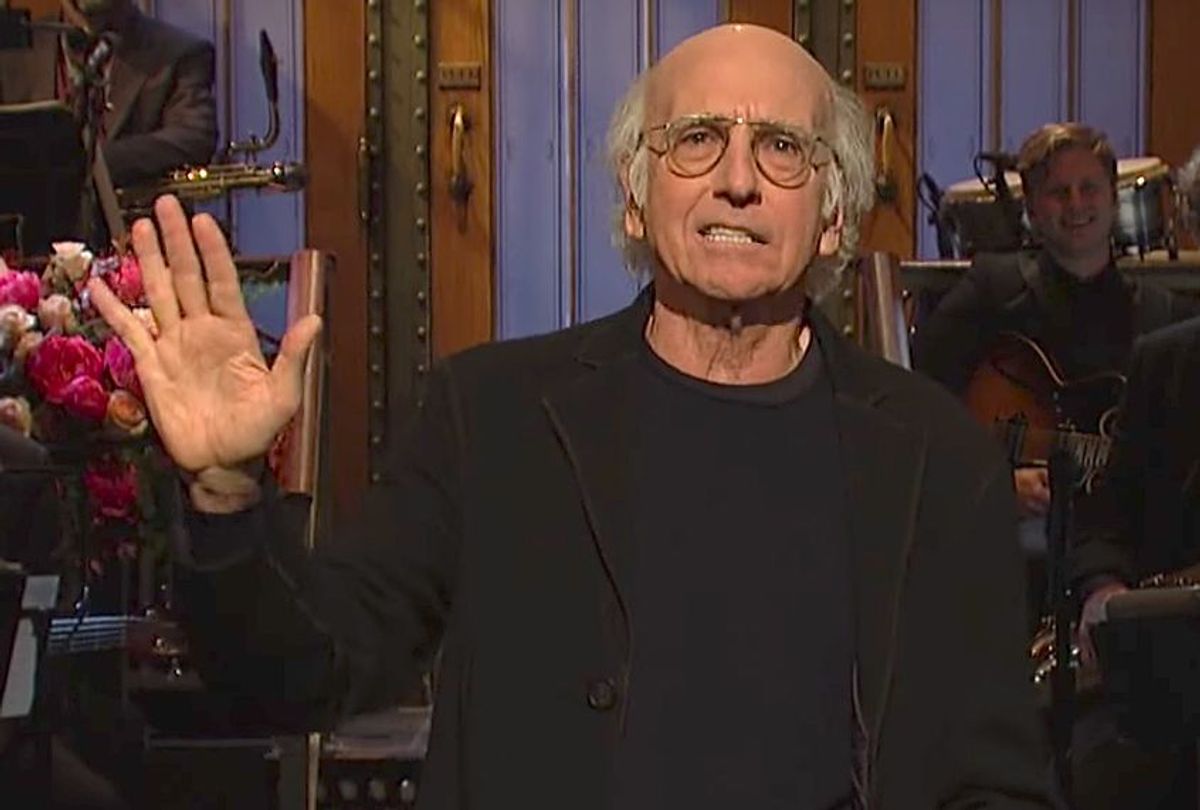 Picking up the one story that has dominated the entertainment world over the past three weeks, David steered the national conversation about male predatory behavior that spiked after allegations against Harvey Weinstein came to light into new, perhaps unwise territory.

“I couldn’t help but notice a very disturbing pattern emerging," David said, "which is that many of the predators — not all, but many, are Jews.”

“I know I consistently strive to be a good Jewish representative,” he said. It, of course, was a joke (David's comedy is wrapped around the idea that he's an awful person). "When people see me I want them to say, 'Oh, there goes a fine Jew for ya!'"

It was . . . odd, and somewhat uncomfortable. But, then again, so is David's whole act. What truly drew criticism, was the joke below.

I’ve always, always, been obsessed with women and often wondered, if I’d grown up in Poland when Hitler came to power, and was sent to a concentration camp, would I still be checking out women in the camp? I think I would. "Hey Shlomo, Shlomo, look at the one by barracks 8. Oh my God, is she gorgeous! Ugh, I've had my eye on her for weeks. I’d like to go up and say something to her." Of course, the problem is there are no good opening lines in a concentration camp: "How’s it going? They treating you OK? You know, if we ever get out of here, I’d like to take you out for some latkes. You like latkes. What? What did I say? Is it me, or is it the whole thing? It's 'cause I'm bald, isn't it?"

For a full look at how David actually delivered the lines, see the relevant part below, beginning around 3:46.

As holocaust jokes go, it's not a particularly good one, though it does line up precisely with David's self-effacing, transgressive comedy and his tendency to make a pettier, meaner version of himself the butt of almost all his jokes. It also corresponds to Jewish traditions of playful self-hatred and using the Holocaust as a source of dark mirth. Whether David's joke on Saturday is funny is entirely up to you.

Certainly the Anti-Defamation League, the self-appointed bulwark against anti-Jewish sentiment in the media and politics didn't find the monologue the least bit entertaining. “He managed to be offensive, insensitive & unfunny all at the same time Quite a feat," tweeted ADL CEO Jonathan Greenblatt.

It was a sentiment echoed by critics both Jewish and gentile, both on and off Twitter. As well, David caught substantial heat for entering the ongoing discourse about male predatory behavior in the entertainment industry and beyond and turning it into fodder for a joke about hitting on women in tragic circumstances. Whether those criticisms are valid or not, whether the material was offensive or not, is again, up to you.

What's less up for debate is that this is a classic case of a comedian not knowing their audience — a cardinal sin in the industry. Indeed, knowing his audience is becoming a bit of a problem for David.

First, it's worth mentioning that David's use of Holocaust humor comes with a very particular history.

Those intimately familiar with the bulk of 20th and 21st century Jewish humor would have recognized this effort at grabbing a few uncomfortable laughs. Making light of anti-Semitism by ironically embracing and echoing anti-Jewish hate speech is, as far as we can tell, as old as Jewish involvement in stand-up comedy itself. Using the towering example of anti-Semitism that is the Holocaust as comedic material is, also as far as we can tell, not much younger than the Holocaust. Even those members of the Jewish community who don't follow professional comedy have probably heard this kind of humor come up over the dinner table, even if they didn't approve of it.

Many have cast this vein of humor as a survival method, as a way of processing the brutal, ever-present realities of anti-Semitism and the Holocaust in the Jewish mind. Making light of the dark, laughing instead of crying, has become a regular option for many (though just as many in the Jewish community abhor it.)

In comedy, as in everything, context is everything. Here, the context was all wrong.

Yes, it is one thing for a Jewish person to make jokes that use and make fun of false stereotypes of Jewish miserliness or the Holocaust when surrounded by like-minded members of the community. That's arguably a safe space where the value of this sort of comedy is known and, if anyone has a problem with those jokes perpetuating anti-Semitism, it can be hashed out in private.

Put those same jokes on a nationally broadcasted platform, however, and the value shifts. Out there on the other side of the television screen, we have men and women who actually believe the worst things one can think or say about Jews, who minimize, deny or actually celebrate the Holocaust, who walk down the street with Tiki Torches chanting "Jews will not replace us," in polo shirts.

More importantly, you have a plurality of Americans who may not get what you would be trying to do with such a joke, who may not be familiar enough with the value of such self-effacing, transgressive work. A joke that many Jews may have accepted in private becomes completely unacceptable in public.

But it's more than that, isn't it?

Co-opting the issue of sexual harassment in Hollywood and trying to meld it with Jewish survival humor is the real failure here.

Yes, just like Jews, those sharing their stories of harassment, and many of those reading them, also need a narrative that will be helpful for surviving, for enduring. Maybe it should be a humorous one filled with similar gallows humor. Maybe it shouldn't be. Whatever the case, it shouldn't be determined by an older, rich white man who clearly has problems processing what to say and what not to say about it.

Survivors and the women around them have to lead the way here. Indeed, they're already starting to. But it's still under construction, and all of us have to be patient while women comics work on it. Already, there are some laughs available, but not enough to provide any sort of sustained relief from the sadness and anger.

While we wait for that to come, it's important that we not let others co-opt the territory. More or less, David tried to horn in on the survivor narrative just as its beginning to have its necessary moment in the spotlight and before women in comedy have found a reliable way to discuss it. That was his real sin here.

#MeToo has a right to discover its own brand of survival humor. That David didn't seem to realize that and, even at that, tried to approach it from a very '90s, very masculine view of the world shows that — as funny as he still can be — he may already be a comedian who is past his time.