This election is all about casting aside immigration Trumpism

In a last-ditch gambit, GOP candidates in New Jersey and Virginia reach for ugly, Trumpian lies about immigrants 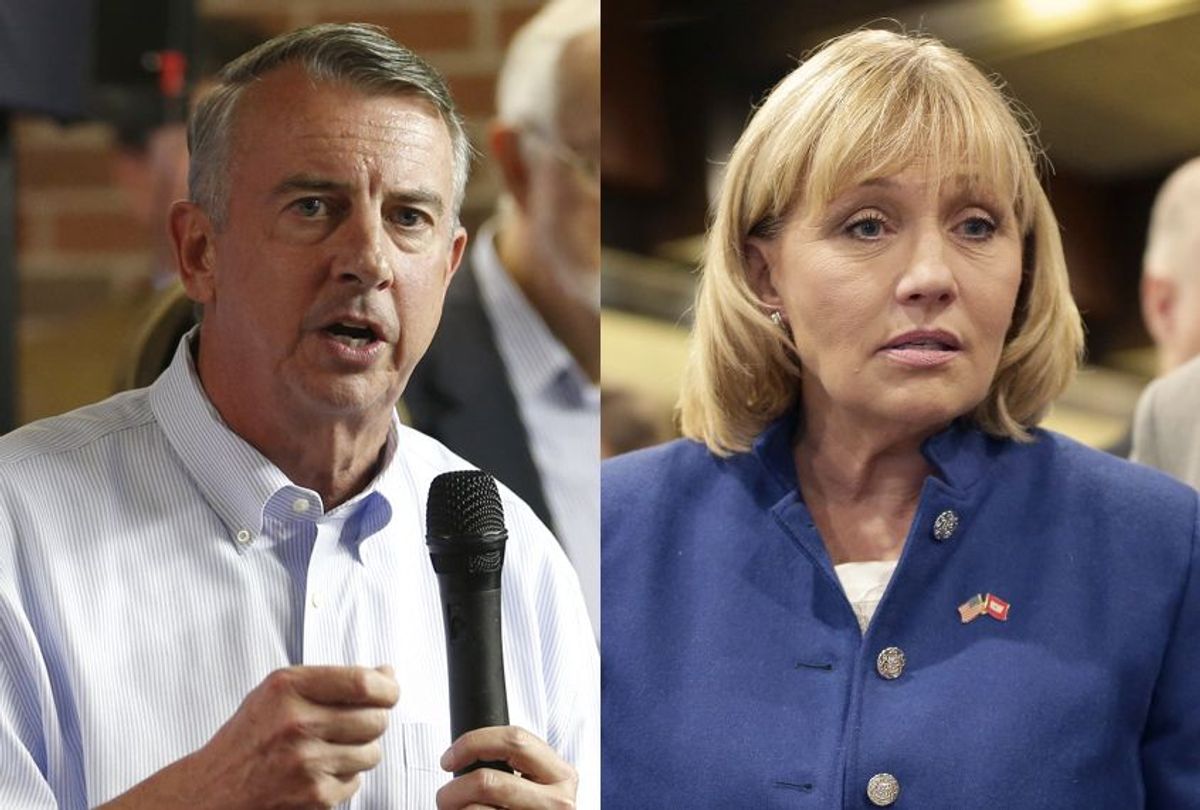 On Tuesday, voters in New Jersey and Virginia are heading to the polls to pick their next governor, and there’s a Willie Horton flashback -- with a Trump twist -- in play in both states. Kim Guadagno, New Jersey's Republican lieutenant governor, and Ed Gillespie, the GOP nominee in Virginia, used their final campaign push to link their Democratic opponents to MS-13, the violent Salvadoran drug gang. This line of attack claims that support for "sanctuary cities," as expressed by Democrats Phil Murphy in New Jersey and Ralph Northam in Virginia, is equivalent to endorsing the harboring of violent illegal aliens.

It should now be clear, based on the tenor of these two bellwether races, that despite all the handwringing by MSNBC’s pet Republicans, President Trump’s nativist and anti-immigrant fear-mongering has executed a flawless takeover of the Republican Party’s soul. What else can you do when your message of "We’ll lower your taxes" is not getting the job done?

In off-year elections, when turnout is likely to be soft, the key to victory is activating the most angry and fearful in your base. So the Guadagno campaign in New Jersey, running double digits behind Murphy in the polls, had no other play to make other than to run ads linking the Democratic nominee to convicted murderer Jose Carranza, a Peruvian immigrant whose 2007 killing of three teenagers on a Newark playground outraged the entire state.

It does not matter to the GOP fear-mongering machine that in urban centers like Newark, Paterson and Camden, where a high percentage of New Jersey’s 500,000 undocumented residents live, overall crime is actually down. It is precisely this influx of immigrants that has helped to stabilize neighborhoods, as well as staunch an overall state population decline that has seen New Jersey's congressional delegation shrink from 15 to 12 over the last 30 years.

Across the Hudson in New York, a sanctuary city that also has at least half a million undocumented residents, their presence has come with an unprecedented decline in violent crime and a related explosion in property values. Donald Trump has experienced that first-hand, in the value of his New York real estate portfolio. It’s hard to do justice to the decline in violent crime in New York. It has come over the arc of my career as a journalist, largely as a result of community policing that engages neighborhoods. In 1990, 2,262 murders were reported in the city. Last year there were 330.

What New York and other so-called sanctuary communities have learned is that by reducing the fear factor in immigrant neighborhoods, law enforcement gets a higher rate of cooperation in ferreting out violent criminals, who usually prey on their own communities.

The purported linkage between undocumented immigrants and a propensity for criminal behavior has been widely debunked, yet Trump rode that hobby horse all the way to the Oval Office. In a 2015 report from the National Academy of Sciences, researchers concluded that “immigrants are in fact much less likely to commit crime than natives, and the presence of large numbers of immigrants seems to lower crime rates. . . . This disparity also holds for young men most likely to be undocumented immigrants: Mexican, Salvadoran, and Guatemalan men.”

The report continued: “Today, the belief that immigrants are more likely to commit crimes is perpetuated by ‘issue entrepreneurs’ who promote the immigrant-crime connection in order to drive restrictionist immigration policy.”

The Cato Institute, a libertarian think tank, reached similar findings in a report earlier this year. “Empirical studies of immigrant criminality generally find that immigrants do not increase local crime rates and are less likely to cause crime than their native-born peers, and that natives are more likely to be incarcerated than immigrants,” Cato researchers concluded.

In 2015 the American Immigration Council issued a report entitled “The Criminalization of Immigration in the United States.” The council's researchers found that between 1990 and 2013, the foreign-born share of the U.S. population increased from 7.9 percent to 13.1 percent, and the number of unauthorized immigrants went up from 3.5 million to 11.2 million. At the same time, the rate of violent crime (murder, rape and aggravated assault) decreased by 48 percent, while property crime rate fell by 41 percent, according to FBI data.

Thousands of undocumented immigrants have enlisted in the United States military at a time when experts say the country is not generating a sufficient number of eligible young Americans to meet recruiting  targets. According to a 2015 report commissioned by Mission: Readiness, a nonprofit, nonpartisan national security organization made up of 500 retired generals and admirals, 75 percent of the nation’s young adults are unqualified for military enlistment. The study concludes that three top reasons why our young American adults don’t make the grade are that they have been poorly educated, have disqualifying criminal records or are physically unfit or have other health issues. A quarter of young Americans of recruiting age lack a high school diploma, and most of the dropouts who went on to get their GED “do not possess sufficient math or reading skills to qualify,” according to the report.

In New Jersey, undocumented immigrants paid close to $600 million in state and local taxes, according to the Institute on Taxation and Economic Policy. In 2013, analysts at the Social Security Administration calculated that undocumented immigrants had paid $13 billion into the system in the year 2010 and earned $34,000 a year, on average, at the time. From 1996 to 2003, undocumented workers paid a combined $90 billion into both Social Security and Medicare. Across the country, close to one in three undocumented households own their own homes. Cumulatively, those households pay $3.6 billion in property taxes.

The purpose of a sanctuary city designation is to keep the families of Americans intact. Between 2010 and 2014, one in 11 children in New Jersey was a U.S. citizen who was living with at least one undocumented family member. At least 500,000 citizens in New Jersey fit that description, and more than 60 percent of undocumented immigrants have lived in the state for a decade or longer.

Often their reasons for migrating were tied to destructive U.S. free trade policies that gave American farmers the edge on export commodities like corn, a crop that formerly permitted small farmers in Mexico and Central America to earn a living. Others are here to escape the violence of the drug cartels that feed America’s insatiable addictions. Objective evidence tells us these folks are not "criminal aliens." They are our relatives, our neighbors and our children’s classmates.