Ignore Republican denials: Democrats’ big win in Virginia is the start of an anti-Trump wave

Ed Gillespie's "Trumpism without Trump" gets wiped out in a Democratic sweep. Leading edge of a 2018 tidal wave? 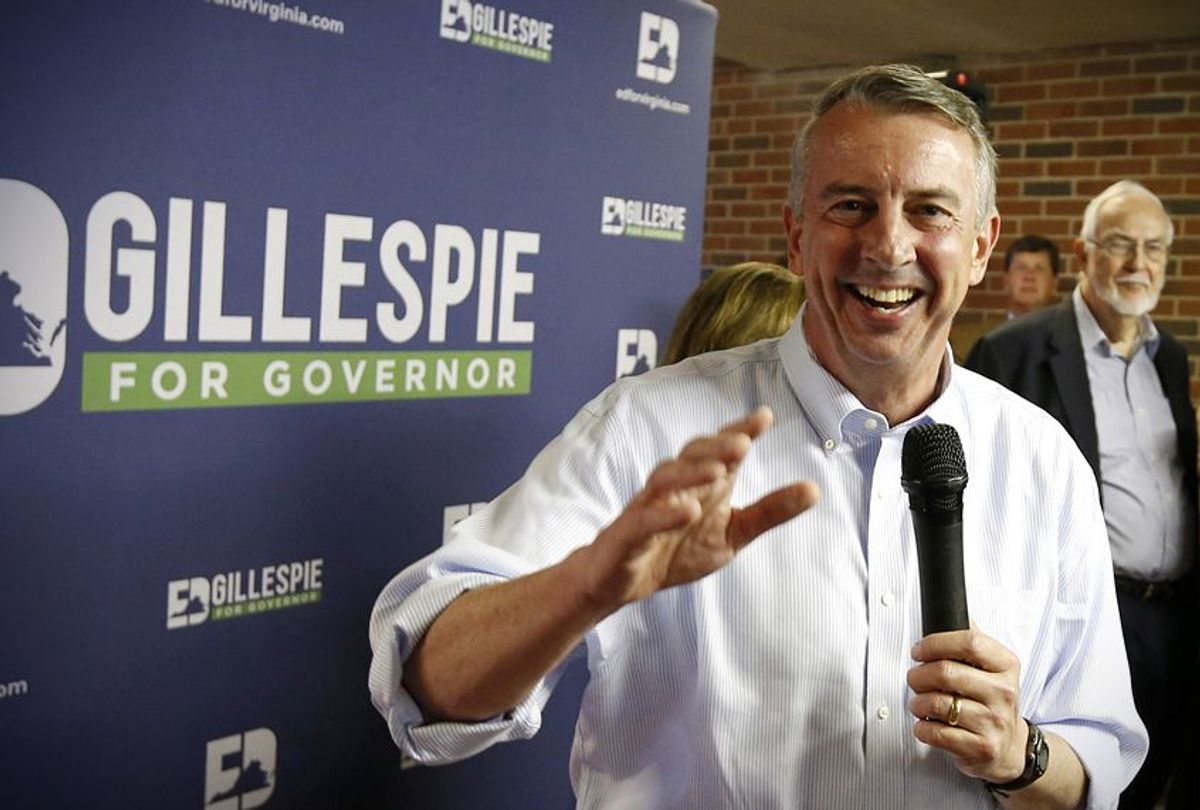 The first national election since Donald Trump took office turned out to be the best night for Democrats since that fateful election one year ago.

Democratic sweeps in multiple states across the country Tuesday night certainly left Trump shaken (he was quick to tweet his own bizarre form of damage control from Asia) but it was perhaps an even more crushing defeat for Scott Walker. During his first performance as the head of the Republicans’ Governor Association, the Wisconsin governor presided over a pair of GOP losses that hardly bode well for the party’s chance in 2018.

Walker sank $10 million into the Virginia governor's race, which was widely expected to be a squeaker, only to watch Democratic Lt. Gov. Ralph Northam go on to win by the biggest margin in decades. Tuesday’s election results only made clear that Virginia is now a blue state.

Shortly after the supposed nail-biter of a gubernatorial election ended, with all major news organizations calling it for Northam less than an hour after polls closed, it became apparent that Virginia was poised to elect a sweep of Democrats to nearly every office on the ballot. Republican nominee Ed Gillespie, whom former White House chief adviser Steve Bannon described last week as “Trumpism without Trump,” got clobbered, giving Virginia its fourth straight Democratic governor. The Commonwealth also voted for Hillary Clinton over Trump last November and was carried twice by Barack Obama.

In Maine, voters elected to expand Medicaid, over the objections of Gov. Paul LePage, a Trump-like Republican, through a ballot initiative. The surge of Democratic pickups in Virginia’s House of Delegates following Tuesday’s election will likely make Medicaid expansion possible in the commonwealth for the first time since the Affordable Care Act was passed. The last time Virginia Democrats even picked up more than one state-house seat in an election was 2007.

“This isn’t a wave. This is a tsunami,” Virginia House of Delegates Democratic leader David Toscano told reporters Tuesday night.

Republicans began the day with a 66-34 supermajority — which they themselves gerrymandered in place in 2011. Late on Tuesday night, it appeared that Democrats had won at least 13 seats, including several in districts that weren't believed to be in play. This still leaves them short of an outright majority, but as the Washington Post’s Dave Weigel noted, Democrats will now “have veto power over Virginia's next post-census electoral map for the first time since 1991.”

What was the Trump effect?

Despite the spin from President Trump and his media sycophants -- essentially, that Ed Gillespie wasn't Trumpy enough -- Tuesday’s election looks from here like a stinging rebuke of his presidency.

In Virginia, voters told ABC News’ pollsters by a two-to-one margin that they were casting their ballot to show opposition to Trump rather than support for him. In New Jersey, the margin was three to one. Exit polls in Virginia showed that 47 percent of voters “strongly disapproved” of Trump and 95 percent of those voters voted for Northam, the Democratic candidate. In New Jersey, 57 percent of voters disapproved of Trump and 89 percent of them voted for Democrat Phil Murphy.

"I don't know how you get around that this wasn't a referendum on the administration," Republican Virginia Rep. Scott Taylor told the Guardian.

Predictably, Gillespie avoided any mention of the president during his concession speech Tuesday night — as he often did during his campaign appearances — but there is evidence that Trump would have further hurt the Virginia Republican if he had done any more than send supportive tweets. While even Republican-controlled state-house districts with no Democratic challenger saw an increase in the Democratic vote share over 2013, GOP-held districts with a Democratic challenger saw an average 20 percent increase on Tuesday. The Washington Post reported that Fairfax County in northern Virginia, the commonwealth's most populous county, easily surpassed its 2013 turnout level.

Beyond the Democratic pickups, progressive candidates were Tuesday’s biggest winners.

While the party is far from working through the lessons learned from last year’s tough loss, and the preceding eight years of a Democratic president, several veterans of both Bernie Sanders’ and Hillary Clinton’s campaign came together and tuned out the Donna Brazile bombshells of last week to guide the final days of this year’s campaigns towards victories.

Democrat Danica Roem defeated longtime anti-LGBT incumbent Republican Del. Bob Marshall in Virginia to become the first out trans state legislator in America. Democrat Chris Hurst unseated Republican Del. Joseph Yost in Blacksburg, Virginia, typically a conservative region. Hurst had given up his job as a television reporter to run against a Republican with an “A” NRA rating after Hurst's girlfriend, Allison Parker, was shot and killed on live TV.

Democrats will go from zero to two black lieutenant governors, Justin Fairfax in Virginia and Sheila Oliver in New Jersey, as a result of Tuesday’s victory. The city of Charlotte elected its first female African-American mayor, and Bill de Blasio, running virtually unopposed, became the first Democratic mayor of New York to win re-election since Ed Koch in 1985. In Knoxville, Tennessee, self-described democratic socialist Seema Singh Perez won a seat on the city council. In Philadelphia, voters chose a real reformer and civil rights lawyer as the city’s top prosecutor.

Leading edge of a Democratic wave?

The first hints of Democrats’ 2006 midterm wave came a year earlier when Democrats recaptured control of the Virginia State Senate in 2005. One year before the first midterm election since Republicans won full control of the federal government, Democrats can again look to the Old Dominion as the edge of a wave.

In a national CNN poll this week, 48 percent of Americans said they strongly disapproved of President Trump. If those voters behave the way voters in Virginia did Tuesday, Democrats have a lot to be excited about for a change. Two Republican candidates for governor ran Trump-like, anti-immigrant campaigns, and both were conclusively defeated.

Gillespie ran a race that basically echoed Breitbart's racism and anti-immigrant fear-mongering, even as the "alt-right’s" paper of record is once again casting him off as a member of the “establishment.”

“It’s hard to see Ed Gillespie as a Trump candidate,” Tucker Carlson reassured viewers on Fox News, shortly after Northam was declared the winner in Virginia.

Whether Gillespie’s campaign explicitly embraced Trump or not, Virginia voters appeared to have the president top of mind when they voted for Democrats up and down the ticket. How many Republicans in Congress will look at Virginia and have second thoughts about tax reform and the rest of the Trump agenda? Some will surely conclude it's time to look for a 2018 lifeline.