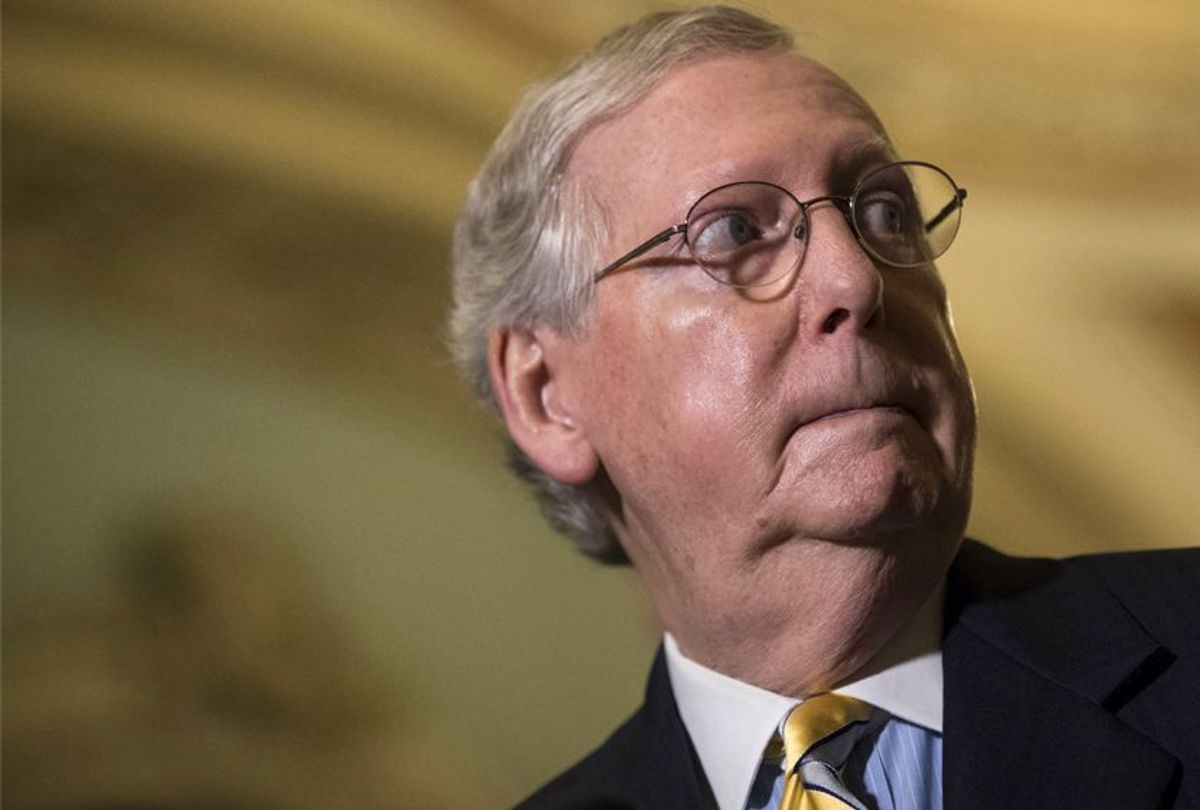 Last week, Donald Trump yet again made one of those comments that should have set off a five-alarm fire, but didn't. Trump complained to a radio interviewer that it was the "saddest thing" that he could not force the FBI to prosecute Hillary Clinton for a litany of complaints he has made against her. Nothing on Trump's list of alleged misdeeds, mind you — "her emails and with the dossier, and the kind of money" (whatever that means) — comes anywhere close to being a crime. Indeed, despite three decades of obsessive right-wing investigations, Republicans have never come up with any hard evidence of Clinton's supposedly criminal behavior.

"I’m not supposed to be doing the kinds of things that I would love to be doing," Trump said, apparently meaning his inability to lock up people on a whim. "And I’m very frustrated by it.”

"We have grown accustomed to ignoring our president, or to assuming others will keep him contained," Ezra Klein at Vox wrote in response. In part, he added, this is because the "courts have, thus far, served as an effective check on his impulses."

But there's good reason to fear that the ability of the courts to work as a check on Trump's more fascistic desires is quickly being eroded. That's because Senate Majority Leader Mitch McConnell and Sen. Chuck Grassley, who chairs the Senate Judiciary Committee, have set up a factory-style assembly line for Trump's judicial nominees and are getting them confirmed at a dizzyingly fast rate.

Trump's big problem so far is that he's "not winning" in the courts, Sharon McGowan, the director of strategy for Lambda Legal, told Salon. "So the way he wants to start winning is changing the refs.”

In part, the president can do this because McConnell deliberately created numerous vacancies in the federal courts during Barack Obama's presidency. McConnell's decision to stall the confirmation hearing for Judge Merrick Garland, Obama's highly qualified Supreme Court nominee, got some attention, although that was largely drowned out by the daily horror show of the presidential campaign. The fact that McConnell was doing the same thing for numerous other seats on the federal judiciary, in hopes of holding them open for a Republican president, barely got any attention in the media. McConnell stalled so much on confirming Obama's nominees that Obama pretty much gave up on sending nominees to the Senate.

Well, the strategy worked. By the time Trump got to office, there were 103 judicial vacancies in the federal courts. Now, of course, McConnell's strategy has completely changed. Instead of finding every reason to slow the process down, McConnell and Grassley have gotten creative about how quickly they can cram these appointees through the confirmation process.

Last week, Sen. Sheldon Whitehouse, a Democrat from Rhode Island, complained during a short hearing where four separate nominees were being questioned:

Our Senate Judiciary nominations hearings, I believe, have become something of a joke. Nominees come to us readied for our hearings by "murder boards" that taught them how to withstand all five minutes of questioning by senators. Nominees are often packed into panels, so a senator’s five minutes get spread across multiple nominees. The questioning of nominees is often simple and rote.

This fast-track process is accomplishing various things, including helping to hide the fact that Trump's judicial appointees are mostly right-wing extremists. The nominees endure very little questioning and are able to present themselves as impartial and respectful of precedent. There's strong evidence that isn't true at all.

For instance, two judges who got rapid appointments at the end of October, Amy Coney Barrett of the Seventh Circuit in Chicago and Joan Larsen of the Sixth Circuit in Cincinnati, have extremely radical views on the record. Barrett is a radical anti-choicer, who not only rejects the legal arguments behind the Roe v. Wade decision but also takes a dim view of contraception access. Larsen takes a broad view of executive powers, arguing that the president can break laws banning things like torture if he believes doing so protects the nation. This is a particularly frightening position given Trump's public record of longing for dictatorial powers.

When Obama was president, he appointed someone for the Seventh Circuit seat Barrett now occupies. But McConnell blocked the nomination, "stealing" the seat just as he stole Garland's Supreme Court seat for Trump and Neil Gorsuch.

Last week, the Senate pushed through two more right wing extremists. Stephanos Bibas, who will serve on the Third Circuit in Philadelphia, wrote a 2009 article in which he literally argued in favor of "putting offenders in the stocks or pillory" so the public "could jeer and pelt them with rotten eggs and tomatoes." He has since claimed to disavow these beliefs, but as People for the American Way pointed out, this idea was no lark. Bibas not only wrote a heavily researched 61-page proposal for this neo-medieval proposition, he spent months traveling from state to state to present this idea.

The other confirmation, Allison Eid of the 10th Circuit in Denver, has gone out of her way to deny due process to criminal defendants, as well as basic First Amendment protections against government establishment of religion.

But there's almost no time to absorb those atrocities, still less to combat them. McConnell has another nominee lined up: Leonard Steven Grasz, whom Trump has named to the Eighth Circuit in St. Louis. Grasz is an anti-choice and anti-gay fanatic whom the American Bar Association has unanimously declared unqualified. Pamela Bresnahan of the ABA explained that the bar believes Grasz "would be unable to separate his role as an advocate from that of a judge," specifically noting his belief that lower courts can reject abortion rights rulings the judges don't like. This is only the third time since 1989 that the ABA has declared a nominee unfit to serve. In the previous two cases, the nominees were not confirmed.

“People can get worked up about Cabinet nominations," McGowan said, but those are people who "at best, will serve for the term of the presidency, which could be four, maybe eight years." But federal judges have lifetime appointments and can spend their entire careers chipping away at human rights and shoring up the powers of the chief executive, whether that's Donald Trump or some more competent future autocrat.

If liberals sometimes overlook the importance of the courts, rest assured that conservatives do not. That's why McConnell has been so focused on both blocking Obama nominees and rushing Trump's nominees through a sped-up process. This was also an issue that came up frequently during my conversations with delegates at last year's Republican National Convention. If you asked a delegate about Trump's problems with temperament, intelligence or inexperience, he or she would often respond by saying, well, yes, but they really want those right-wing judges. Whatever else may happen with Trump, those wishes have been granted.