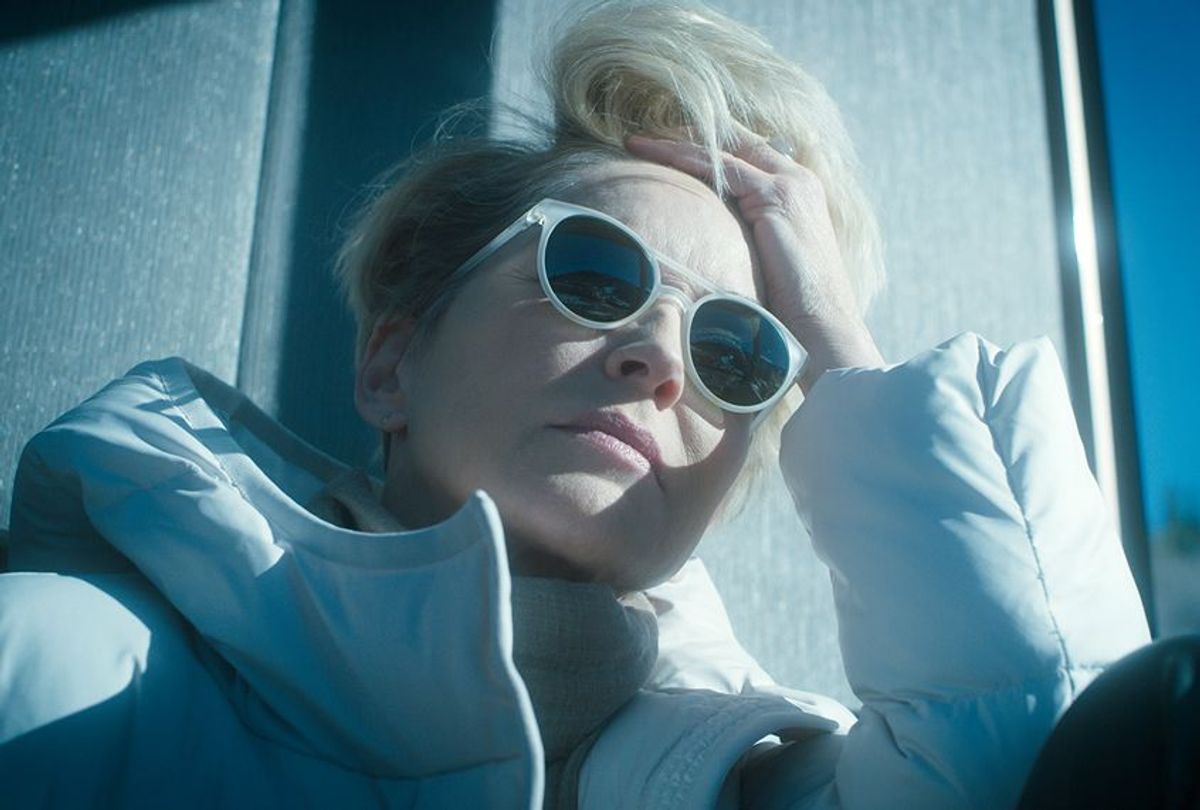 Steven Soderbergh famously announced he was quitting the world of film directing a few years ago, but what he was really announcing was his intent to wander with the cinematic medium. But even in his initial round of sayonara interviews, he hinted that his departure wouldn’t necessarily be permanent. (Case in point: "Logan Lucky.") The problem was never movies, you see.

“The tyranny of narrative is beginning to frustrate me, or at least narrative as we’re currently defining it,” he told Vulture in 2013. “I’m convinced there’s a new grammar out there somewhere.”

Skip ahead a few years in this particular storytelling node — a term to be explained later — and we have “Mosaic," a navigable murder-mystery presented as a branching narrative, and designed to be experienced via mobile app.

Originally developed for HBO and designed by software company PodOp, “Mosaic” became available to iOS platform users on Wednesday — an Android-compatible version will soon follow, HBO assures us — but Soderbergh and writer Ed Solomon have been developing it for three years. For consumers willing to wait for the standard experience, HBO also is airing “Mosaic” as a six-episode limited series that debuts Monday, January 22.

While Soderbergh admits that the branching narrative approach to storytelling is nothing new, he has visions of “Mosaic” being used as an open-source platform for writers and producers to innovate serialized storytelling.

The graveyards of entertainment and technology are littered with the bones of the latest disruption in the small screen artform, and certainly “Mosaic,” though ambitious looking and smoothly presented at a recent live demo that took place in Seattle, could very well join those piles.

But it does look like a fascinating way to interact with a drama as opposed to passively absorbing one, and its seven-hour commitment is modest even by binge-watching standards.

If “Mosaic” catches on with users, it could open up an original space in a medium that’s witnessed significant stylistic evolutions in storytelling while adhering to the same mode of delivery, more or less, since its inception. Branched narrative and interactive stories have long been an experience left to the realm of video games. Netflix launched its own interactive experiment over the summer with the kid-friendly programs "Puss in Book: Trapped in an Epic Tale" and "Buddy Thunderstruck: The Maybe Pile," animated offerings tailored to follow a version of the classic "choose your own adventure" format.

As Soderbergh points out, he and Solomon may be the first mainstream director and producer to drill down on engineering a live-action drama with a sizable budget to fit the interactive experience.

“I feel like people who are kind of hanging on to something that doesn’t have the same sort of primacy that it did when I was growing up, that’s like being a climate change denier,” he told a small audience gathered Monday night for a demonstration and question and answer session at HBO’s Seattle offices. “This is where we are. If you can’t embrace that and figure out how to tell stories that people can experience like this, I think you’re going to be lonely.”

The “Traffic” and “Ocean’s Eleven” director initially unveiled the app at the Future of StoryTelling Festival in New York in October. The Seattle event, moderated by GeekWire co-founder Todd Bishop, was primarily attended by members of the tech community. Tellingly, many of the queries during the demo’s question and answer session asked Soderbergh to explain the ways that this new presentation differs from standard television storytelling.

“What is this?” Bishop asked point blank, early in the hour, to which Soderbergh responded, “I don’t know. We haven’t come up with a word. . . it’s not a film. And it’s not a TV show. It’s kind of its own thing.”

Despite the celebrity firepower in the cast, Soderbergh’s goal is for “Mosaic” to be adopted as an open-source format to work in a new way. “People ask me, ‘Are you going to do another one?’ And I’m like, ‘Not until some other people do so I can see what they’re doing, so I can stand on their shoulders.’”

Soon after that, an audience member asked a relatively obvious question as to whether spinoffs of characters within “Mosaic” would be possible. “See, that’s an idea that none of us had ever thought of,” Soderbergh said. (Somehow that statement strains believability, but OK.)

The basic lowdown on the app show that is not a show or a movie but is its own thing, is this: “Mosaic” is a murder mystery that begins with Stone’s character Olivia Lake, a minor literary celebrity in the town of Summit, Utah. During the event, Soderbergh casually dropped what some people would call a major “spoiler,” which he assured us is not, but no chances will be taken here.

From there the story splits off into a number of nodes connected within a story map. Each node is basically a small episode with branches linking to other nodes, enabling users to choose the direction in which they want the narrative to proceed. Within each node are small points called “discoveries,” inviting a viewer to click and see another scene of backstory, or even documentation, that informs a particular development within the node. Once you’ve watched that, you can pick up where you paused in the original node and proceed with the scene in question.

When each node has wrapped, the viewer has a choice to proceed with the story via one character’s path, or to proceed with another. And while the experience itself is customized to the individual user, the outcome is not.

“If you think about anything that happens in your life, and then you think about how you might wanna tell your friend, or your roommate, or your spouse, or partner or whatever, you're basically picking a point of view,” Solomon told Salon after the panel ended. “Your telling of it has its own life. And your telling of it says almost as much about you as it says about the event itself.”

This he explains, is what the app’s execution seeks to do. “The linear [on-air] version is a furtherance of that. It's, ‘These events happened, and here's how Steven Soderbergh tells you it went.’”

In a separate one on one conversation with Salon, Soderbergh adamantly stressed that this is not a “choose your own adventure” tale that accentuates ambiguity, not confusion.

As it stands, the app is available on iOS for users to play with and determine its value, both in the short-term and in the longer-span of entertainment innovation. Anything entertainment meets with tech, there are glitches to be worked out, but Soderbergh seems fine with that.

“We’re still in the early days of trying to figure out, honestly, what do we do with this,” he said. “The first thing to figure out is, do people like it? Because if they don’t, then all conversations become moot.”