Governor Abbott has always pushed the NRA agenda, and he shows no sign of stopping 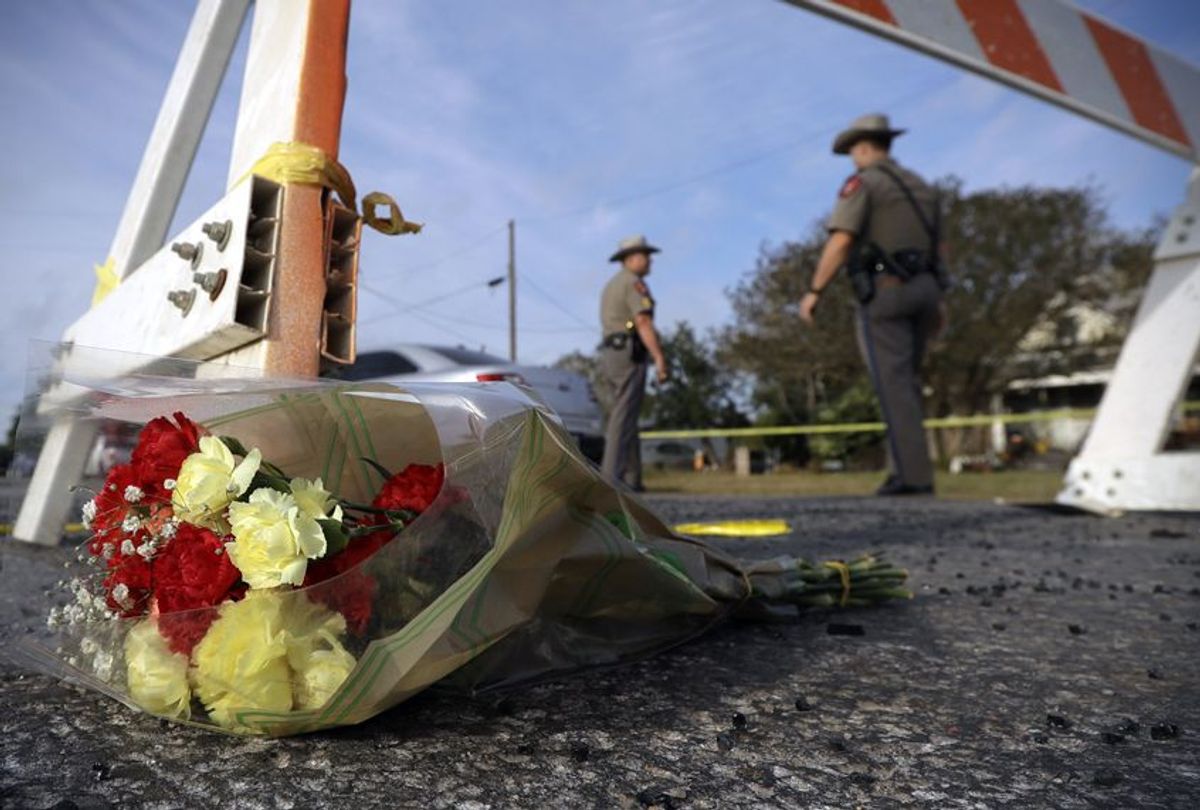 A bouquet of flowers lies at the base of a roadblock at the scene of the shooting at the First Baptist Church of Sutherland Springs, Nov. 6, 2017. (AP/Eric Gay)
--

The day after a gunman massacred 26 churchgoers in his home state, Texas Governor Greg Abbott said, when asked during a televised interview how America might stop the regularity of mass shootings, “You do that by working with god.”

It’s interesting that Abbott can’t seem to think of anyone else who can work on reducing gun violence in this country, especially since god's collaboration has yielded such poor results so far. Abbott is no stranger to collaborating with real, live, terrestrial humans in and out of politics to achieve legislative goals. He worked with his “blood brother” Ted Nugent, the openly racist author of songs about sex with 13-year-old girls, on his gubernatorial election campaign. He worked with North Carolina ex-governor Pat McCrory to scaremonger about transgender people’s right to go to the nearest bathroom. For quite a long time, Abbott has worked with Big Oil and Gas — huge spenders on his campaigns — to deregulate both industries, prohibit local fracking bans and ignore impending dangers of climate change such as Hurricane Harvey.

He has also worked tirelessly with, and on behalf of the NRA to oppose anything remotely approximating even the most benign gun control.

Partnership is a thing Abbott is totally familiar with. So when he—and the entire GOP—pretends he doesn’t have the faintest idea of how we might start tackling this mass shooting issue, it sounds like the gigantic lie that it is. Abbott has done nothing but bolster the gun lobby’s efforts since he entered politics, dating back to when he was Texas attorney general, and he has done so without shame or compunction. So as the governor acts confused and regurgitates NRA lines about “evil” (but not “terror”; that's saved for when the attacker is brown) let’s look back at eight times Abbott helped push the NRA agenda.

1. He cynically exploited children murdered at Sandy Hook to further his pro-gun agenda.

After 20 children and eight adults were killed in the mass shooting in Newtown, Connecticut, legislators in New York decided to take the obvious and rational step of passing gun control legislation. In response, Abbott bought up Google ads targeting New Yorkers and encouraging them to move to nearly gun-law-bereft Texas.

“Is Gov. Cuomo looking to take your guns? Sick of the media outing law abiding gun owns? Are you a lawful NY gun owner seeking lower taxes?” another asked.

“Here in Texas, you will have the liberty and the opportunity to achieve your dreams,” the ad continued. “You’ll also get to keep more of what you earn and use some of that extra money to buy more ammo. I hope to see you soon in Texas. In the meantime, sign up to show your support for our second amendment rights.”

As part of a statewide legislative effort that trades NRA dollars for the endangerment of lives, Abbott signed a bill in May that significantly makes gun licenses cheaper. According to the Texas Tribune, the law “reduces the first-time fee for a license to carry from $140 to $40 and the renewal fee from $70 to $40.” The bill signing was held at an actual shooting range, which is like pistol-whipping us all with overt symbolism. Afterwards, Abbott proved that while he loves the Second Amendment, he’s not so keen on the First.

"I'm gonna carry this around in case I see any reporters," the governor “joked.” The incredibly unfunny remark came just days after another Republican politician body slammed a reporter, which only upped his favorables with the GOP base.

Abbott later tweeted a photo of himself “celebrating” the bill’s passage by firing a gun at human-like shapes.

Here's how I celebrate signing a law that lowers the license to carry fee. #guns @NRA pic.twitter.com/eZbYd4jQIW

Back when he was still attorney general, but gearing up his pandering machine for a gubernatorial run, Abbott posted this ridiculous ad on his Facebook page. Aside from being wrong in a way that somehow manages to embody everything wrong with this country, it also manages to flub basic grammar rules. Just sayin’.

4. Was 'embarrassed' Texas was second in gun sales.

In 2015, Abbott tweeted this (it turns out, erroneous) article claiming that Texas was second to California in background check requests for new gun purchases. Along with the link, Abbott wrote, "I'm EMBARRASSED: Texas #2 in nation for new gun purchases, behind CALIFORNIA. Let's pick up the pace Texans. @NRA blog.chron.com/narcoconfident…"

The message includes a shoutout to the NRA, because passing laws to put guns in the hands of every Texas man, woman and child isn’t enough, apparently. When the NRA buys a politician, they want a little something extra to show for their money.

5. Expanded open-carry, made it easier for mass shootings to take place on college campuses.

During another dignified bill signing held at a shooting range (you know, just like the Founding Fathers envisioned), Abbott passed two pro-gun laws in a single sitting. The first bill allowed licensed gun owners to openly carry their weapons. The second helped ensure that Texas college students will forever have to worry that being shot on campus is a distinct possibility.

“I don’t think there are any groups in this state — or in this nation — who worked as profoundly to ensure that the Constitution is lived up to,” Abbott said of his masters at the NRA.

6. Proudly used social media to announce you can be shot at any moment in Texas.

7. Also used social media for this kind of toxic ammosexual macho posturing (and conspiracy mongering) because President Obama proposed we consider reducing the number of killing machines in this country.

8. Actively stopped a Texas county from trying to keep guns out.

The Center for American Progress recounts this story from Abbott’s days as Texas AG, when he made it impossible for a county to implement commonsense protections against gun violence.

Travis County, Texas was recently considering a proposal to keep gun shows out of county-owned facilities such as the convention center in Austin. A concerned citizen had warned the county commissioners in December 2012 that more guns could flood the area due to the “gun show loophole,” which allows purchasers of guns at gun shows to avoid federally mandated background checks. Abbott warned the county to “be ready for a double-barreled lawsuit” if they declined to host the gun shows, so the county backed off; the Austin convention center hosted the first of a series of gun shows on January 26, 2013.

Abbott also spearheaded an amicus brief on behalf of dozens of state attorneys general in McDonald v. Chicago, a case in which the U.S. Supreme Court struck down Chicago’s law banning handguns.