In a speech on Tuesday, the former UN secretary-general called on the U.S. to fight "powerful interests" 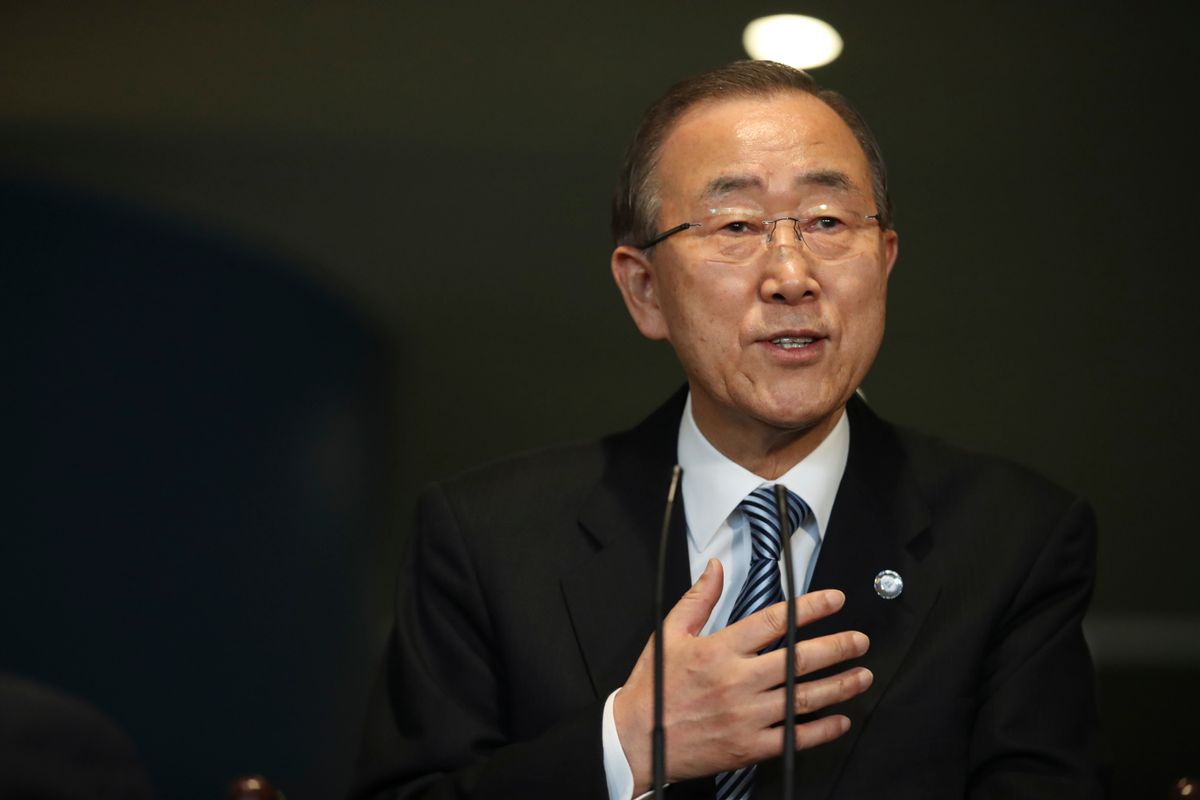 Former United Nations Secretary General Ban Ki-moon urged Americans to rally around universal health care and stand up to "powerful interests," during a speech in New York City on Tuesday.

Ban said "powerful interests" have prioritized "profit over care" and that Americans must move towards a publicly funded system that would put it in line with the rest of the developed world, The Guardian reported. Roughly 28 million in the U.S. remain without health care coverage, despite the passage of the Affordable Care Act and the fact that the U.S. spends more on health care than any other country.

"In the US, all too often only rich people get access to expensive life-saving treatments," Ban said. "This is unjust and threatens everybody’s health when working- and middle-class people with communicable diseases cannot afford treatment for their infections."

He continued, "Even routine preventive care is often prohibitively expensive,” said Ban. “As America is demonstrating, you simply cannot reach universal health coverage if your health system is dominated by private financing and ultimately functions to prioritize profit over care."

Universal health care seemed to be a fantasy up until recently in the U.S. The movement to expand access has seen a resurgence in popularity following the presidential campaign of Sen. Bernie Sanders, I-Vt., who also happens to be consistently at the top of the polls as the nation's most popular politician. In September, Sanders rolled out his Medicare for All Act of 2017, and several Democrats — some being prospects for the 2020 election — quickly signed on board with the proposal. At the time, Sanders said, "this is where the country has got to go."

He added, "Right now, if we want to move away from a dysfunctional, wasteful, bureaucratic system into a rational health-care system that guarantees coverage to everyone in a cost-effective way, the only way to do it is Medicare for all."

Congressional Republicans, on the other hand, have repeatedly failed to muster up enough votes to repeal Barack Obama's signature health insurance law, despite their control over both legislative chambers.

Of the 25 richest nation's in the world, the U.S. is still the only one to not provide health care to its citizens universally, The Guardian reported. However, the top three billionaires in America, hold the combined wealth of roughly 160 million Americans, highlighting how concentrated wealth in the country has become.

In his speech, Ban also linked the inefficacies of U.S. health care to the victims of national tragedies such as the recent mass shootings in Las Vegas and a Texas church.

"It simply breaks my heart to see victims of tragic mass shootings then be potentially bankrupted because they cannot afford the hospital and recovery bills," Ban said. "This is one of the clearest indictments of America’s health system today."

The speech, given at an event titled "Health for All: #WalkTogether," marks a major push from the international community, and perhaps the first of its kind. The event was organized by The Elders, which consists of global leaders advocating for human rights across the globe, according to The Guardian.

The organization was founded by Nelson Mandela and is currently chaired by Kofi Annan, another former secretary-general of the U.N.

"We think this is the very first time that the global community has engaged so directly with the US healthcare debate," Robert Yates, a political health economist and universal health care expert at the international think tank Chatham House said. "The World Health Organization is thinking as well about how we can help here in the US."

It's quite telling that the U.S. — often the self-proclaimed beacon of freedom and democracy — requires a global effort to aid its citizens in a fight against the immensely powerful health care industry as well as lawmakers from both political parties, who have blocked any and all efforts to establish a publicly funded health care system in the country.