GOP lawmaker suggests Moore's accusers be prosecuted: "They are guilty of allowing him to exist for 40 years" 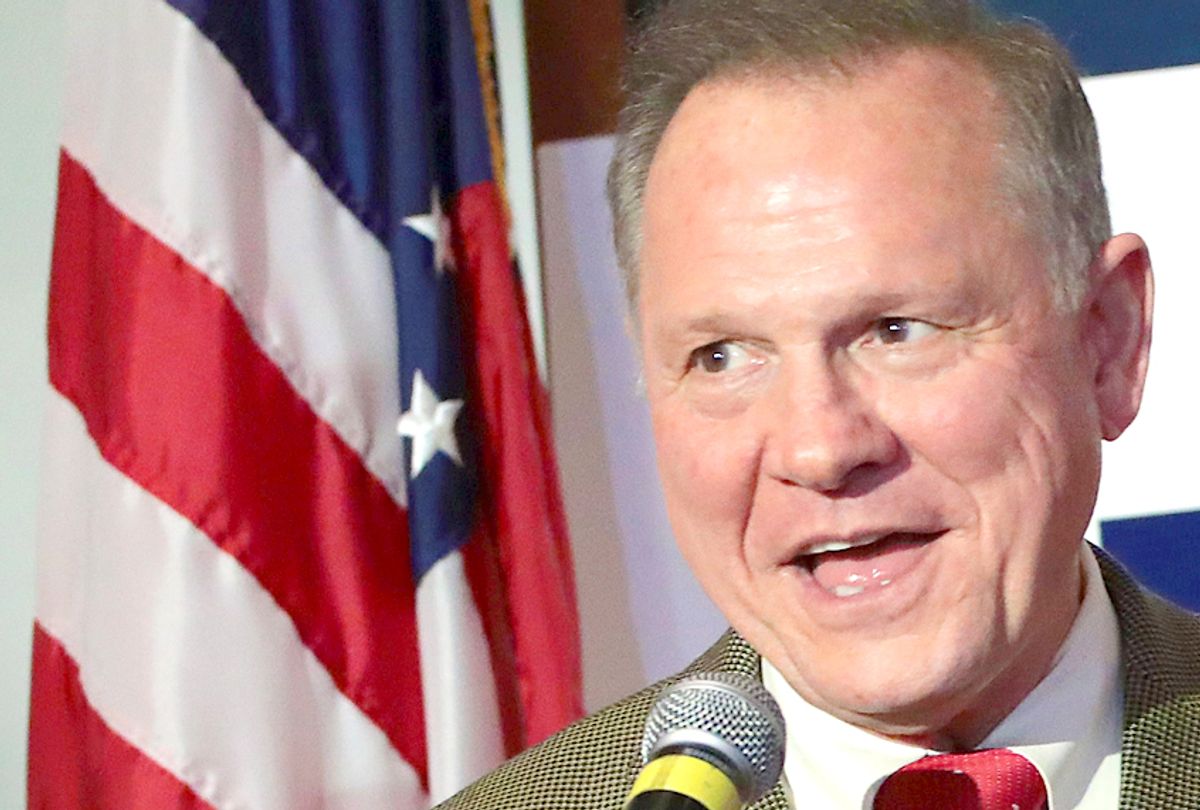 The Washington Post's bombshell report that Alabama Senate candidate Roy Moore pursued romantic relationships with teenage girls continued reverberating throughout politics on Friday with the National Republican Senatorial Committee formally telling government regulators that it would not be contributing funds toward his campaign.

Most national Republicans have been taking a line that Moore should end his campaign "if the allegations are true" but some, including retiring Arizona Sen. John McCain and former GOP presidential nominee Mitt Romney, have said that Moore should step down.

"Innocent until proven guilty is for criminal convictions, not elections. I believe Leigh Corfman," Romney tweeted Friday morning, referring to the woman who had accused Moore of molesting her when she was 14. "Her account is too serious to ignore. Moore is unfit for office and should step aside."

And yet, many local Republican supporters of Moore and his Breitbart News booster Steve Bannon have remained obdurate that their candidate did nothing wrong and is merely being slimed by the fake news media. Some are finding ever-more disgraceful ways to stand by their man.

Ed Henry, an Alabama state representative took the cake in remarks made to a local newspaper in which he condemned the three women accusing Moore for not speaking out sooner, adding that Moore's alleged victims deserved to be prosecuted. Repeating a frequent refrain of the far-right, he blamed "the establishment" Republicans for the allegations.

“If they believe this man is predatory, they are guilty of allowing him to exist for 40 years. I think someone should prosecute and go after them. You can’t be a victim 40 years later, in my opinion,” Henry told the Cullman Times.

Prominent fundamentalist evangelical Jerry Falwell Jr. came to Moore's defense in a statement which claimed that the word of a twice-censured former judge outweighed the Post's careful account based upon interviews with more than 30 people.

“It comes down to a question who is more credible in the eyes of the voters — the candidate or the accuser,” Falwell Jr. told the Religious News Service.

Alabama State Auditor Jim Zeigler cited the Bible in an attempt to justify an adult seeking sexual relations with a child.

“Take Joseph and Mary. Mary was a teenager and Joseph was an adult carpenter. They became parents of Jesus," Zeigler told the Washington Examiner.

Others on the far right have responded to the report by trying to smear the accusers or even the Post reporters themselves.

Alex Jones, the radio host who was known for talking about alien takeovers before becoming interested in Republican politics, spread false and unsubstantiated claims on his Infowars website that the women alleging improper conduct by Moore were being paid.

"There's a claim spreading on social media that a reporter was taped while reportedly offering a woman $1000 to accuse Senate candidate Roy Moore of sexual improprieties," he tweeted. The Infowars article Jones linked cited tweets from unknown individuals claiming second-hand knowledge of recorded audio between a Post reporter and one of Moore's accusers.

Moore's family has also gotten into the defense act. According to CNN, his younger brother, Jerry, compared Roy Moore to Jesus Christ and said that he was being unfairly persecuted.

The former judge also enlisted his wife Kayla Moore in a Friday appeal which sought to blame Satan for the allegations.

"I'm sure you've seen the attacks launched against my husband by the forces of evil trying to rip apart our nation," she told Moore's fans in an email fund-raising message.

"Roy's been through the fire before," she continued. "He needs you right now.

In a conversation with conservative radio host Sean Hannity on Friday, Moore claimed that he did not remember dating teen girls while in his 30s. He denied having any interactions with Corfman.

Hannity defended Moore on his Fox News show the night before by suggesting that Moore's accuser was lying in search of a big payday: