It's strange to defend Bush, whose policies were largely incoherent and terrible. But he never disgraced the office 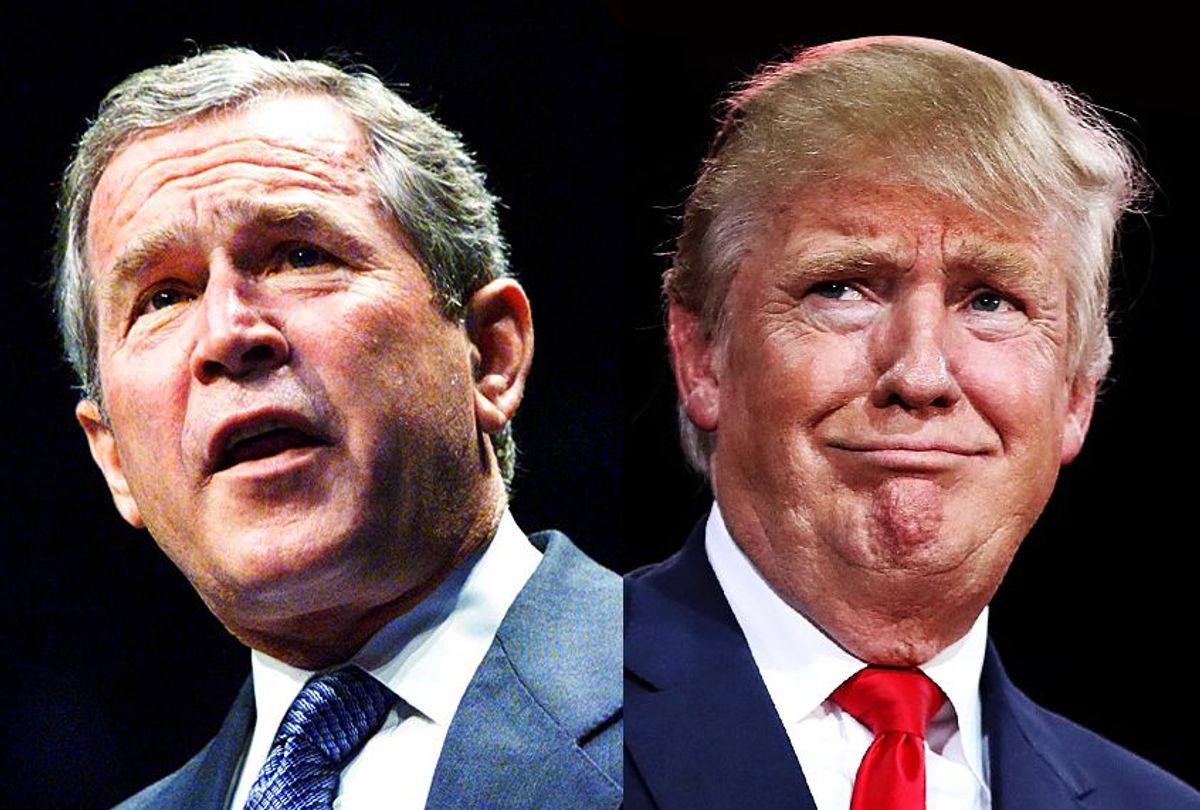 George W. Bush was a terrible president. Less than one year into his term, Donald Trump is a far worse one.

It's a shame that Republican leaders seem unwilling to see this. When House Speaker Paul Ryan was asked earlier this week whether he would choose the leadership style of Bush or Trump, he replied, "We already made that choice. We’re with Trump."

Ryan added, "We already made that choice. That’s a choice we made at the beginning of the year. That’s a choice we made during the campaign, which is we merged our agendas. We ran on a joint agenda with Donald Trump. We got together with Donald Trump when he was President-elect Trump and walked through what is it we want to accomplish in the next two years. We all agreed on that agenda. We’re processing that agenda."

Competence matters. While Trump apologists like to claim that he hasn't had enough time to do anything as president, by this time in his administration Bush had already passed sweeping tax cuts (the Economic Growth and Tax Relief Reconciliation Act of 2001) and education reform (the No Child Left Behind Act of 2001). After the terrorist attacks on Sept. 11, Bush had managed to launch a military operation in Afghanistan to root out the perpetrators.

I'm not saying that these policies were effective. Indeed, I actually think all three of them were far inferior to the economic, education and foreign policies that would have been implemented by Al Gore had he been allowed to serve after the 2000 election. But a president must be measured not only by the specifics of his or her policies, but also by the raw ability to actually get things done. By that metric, Bush decisively beats Trump.

2. Bush didn't inflame bigotry to nearly the extent that Trump did.

To understand this point, it helps to highlight a key passage from Bush's address to the nation on Sept. 20, 2001, just nine days after the terrorist attacks that would define his presidency:

The terrorists practice a fringe form of Islamic extremism that has been rejected by Muslim scholars and the vast majority of Muslim clerics; a fringe movement that perverts the peaceful teachings of Islam.

Later he said this:

I also want to speak tonight directly to Muslims throughout the world. We respect your faith. It's practiced freely by many millions of Americans and by millions more in countries that America counts as friends. Its teachings are good and peaceful, and those who commit evil in the name of Allah blaspheme the name of Allah. ...

Can you imagine Trump saying any of these things?

Again, one does not have to condone Bush's handling of the war against Islamofascism to give him credit for  refusing to play into bigotry against Muslims. Especially in the immediate aftermath of the 9/11 attacks, Bush could have easily pandered to America's worst impulses by calling for a Muslim travel ban or fabricating stories about Muslims celebrating the deaths of American citizens. He never said, "I think Islam hates us," or any equivalent thereof.

Later in his presidency (well past the one-year mark), Bush would actually push for a moderate program of immigration reform, in stark contrast to Trump's xenophobic rhetoric and initiatives. Overall, while Bush was hardly a champion of pluralism and tolerance (see his policies discriminating against the LGBT community), he never stooped to the depths that we have seen under Trump.

3. Bush did not embarrass the office through his conduct in the same way as Trump.

To be fair, this isn't praise specifically for Bush, but rather for all of Trump's recent predecessors. Plenty of them have had gaffes and humiliations — Bush frequently got tangled in his sentence syntax, sounding dumber than he was; Bill Clinton perjured himself; Barack Obama ... well, no, he didn't have those problems — but no modern president has reduced the dignity of the office as much as Trump.

Dignity, like competence, matters. It would have been inconceivable to hear that Bush had started a feud with some celebrity who had criticized him, or had plugged a personal business venture while carrying out his official duties. Bush may have been ridiculed as an intellectual lightweight -- and with some justification -- but he never had an attention span so short that international organizations had to factor that in when they met with him.

I never thought I would see the day when I would defend Bush, even just by comparison. Back when I was an undergraduate at Bard College, I began my career as a journalist writing article after article that pilloried the 43rd president. I still believe that Bush's terrible policies played major roles in destabilizing the Middle East and causing the 2008 economic crash that resulted in the Great Recession.

Yet the fact that Bush was a bad president, perhaps one of the worst, did not mean that America couldn't stoop much, much lower. Unfortunately we now have proof of that premise.