Paradise Papers reveal the rise of a new class: The global oligarchy

Bono, the Queen and Wilbur Ross belong to a new class, untethered to nation or party. How can we fight back? 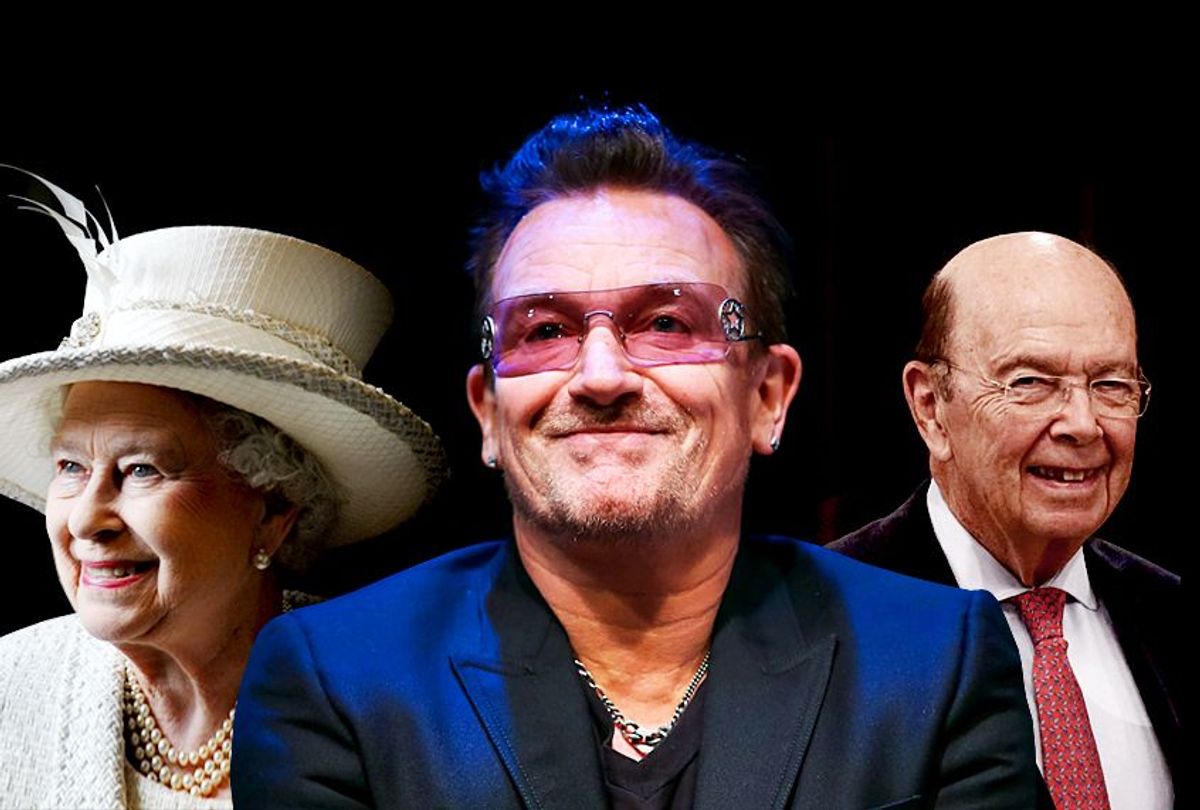 Facebook
Twitter
Reddit
Email
view in app
In response to the recent leak of 13.4 million files from two offshore service providers earlier this week, which documents how the world’s wealthiest individuals and corporations avoid paying taxes on their fortunes, Sen. Bernie Sanders, I-Vt., warned that the world is quickly becoming an “international oligarchy.”

“The major issue of our time is the rapid movement toward international oligarchy in which a handful of billionaires own and control a significant part of the global economy,” Sanders said in a statement to The Guardian, one of the major newspapers reporting on the so-called Paradise Papers. “The Paradise Papers shows how these billionaires and multinational corporations get richer by hiding their wealth and profits and avoid paying their fair share of taxes.”

A who’s who of prominent and wealthy individuals have been implicated in the Paradise Papers, the bulk of which come from the offshore law firm Appleby. This includes right-wing hedge fund billionaire Robert Mercer, rock star Bono, Commerce Secretary Wilbur Ross, pop star Madonna, Queen Elizabeth and many others. Multinational corporations such as Apple, Facebook, Uber, Nike, Walmart and McDonalds have also been implicated in the leaks.

That corporations and billionaires evade taxes by stashing their money offshore is hardly a revelation, of course. The Paradise Papers come about a year and a half after the Panama Papers — a leak of 11.5 million documents from the Panamanian offshore service provider Mossack Fonseca. These leaks do, however, provide an insight into the world of global economic elites and the rise of what is essentially an international plutocratic class.

“Appleby operates in a rarefied universe of U.H.N.W.I.’s — the industry’s abbreviation for ultra-high-net-worth individuals — where yachts and private jets are preferred transport and mansions sit empty because their owner has several others,” The New York Times reports. “The ranks of the superrich are growing fast, fueled by legitimate fortunes in finance, trade and technology — as well as drugs, embezzlement and bribery. And the offshore finance industry has grown alongside its customers’ accounts.”

This class of “ultra-high-net-worth individuals” is a relatively diverse group of people from around the world (though about half are American, and most are men), with different religious beliefs, different political views and different cultural backgrounds. But they all seem to share a kind of class consciousness. Global plutocrats of the 21st century tend to have more in common with (and more allegiance to) their own economic class than their own country, political party or cultural/religious group.

In some ways, this is nothing new: the wealthy have always been more aware of their own economic interests and social status than members of the lower classes, who are often driven (and divided) by social and cultural issues (much to the chagrin of labor organizers and socialists). In his classic 1956 book “The Power Elite,” sociologist C. Wright Mills discussed the class consciousness of America’s economic and political elite during the postwar period:

All the structural coincidence of their interests as well as the intricate, psychological facts of their origins and their education, their careers and their associations make possible the psychological affinities that prevail among them, affinities that make it possible for them to say of one another: He is, of course, one of us. And all this points to the basic, psychological meaning of class consciousness. Nowhere in America is there as great a "class consciousness" as among the elite; nowhere is it organized as effectively as among the power elite.

Sixty years after Mills wrote these words, the world has become increasingly globalized and so has the “power elite.” Plutocrats of this century are no longer as bound to their own country as they once were, and nowhere in our globalized world is there as great a class consciousness as among the billionaire class. The richest 1 percent of the world’s population now owns more than half of global wealth, and the eight richest men on the planet have more wealth combined than the poorest 3.6 billion people. As the Paradise Papers show, these “ultra-high-net-worth individuals” have no intention of spreading the wealth and will do whatever it takes — whether it’s hiding their money offshore or buying political influence — to further their interests.

All of this indicates that we are well on our way to becoming what Sanders calls an “international oligarchy,” where democracy is either nonexistent or treated as a facade, and elites have complete control over the economy. But this is not inevitable, and it is still possible to reverse this trend. To do this, however, working people will have to come together to fight for their own interests and challenge the status quo.

There are two forms of populism that are currently being offered as alternatives to international oligarchy. On the right, reactionary populists present the current divide between the 1 percent and the 99 percent as a struggle between “globalists” and nationalists, and seek to divide the working class by scapegoating minorities, immigrants and foreigners for problems that have been created by global capitalism. On the left, progressives and socialists aim to create an international working class movement that challenges both capitalism and the power of global elites.

So while the right promotes what Marxists have traditionally called “false consciousness,” which keeps the majority fractured and weak, the left promotes class consciousness and a politics of solidarity. It is not hard to see which side is truly confronting the power elite and offering a real alternative to oligarchy. It's not the side of Donald Trump but that of Bernie Sanders.