This year, Kurds voted for independence from Iraq, only to lose it weeks later. Here's what people were saying 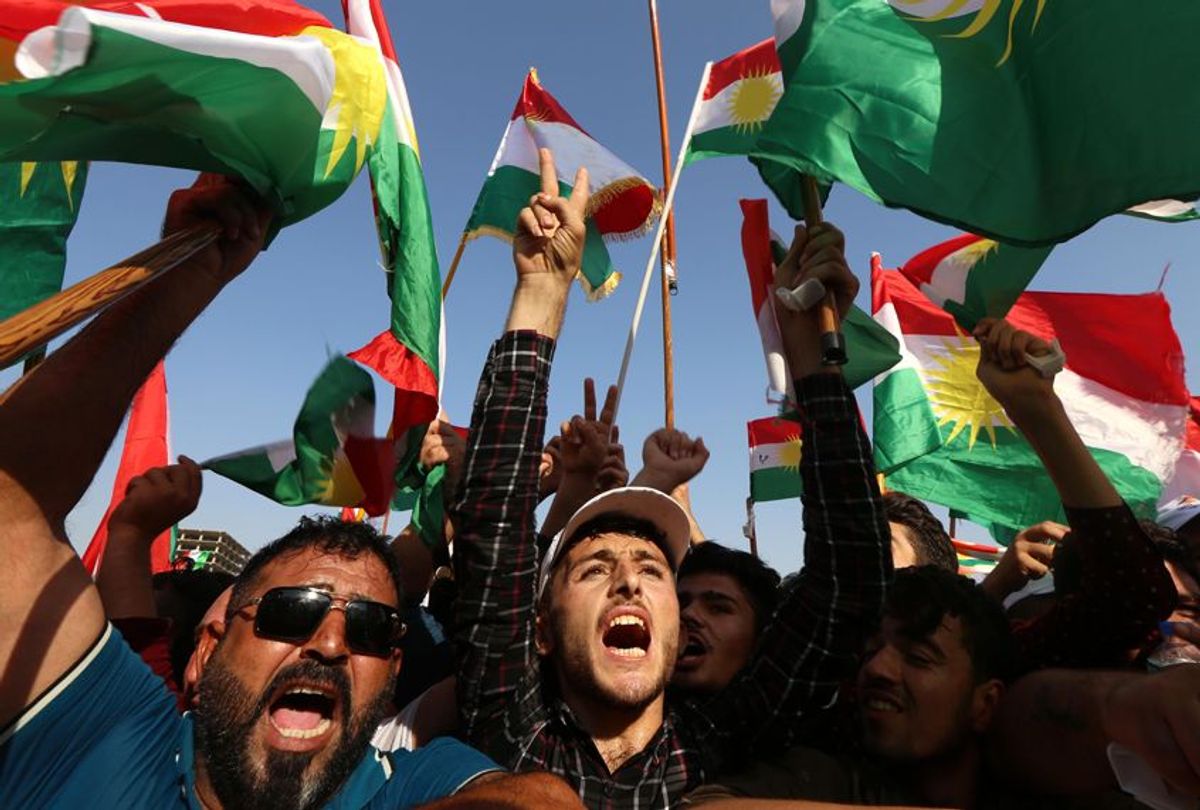 Iraqi Kurds fly Kurdish flags during an event to urge people to vote in the upcoming independence referendum in Arbil, Iraq, on September 22, 2017. (Getty/Safin Hamed)
--

“We are surrounded by enemies, man,” said Rebaz, a friend I’d met on CouchSurfing in Sulaymaniyah in 2011.

We were spending a holiday evening in a trendy tea-shop that whirred with the sounds of central air. “They say maybe Kurdistan is going to be a kind of second Israel in the — you know, man?”

This had been a half-joking refrain I’d hear half-a-thousand times in Iraqi Kurdistan: The second Israel. On September 25, in a massively anticipated referendum, Kurdish voters within the borders of the autonomous Kurdistan Regional Government voiced 93 percent support for their secession from Iraq.

But while Israel was born into international support, the Kurds didn't have the luxury of U.S. or U.K. backing.

What they had was Kirkuk — a city that has been at the heart of Iraqi-Kurdish tensions for decades — and sits on many billion of dollars of oil. In 2014, ISIS ousted the Iraqi forces that defended the city and then Kurdish Peshmerga ousted them; since then, Kurds had controlled Kirkuk.

On October 15, in response to the referendum, the Iraqi Army mobilized and retook the city.

“We don’t like the fact that they are clashing, but we’re not taking sides,” said President Trump. On October 25, the Kurdish government “froze” the voting results, effectively annulling them in one of the starkest never minds in electoral history. On October 29, President of Iraqi Kurdistan Masoud Barzani announced he would step down, advocating for his position to be dissolved entirely. The U.S. State Department commended his decision.

“They don’t want Kurdistan to be a — union country,” said Rebaz in 2011, under the air-con whoosh. “It will be the most powerful country in the Middle East, because of petrol.”

There is a Kurdish saying, voiced like a shrug in times like these: “Kurds have no friends but the mountains.”

Back when the results were announced, the Kurdish capital exploded, in joy and confusion and frustration and elation. I did what I normally did — to take the temperature of a region in crisis, if friends happened to live there — and slid into my DMs.

“Erbil, its kind of crazy right now / Celebration and fear all around,” wrote Erbil-native Mehmet, another CouchSurfer who’d picked me up from the Erbil airport in 2014 in a dark red Hummer. His Arabic-speaking parents grew up in an era when the country felt less divided.

Iraqi Prime Minister Haider al-Abadi threatened to embargo the Kurdish region if control of their borders and airports was not relinquished to the central Iraqi government by week’s end. Iran organized military drills and closed its borders with the Iraqi Kurds (there is usually a constant flow across the border, dividing Kurdish populations on both sides).

He worried about the international sanctions and threats of border closings. He wanted to come to the U.S. and feared he’d be trapped. “Israel’s backing [us] up, but it’s almost the only country,” he said.

For many, though, this long-awaited referendum smacked of 1776. Araz was born in Halabja, a city famous as the site of Saddam’s chemical-weaponed slaughter of his own people during the Iran-Iraq war.

Visiting Halabja in 2011, the hatred for post-Saddam Baghdad was obvious — but almost irrelevant: now the eastern Kurds, generally separated by dialect and political party from the capital, had beef with their own regional government. They cited misappropriation of funds intended for their revival, and a fetishization of their suffering — in the form of expensive memorials — with no real support to rebuild.

“Hey bro…. Never excited this much. Historic moment we are living in,” he wrote back. His family? “They are feeling amazing!” The international community? “Now the world has to live with it.”

I had expected him to feel exactly the opposite — to mistrust the leadership in Erbil. (In Kurdistan, as in Israel, once a band of kindred minorities becomes the ruling class, in-group/out-group borders are redrawn. Call it hypocrisy, or Freud’s “narcissism of small differences” or the necessity of party politics: someone always gets the short straw.)

The dueling Kurdish parties had maintained a modicum of internal unity in outward opposition to Baghdad. If ties to Baghdad were fully cut, though — internal divisions would take center stage. Rebaz wasn’t terribly worried then. “I hope that our leaders get a lesson from this experience that their unity is important.”

And then, within two weeks, Iraqi forces swept in easily to retake Kirkuk, and the world didn’t have to live with anything at all.

According to a Kurdish member of Iraqi parliament, as reported in London-based Asharq al-Awsat (“The Middle East”), Barzani’s Kurdish opponents had pulled out of their military positions in collusion with Iran.

No matter what, the move for unity had resulted in deeper internal fractures.

“It’s bad,” Rebaz texted in the days after Barzani’s resignation. “I don’t think independence is going to happen in 100 years.”

Two Decembers ago, as fighting climaxed to free the Iraqi city of Ramadi from ISIS and news reports were vague, I messaged Bakeer.

“F**k them brother soon they will be f**ked up,” he wrote back. And lo, a few days later, the city was recaptured by Iraqi forces.

“Take care my friend / and merry Christmas for you,” he said.

Last month, he was less excited to see his country potentially split apart even further.

“Feeling very disappointed!” Bakeer wrote me. “The people are very distressed to divide Iraq.” But, he said: “The vote is a bluff and I think it will become a civil war in Kirkuk.”

He was completely unsure how the outside world would react to the inevitable scramble for Kirkuk. “Unknown,” he said.

He used a word, majhool, that shares its root with an Islamic term for the era before Islam: Jahiliyya, “the time of Ignorance.”

But there are modern examples that could have served to predict the future: South Sudan and Kosovo both declared their independence in the last 10 years. And yet, those new states, like Israel in 1948 — despite their troubled inaugurations and, sometimes, an aftertaste of regret — had partial international support.

(“It was easier before,” I heard in Kosovo in 2014 — before it took at least one visa to leave their landlocked territory in the Balkans.)

In reality, “Kurdistan” appears most like a Second Somaliland, a region that fought a civil war (and won) with a collapsing state and now exists in near-total isolation, recognized by no one, minting its own currency.

The international community begs these stable places to stay put, like ballasts on a lurching ship.

Somaliland has and hosts no embassies. Its capital, Hargeisa, is home to consulates only of Djibouti, Ethiopia, and Turkey. Somalilanders without Somali paperwork find it nearly impossible to travel. But Somaliland never backtracked on independence. And Somaliland doesn’t have oil. If there is one difference between Kurdistan and Somaliland, it is that the wider world simply doesn’t care.

(Tonight, I got another text from Mehmet. He made it to America after all. This is the power the world’s powers seem to hold over all those who feel ill-defined by their political boundaries: in return for your nation, you can leave it.)

If the gears of Kurdish secession had begun to turn in earnest, regional powers would have been forced to adapt to a kind of terra incognita in the Middle East, one in which the domestic authorities would control enormous wealth and exist beholden to far fewer allies.

But it is harder and harder for the voices of a few be tallied against the interests of the entire world. International networks are denser now, and the resulting structures are more resilient to fundamental change.

Last month, after a referendum to secede from Spain, Barcelona echoed Erbil. The vote — to break from Spain — passed with a similar (albeit disputed) 90 percent count.

Catalonia is Spain’s richest region. Neither regional nor international powers supported their independence, and in their bid to self-determine on an international stage that no longer champions that ideal, Catalonia lost ground. Like a Second Kurdistan.

Adam Valen Levinson is the author of "The Abu Dhabi Bar Mitzvah" (W.W. Norton, November 2017), an extremely personal travelogue into Iraqi Kurdistan (and Somaliland) and other parts of the Middle East during the Arab Spring.