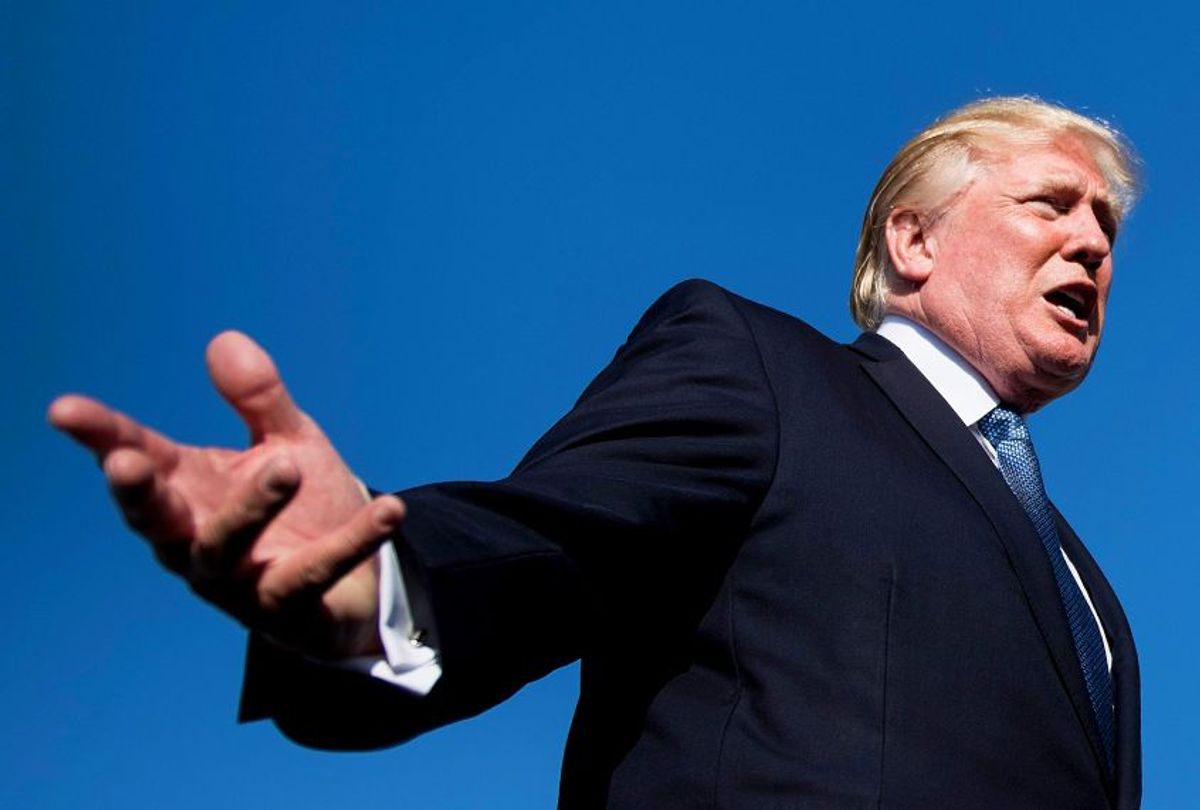 President Donald Trump and his supporters have a screwy definition of patriotism. Apparently, it’s a career-ending infraction to kneel during the national anthem during an ultimately meaningless football game, but it’s acceptable for our chief executive to endorse the assurances and actions of foreign despots while summarily rejecting the decisions of American leaders, publicly and with awkward pride. It’s difficult to see how these contradictory ideas make a lick of sense coming from the same faction, and the same president, roughly at the same time.

Most of us are old enough to remember when Trump, during his inaugural rage-gasm, declared that his presidency would be all about putting “America First.” It was a “new decree,” he said, that would be “heard in every city, in every foreign capital, and in every hall of power.” He continued, “From this day forward, a new vision will govern our land. From this day forward, it’s going to be only America first! America first!” This was his central inaugural theme and an ongoing refrain of his presidency. Part isolationism, part patriotism, all meaningless when shouted from his orange yapper.

Unfortunately for Trump, his words have no meaning. None at all. He might as well have screamed a stanza of pure gibberish, because if “America First” is the centerpiece of his incompetent and destabilizing presidency, then he’s utterly failing to live up to that ideal, among so many others.

It started last week while Trump was a guest of Chinese President Xi Jinping. You might recall Trump’s previous bromance with Xi, who was enjoying what Trump described as “the most beautiful piece of chocolate cake that you’ve ever seen” in Mar-a-Lago, all while Trump reviewed top secret intelligence about Syria less than two feet away. The dumbness of the scene aside, Trump seems to earnestly believe Xi’s state visit bonded the two leaders and made them besties. So Trump seems to operate under the false assumption that Xi’s alleged friendship outweighs the interests and reputation of the United States.

What conclusion should we draw other than this one, especially given Trump’s remarks about China last week? Trump tweeted:

In other words, it’s okay for China to “rape” our economy (Trump’s words during the campaign), because American economic and international leadership is clueless. Worse, Trump said he, too, would have taken advantage of clueless Americans. Trump is taking sides here against his own country in support of Xi, his Asian BFF. Not only that, but he’s indicting Americans while praising the Chinese at the expense of our economy, and all while standing on Chinese soil.

It wasn’t that long ago when Republicans excoriated presidential candidate Bill Clinton for protesting against the Vietnam War while visiting England as a student -- you know, a little more than 20 years prior to the 1992 election. Sure, ‘92 was a different time and a nobler GOP, but the contradiction remains.

More recently, Republicans -- including Mitt Romney during the 2012 campaign and, of course, Trump himself -- repeatedly flogged President Obama for supposedly “apologizing” for America. In reality, Obama merely pointed out how some people overseas have viewed certain American actions and attitudes. Trump, on the other hand, directly called out Americans who evidently “had no clue,” in order to elevate the predatory actions of Xi and the Chinese. Obama never went that far, nor was he ever that derogatory. If Obama had ever said anything remotely close to what Trump said last week, Obama would’ve been swiftly impeached, following a roundelay of exploding heads on Fox News Channel.

Next stop for Trump’s “Clueless Americans” Tour was Vietnam, where Trump palled around with his mentor, Russian strongman Vladimir Putin. After Putin and his Padawan learner met in Da Nang, Trump told reporters, “He said he didn’t meddle [in the 2016 election] — I asked him again.” The president added, “You can only ask so many times. I just asked him again. He said he absolutely did not meddle in our election. He did not do what they are saying he did.” Later, aboard Air Force One, Trump said, “Every time he sees me he says, ‘I didn’t do that,’ and I really believe that when he tells me that, he means it.”

The best response to Trump came from Sen. John McCain, R-Ariz., who said, "There's nothing 'America First' about taking the word of a KGB colonel over that of the American intelligence community.” On top of accepting the word of Putin over his own intelligence services, Trump once again stupidly endangered his own presidency -- by giving intelligence operatives still more motivation to leak additional details about the Trump campaign's possible collusion with Russian agents during the 2016 election.

Possibly knowing this, Trump walked back his remarks later. “As to whether I believe it or not, I’m with our agencies, especially as currently constituted with their leadership,” Trump said. He surely doesn’t act like it, given that he hasn’t done a damn thing to stop Russian efforts to undermine our sovereignty and our democratic institutions. And we know from the testimony of the FBI and NSA heads, as well as the director of national intelligence and others, that Russian attacks will only worsen as time goes on.

Trump famously told one of his cult-like rally crowds that any football player who kneels during the national anthem should be “fired!” So what’s the penalty for a president who stands on foreign soil and condemns Americans for being clueless, while defending the foreign exploitation of our economy and dismissing an ongoing attack against our democracy? It’s difficult not to add this to the lengthening roster of treasonous deeds by Trump and all his men. How has this also not enraged the patriotism-purity cops, who are boycotting the NFL but continue to proudly wave the #MAGA flag?

What we know now is that according to Trumpers, supporting their president takes priority over condemning his obvious lack of patriotism as well as his baffling contradictions. Trump’s diehard supporters don’t seem to understand that they can continue to support Republicans and oppose Democrats without dragging themselves down to Trump’s abysmal level. Instead, they continue to contort themselves into ideological pretzels in support of their leader.

For Trump and his people, patriotism has become strictly a matter of brand loyalty rather than an ideal in and of itself. If a black guy at a football game makes a silent statement about racial injustice, he’s condemned and rendered incapable of participating in professional sports. If a white Republican president eviscerates both American leaders and the American intelligence community, while defending one or more semi-hostile foreign governments, he still gets to enjoy an 83 percent approval rating among his base.

This illustrates a rapidly vanishing, if not entirely absent, set of core values among so-called conservatives, replaced by a superficial and blind allegiance to everything Cult Leader Trump says, no matter how ridiculous, even if it directly contradicts their own recent attacks against the other team. In this toxic new paradigm, we have to wonder how low the Trumpublicans will descend in their hive-mind adoration of their leader and their brainwashed hatred of all things anti-Trump, including other Republicans who dare to have something approaching a backbone.