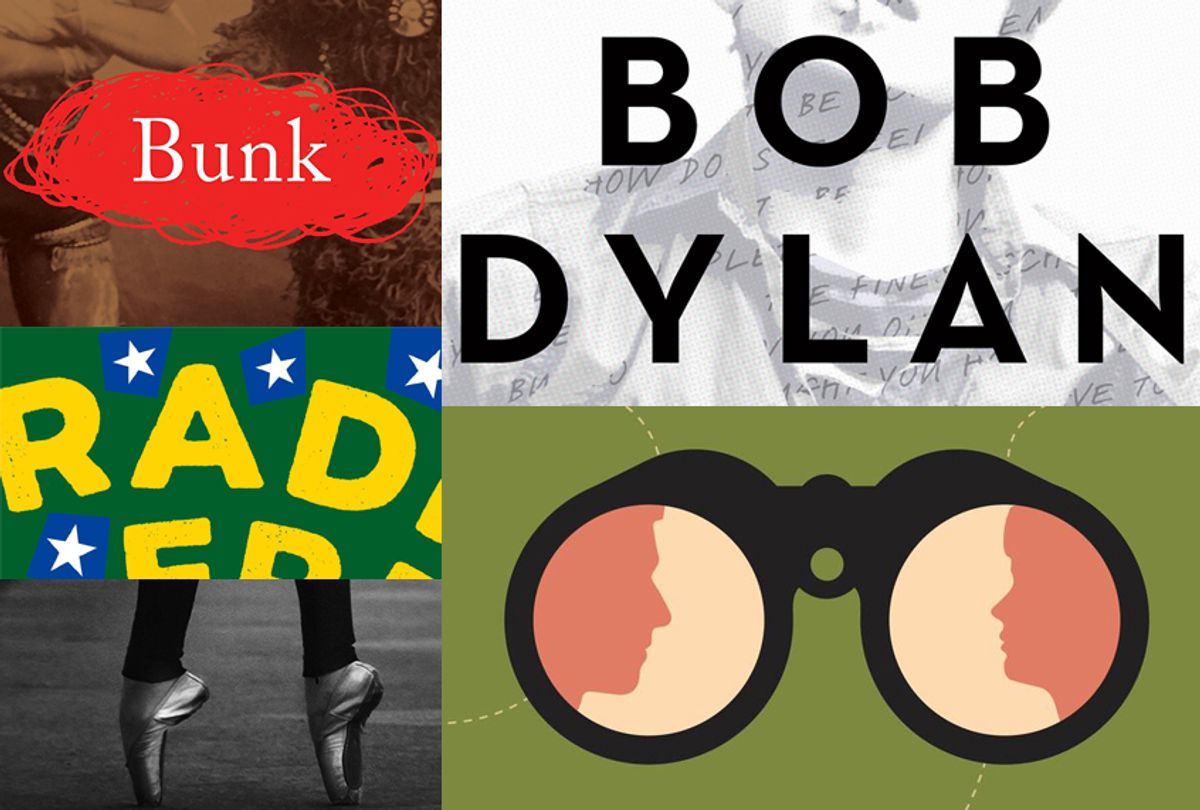 Garth Risk Hallberg: The binoculars on the cover could have been a kaleidoscope: inside is 21st-century family life seen through the crazy swirl of all the books I loved when I was 24. It's like my attempt to mediate in my parents' divorce. My parents John Cheever and Gertrude Stein.

Bill McKibben: Standing up (via sitting in), local beer, late-‘60s non-Motown soul music, the roots of podcasting and/or the natural successors to Paul Harvey and, mostly, resistance.

Richard Thomas: The genius of Bob Dylan across more than half a century, poetry and song, folk, blues, gospel traditions, the art, how a classic comes into being, aesthetics of melancholy, faith, life, love, death, performance artistry, how experience, observation and imagination conspire.

McKibben: When I was a boy I lived in Lexington, Massachusetts, and my summer job involved donning a tricorne hat and giving tours of the Battle Green, whereon began the fight against imperialism and colonialism. It taught me early on that there was nothing unpatriotic about dissent; rather, the opposite.

G'Sell: French asceticism and French New Wave. Classical ballet and police brutality. Getting hit by a car and smashing the windshield while wearing a magic hoodie. Late '80s sugar cereals that have managed to survive.

Hallberg: Well, there's a force that pulls things together and a force that blows things apart. At the time of the writing, in 2003, I felt like fragmentation had the upper hand, in life and in art. But I grew up Episcopalian, so I felt — still feel — this need to draw things together under one roof. To say, no, you belong here, experimental French thing, and you, too, domestic realism. And you especially, "Choose Your Own Adventure." Talk amongst yourselves.

Hallberg: Third graders: people on whom nothing is lost. Me: their teacher. Ha, ha. Also: terrorism, anthrax, Iraq War, D.C. sniper, months we couldn't use the playground, running zigzag across parking lots to frustrate bullets. And drinking. Giving way to writing. Alertness, rawness, sadness, funniness. Lifeness. Meditations in an emergency.

McKibben: Being put in handcuffs/paddywagons with some regularity; failing to save the planet.

G'Sell: Living alone in Berlin before the Palast der Republik was torn down. Living with someone in Barcelona and feeling suddenly alone. Making a living, living large, retiling my Midwestern kitchen floors. Calculating the area of a scalene love triangle. Protesting in the streets, tripping on my laces, and road tripping thousands and thousands of miles in a rental car with my dog.

Young: I generally try not to read reviews. But people sometimes call me “prolific,” which I’ve come to accept.

Thomas: “Pessimistic.” My day-job writing deals a lot with “melancholic” aspects of poets like Virgil and Horace — and now Dylan — a much better word, and an optimistic word.

Hallberg: I have complicated feelings about "ambitious." Like, I don't want to read anything that's not ambitious. But then if something was successful, would you even notice the ambition? Then again, "successful" is a word that really gives me hives. If you're succeeding, maybe you're not trying hard enough.

G'Sell: "Confessional." I have nothing to confess. And my work is only loosely autobiographical. Smuggling a shiny set of ovaries does not a confessionalist make. I love a lot of confessionalist writing. But that's not what I do.

Thomas: Being Bob Dylan. Or a lumberjack.

Young: Guitarist for a good band, or bassist for a bad one.

Thomas: I generally write for people who study Greek and Latin, with too many footnotes. Not sounding too academic is a goal.

McKibben: Sometimes I’m funny. I can’t bear to write about or imagine violence/people getting hurt, which might limit possible plots.

G'Sell: As a culture critic and long-time teacher of how to spin a sentence, I think my work displays (flaunts?) a dexterity — or audacity — with punctuation more common to prose than contemporary poetry. I would like to be better at not relying on that dexterity to seem intelligent and sophisticated.

Hallberg: I guess character is where I start, and everything beyond that is a mystery. I remember part of the formal dare here was to write a book without dialogue, because I was so bad at it. I failed, but learned a lot about dialogue in the process.

G'Sell: I pretend I am Donald Hayne, the guy who played the Voice of God in "The Ten Commandments." #burningbushforever

Hallberg: Well, I'm drawn to all the unpublishable lengths — triple-decker, novella — so I guess I try to protect the reader by writing things that will never see print. Failing that, I remind myself that I've always been curious about what other people had to say, and to assume readers are like that, too. That's the price of admission to the little society of readers, right? A bias toward being interested?

Thomas: Because I wrote it about Bob Dylan. He’s been reading what I — and very few others — have been reading all my life. I hope that works some.

McKibben: Sadly, my track record has been fairly good. I wrote the first book about what we then called the "greenhouse effect," way back in 1989 — which means that those who had the good sense to listen to me then have had 30 extra years to worry about it.